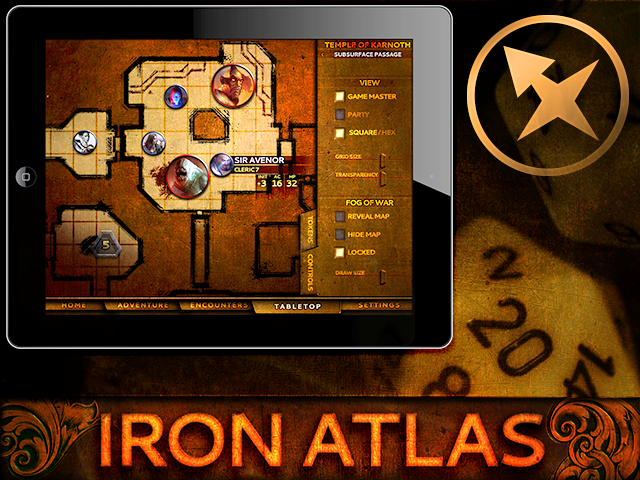 Lifeform Entertainment has launched a Kickstarter Campaign for new a mobile app called IRON ATLAS. It’s a “Digital Miniatures System” designed for the iPad to serve as an alternative to physical maps and miniatures for roleplaying games — and Kobold Press maps and character art content will be available on the IRON ATLAS in-app store!

IRON ATLAS takes many of the elements seen in traditional, PC-based Virtual Tabletop systems (VTTs) and optimizes them for use on mobile devices. The app’s streamlined UI keeps it simple, elegant, and focused on the basics for combat, plus providing tons of content for you to pick and choose for YOUR game.

With IRON ATLAS, you’ll be able to rapidly build encounters with simple drag-and-drop gestures, put those encounters on maps taken directly from the books and adventures for your favorite publishers, and play just like you would using physical maps and minis.

“We’re very excited to have Kobold Press as one of the amazing publishers that will have their maps and character art content inside the IRON ATLAS in-app store,” says Lifeform Entertainment’s Lead Designer, Eric Cagle. “Wolfgang and the writers, artists, and cartographers that contribute to Kobold Press have a very high bar of quality that we’re proud to show off.”