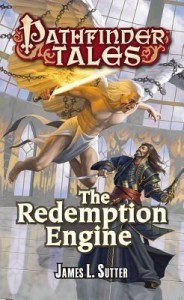 Salim Ghadafar is an atheist who happens to be the catspaw of the goddess of death. Yes, you read that correctly—he serves a goddess he doesn’t believe in. When the worst of the worst show up dead, yet their souls are unaccounted for, Salim is dispatched to find those souls. His first stop is the anarchic city of Kaer Maga. While there, he finds clues that lead him to Heaven and Hell. Along the way, he meets a cast of characters that would have P.T. Barnum salivating. Salim must find the lost souls, no matter how despicable they may have been in real life, and he must do so while trying to figure out whom he can trust and how he can avoid becoming more indebted to a goddess he doesn’t believe in.

The Pathfinder Tales once again prove that just because a book is based in an RPG setting, it doesn’t mean that said book can’t be deep and thought-provoking. This is a bit of a weighty tome; the paperback version I read came in at 509 pages of story with additional pages containing the always appreciated glossary beyond the story. This novel is as weighty in concept as it is in length. Sutter combined steady action with addressing some of the most esoteric concepts that can be tackled in fantasy writing. Combined with the subject matter are some interesting characters that continue to develop along with the story.

I am a fan of the art used for the covers of the Pathfinder Tales books. I got into this book and was ready to slam the Paizo folks for making the cover a huge spoiler. I wasn’t even halfway through the book when I was convinced that the well-executed cover had a flawed concept: Thank you, Paizo, for proving me wrong. The cover depicts a pivotal scene, but it in no way spoiled who the actual culprit in this story was. Because I have read many books, I have seen several fantasy publishers spoil some great fantasy intrigue stories with well-drawn but poorly thought-out cover art.

Now for the characters. As is to be expected, there is a wide variety of characters of all sexes, races, and even species. Their personalities are as varied as their physical aspects are. Roshad and Bors are two men from the Iridian Fold that Salim encounters early in this story. Homosexual encounters in fantasy novels are nothing new and have been on the rise in the last few years, and this couple appeared to be yet another way for an author to jump on the bandwagon, and once again this novel proved me wrong. Yes, Bors and Roshad have a homosexual relationship, but the physicality of their relationship was so minor as to be almost nonexistent. Being from the Iridian Fold, their bond and relationship is so much deeper than the physical aspects that you might expect. Sutter did something beautiful with these two characters: He took a hot-button topic and applied it to a philosophy that not only transcended the physical, but in many ways the typical emotional bonds that are normally formed in our real world societies. I can’t possibly do justice to Sutter’s take on this, but pay close attention when Roshad describes his relationship to Bors and the philosophy behind it. No matter what your personal feeling are on this subject, I can assure you it will blow your mind.

Salim, the main character, is both exciting and deep. The fact that he is an atheist in the service of a goddess is the first indicator of his complexity. The powers that his goddess, who really isn’t his goddess, make Salim formidable. During the course of the story, we quickly learn that even without those powers he is still a BAMF (I’m sure it says that on his wallet). Many of the foes that Salim faces would be insurmountable without assistance from a higher power or at least more powerful beings, and his magical sword doesn’t hurt his cause either. In his very subtle way, Sutter made the biggest conflict that Salim faced internal. There was plenty of action throughout the story, but the most significant conflicts come from within. Through the course of this story, I enjoyed watching Salim grow without compromising himself, too much.

Now for the story: Wow, just wow. This is a deep story. Sutter tackles so many deep issues and still keeps the action nicely paced and everything interesting. For the hack and slash fans, there are some gaps between fights that might turn you off; stick with it because it is worth it. Sutter tackles a rules book worth of concepts into a fluid story that never overwhelms the reader. Sutter explores such lofty subjects as law vs. chaos, love, alignments, heaven vs. hell and redemption to name just a few. I could actually see this book as an unconventional teaching aid for college-level philosophy classes. But even with all of the weighty concepts that Sutter engages, he keeps things on terms that the average reader can understand. As a reader you can easily delve into his take on these concepts, but it isn’t a requirement to enjoy this story. His blend of addressing high concepts and well-written, descriptive action sequences made this one of the best fantasy books I’ve read in a long time.