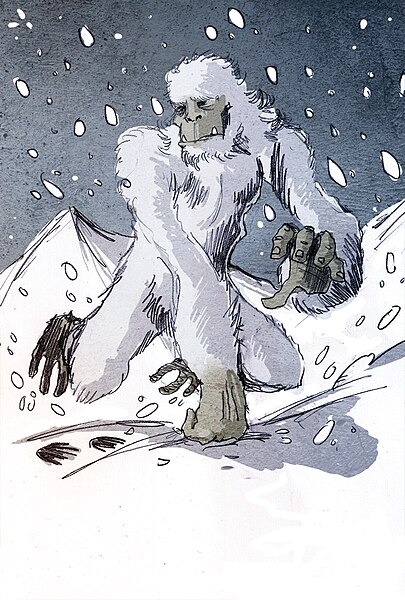 With broad shoulders and thick, nearly translucent ivory fur, this powerfully muscled ape-man sports savage claws and wicked black teeth; dried gore stains its chin a rusty brown. A small cyclone of ice and snow swirls around its feet, and it leaves no tracks in its wake. Fiercely cold air surrounds it, and each steamy exhalation turns to momentary fog before being carried away on the wind. It howls a deep, bestial roar, and from the snows rise three more icy forms, glittering in the light.

The monks of the Khyung Sagarma monastery and the Path of the Umbral Veil claim the yeti are the reincarnated spirits of greedy villagers or unrepentant bandits, now forced to walk the roof of the world in perpetual cold and hunger. They say that the yeti’s only hope for a proper rebirth and good karma is to use a yeti’s heart to restore a hero to life, and profess the ritual works even if little remains of the hero’s corpse. Some who hear those tales come to the Rachyyas-Gri Mountains to test the story’s truth in desperate hunts where many that hike into the snow never return.[More…]

Combat Advantage
The Frostfang Yeti deals an extra 2d6 damage on melee and ranged attacks against any target it has combat advantage against.
Shades on the North Wind (standard; daily) • Summoning
With a scream, three Frostfang Shade minions appear within the Yeti’s aura. The Frostfang Shades may leave the Yeti’s aura after being summoned. Commanding these minions is a free action and each one may receive different instructions.
Into the Drifts (move; recharge 4 5 6) • Illusion
As long as the Frostfang Yeti is standing in an area of snow or ice, it may turn invisible and move up to its speed. It remains invisible until it attacks or is hit by an attack. The Yeti cannot use this power while bloodied.

Frostfang Yeti Tactics
The frostfang yeti uses its cloak of the blizzard and then moves into position with into the drifts. While sustaining the burst, it selects the best target and closes the final distance, attacking with its spinerender smash. It maintains the cloak of the blizzard throughout the battle, relying on its cold resistance to move through the effect and using it as an obstacle for enemies. The frostfang yeti turns invisible as often as its into the drifts power recharges. If it can isolate a foe, it utilizes shades on the north wind to summon additional minions and press the advantage—usually waiting until it is bloodied and unable to turn invisible.

Frostfang Yeti Lore
A character knows the following information with a successful Nature check.
DC 15: Frostfang yeti skulk in high alpine ice fields, snowbound forests and glacial moraines. They hunt for travelers and merchants braving mountain passes, seemingly appearing out of the very snow.
DC 20: Frostfang yetis command the very winter wind and snow—creating intensely cold cyclones that obscure sight or block an escape route.
DC 25: The scream of a frostfang yeti summons icy shadows of the creature that share its bloodthirst. A well-placed blow dispatches them with a frosty explosion, but their death blinds nearby foes.
DC 30: The heart of a freshly killed frostfang yeti can substitute for the component in a Heroic tier Raise Dead ritual, regardless of the state of the body or the time since the hero’s death.

Encounter Groups
Ambush predators with a malicious streak, frostfang yetis hunt alone or in pairs. Strangely persistent minions and the restless dead of previous kills swallowed by the snows before the yeti could consume their flesh occasionally accompany them. Very rarely, giants capture them and press them into service as enslaved hunters.

Like the 4E monsters this week? Let us know what classic D&D creature you’d like to see next.