Skip to content
Home / Delve into the Depths in the Kobold Blog / Your Whispering Homunculus: 20 Daft Bets & Dares 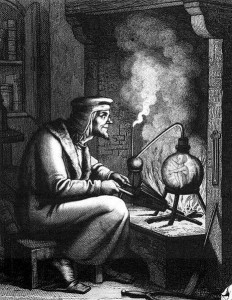 Your desk groans under the weight of hefty tomes, journals, maps, papers, and librams. The floor is littered with the rolled husks of half-considered ideas and mistakes. At last, you sit back in your armchair, your work done. The adventure has been crafted to your satisfaction, all the major encounters detailed, every option considered.

Suddenly a twisted creature hops onto the desk; the homunculi is grotesque, a vile leathery thing of insect and rat and slime topped with a doll’s face. It hops onto your shoulder and whispers in your ear “but master… what happens if…”

Welcome to the “Your Whispering Homunculus,” a series designed to spice up your game, to help you pass a moment of writer’s block, or just to entertain you for a moment. The homunculus is a vile thing, but useful: it whispers ideas, it considers the unthinkable, it helps its master. With it, you’ll discover lists and suggestions, rule variations, one-off ideas and flotsam—a small bit of crunch and fluff to use as you wish in your day-to-day adventures…

The journey has been long, and at last, the adventurers find a cozy fireside to park their battle-wearied limbs by, to enjoy a quiet night of fine ale and polite conversation.

The appearance of strangers is likely to bring out the worst in people, and the sight of all that well-honed muscle is likely to cause a few jealous looks from locals anxious to keep their admiring partners to themselves. Here are 20 ludicrous bets and dares that the locals make with the PCs to try to get one over them, including how to resolve them. PCs beating the villagers may either be regaled by the villagers or resented, depending upon how they play the encounter (at GM’s option).

Using magic, of course, is cheating…

1          Tam Wadly says he can eat a bucket of raw potatoes quicker than any of you: Best of 5 opposed Con rolls versus Fat Tam’s Con of +5 wins. Make a Fortitude save (DC 12) at the conclusion or be sickened for a day.

2          Lub Squirmly reckons he can drink a bucket of milk faster than any of you strangers: Best of 3 opposed Con checks, Lub’s is +5, again end the bet with a Fortitude save (DC 12) or be sickened for a day.

3          Zort over there says you’re all sissies, and he’s got a game to prove it—coal swallowing—hot coals of course…: Coal swallowing is dangerous and Zort can only manage 3 pieces before he gives in; the first lump causes 1d6 damage, the second causes the eater to be unable to speak for 1d3 days, and a further 1d6 damage. Subsequent coals deliver 1d6 damage and add 1d6 days to the time before the character can talk again.

4          Poxly says he can juggle four flaming torches at once—and bets you can’t: Best of 3 opposed Perform checks against Poxly’s +8, checks of 15 or lower may result in injury from the flaming torches; jugglers must make a Reflex save (DC 15) or take 1d6 damage.

5          Bedpan Hambly can pluck a pheasant faster’n any of you strangers can: Plucking a pheasant is based on opposed Dex. Bedpan Hambly, as an expert, gets a +5 modifier in total. Anyone that has Profession (pheasant plucker) can substitute that roll for the check.

6          So you think you’re tough eh—well how about a boar wrestling contest?: Use the standard boar statistics (Pathfinder Bestiary), but since the boar is oiled before the fight takes place, increase its CMD by +4. Weapons and armor are not allowed. The boar fight takes place in a small corral outside of town.

7          Only girls fight with swords in this village. Nape over there wants a proper duel with you—using greased pigs…: Again use the boar statistics, but the 5 pigs in the farmyard don’t fight back, they are harder to hit, add 4 to their AC due to the grease. The idea is to manhandle the pigs from a central muddy pen and into a sty 10 ft. away (which is harder than it looks). The PC must win 3 consecutive opposed grapples to do so, the first one to get 3 pigs out wins. Consider an opponent has a base attack of +3, a CMB of +6, and a CMD of 18.

8          Tough are ye? You strangers are all the same, pansies! Now, how about a game of Blind Man’s Reap?: Blind Man’s Reap is played between two people in the old Ricket’s dark Barn. The opponents are blindfolded and use blunted scythes to beat each other with. Use the standard fighting in the dark rules for blindfolded combatants. The scythes deliver subdual damage only but can critical. Consider an opponent has a base attack of +3, a CMB of +6, a CMD of 18, AC 12, and 25 hp.

9          Round these parts, we play a game called Hotfoot: Hotfoot involves a large roaring fire and bare feet. The opponents lie side by side and are moved 6 inches closer to the fire each round with feet outstretched, until their feet are actually in the fire. The first round causes 1 fire damage, the second 1d3, third and subsequent rounds cause 1d6. Any normal villager can last only 4 rounds, so if PCs manage more, they win.

10      We never respect any stranger unless he kisses Old Maud on the lips three times: Old Maud is the village cow, but she suffers from an appalling skin complaint manifesting itself in boils around her mouth that may, or may not, be catching (it’s up to you).

11      A man’s not a man in this village unless he climbs Old Slippery: Old Slippery is a 60 ft. high greasy limestone cliff face with virtually no hand-holds. The climb DC is 25.

12      Any stranger who swims Old Fleb’s Muddy Mire earns our respect: The 100 ft. wide pond is nauseating as all the local slurry pits drain directly into it, anyone swimming across must make a Fortitude save (DC 10) or be nauseated for a day, the swim DC is 10.

13      Well now, we have some strangers! So do we have anyone brave enough to play Tenbber’s Folly?: Tenbber’s Folly involves crossing over a huge slurry pond by balancing along a slender tied rope. The PCs face a race against Tenbber himself, who has an Acrobatics of +6, the rope is 25 ft. long, and a fall involves a very unwelcome odor and a chance to be nauseated for a day (see #12). The balance DC is 25.

14      Any of you strangers man enough to mount Cip Pickle’s Bull and stay on him to a count of thirty?: The bull is a fearsome beast, and the ride DC each round is 30, those who fall may be trampled for 1d6 damage unless they make a Reflex save (DC 12) to leap from the corral.

15      Sheep shearing—that’s a man’s job. Reckon you can beat wizard Tobber in a contest?: Tobber is a wizard at shearing, each contestant has six sheep, and sheering each requires the dexterous use of shears: roll 6 opposed Dex’s (count Tobber as +5) to see who wins. If your campaign has profession (sheep-sheerer), substitute that skill roll instead.

16      You see them troughs outside? Well, Lungy Lubwell can go underwater and hold his breath longer than any of you lot can: Use the holding your breath rules (Pathfinder Roleplaying Game). Lungy has a CON of 17.

17      Juggling live chickens—now there’s something Batham Jup excels at. I guess you strangers wouldn’t be up to that?: 3 opposed Perform checks here against Jup, who has a Perform of +8; however, the PCs are given three especially lively chickens and their skill checks are at -4.

18      We play a little game called “Ten Sacks and a Dozen Yards of Rope” round here, I says you strangers would be too sissy to take part: The game involves two contestants being trussed up with sacks and ropes, which require 3 escape artist checks (DC 25) to escape from. Slippery Dabe usually goes for the locals as he has a +9 escape artist check. If you like make it more fun by throwing the contestants in the duck pond at the start. Slippery has 10 Con.

19      Keppum’s Bog is a little over 22 ft. wide—how about a little jump off between you and Leg’s Ocker?: The 22 ft. wide bog, requires an Acrobatics check (DC 22); failure indicates the character has fallen into the mire, which has the consistency of quicksand (Pathfinder Core Rulebook). Ocker has an Acrobatics of +10 and a base speed of 30 ft. If both contestants succeed, jump again.

20      We play a fun game round these parts—Wood Axe Chin: Wood Axe Chin involves balancing a wood axe—handle down—on your chin and holding it there for the maximum amount of time. Each round requires an Acrobatics check (DC 15) or the axe falls, making a +3 great axe attack on you. The PCs may be disturbed to see the number of huge gashes in the chin of Tallow, their opponent, who has +5 Acrobatics.