Skip to content
Home / Delve into the Depths in the Kobold Blog / Your Whispering Homunculus: All Smiles, Part Two 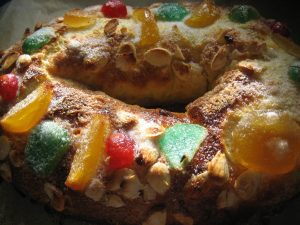 “Is he still there?”
“Yes, master. Ah, you’ve changed your mind and are going to let him in from the cold? Kind master.”
“Not at all. I want to drink this brandy and eat this cake from the window where he can see me whilst he shivers outside.”

Continuing our dark look at the season of goodwill, here are a few more ideas for unusual or unexpected events to throw at your players.

What a tale you can spin when your players receive an unexpected gift from their enemy. The offering must surely be a trap or a trick—a wolf in sheep’s clothing, a Trojan horse, a poisonous fruit—mustn’t it?

The trick to use here is to have the gift run contrary to the PCs’ expectations—no, it doesn’t radiate evil; no, it isn’t a devil’s amulet—but BAD it most certainly is. Surely. Your players are going to instantly, in all likelihood, wish to distance themselves from the object in question; an absolutely brilliant way to double bluff them. Let’s run with this idea briefly with an example: the PCs’ sworn enemies send them a battered old banner as a yule-tide gift. It is left outside their lodgings or presented by some innocent intermediary with a clear message about who it is from but not what it is. The PCs may keep the banner, which does not radiate any kind of magic, they may destroy it, or they may cast it away.

In truth—on this occasion—the banner belongs to a group of fey, from whom it was stolen. It is an object they hold above all others as sacred, in a symbolic way, and now, the PCs either have it, have given it away, or have destroyed it. The fey, of course, have no idea how it came to be stolen and distrust all humans accordingly. They have used their limited magic to trace it this far, however. This is complicated by the fact that amongst the fey is a very powerful creature with a particular loathing for humans.

How does the adventure proceed now? If the PCs have the banner, they can hand it back, but are they viewed as the thieves? A great little interaction awaits when the PCs are accused of stealing the object despite their innocence. Or the PCs may no longer have the object; in which case, who has it now? Does a chase or encounter occur with someone or something who has taken it? Or worst of all, have they destroyed the sacred object out of their own hatred for the people who gave it to them?

Then comes the sting in this adventure’s tail. The fey are facing a battle against some recently arrived terror, and time is terribly short. The PCs are in the melting pot, and their actions may swing the fate of the feys’ kingdom. And guess who has sided with the feys’ enemies—that’s right, the PCs’ own adversaries.

It’s also worth thinking on the possibility of gifts of tainted lands, of unwanted allies, or potential spouses as other options to this most unwelcome of presents.

We’ve all had them: the guest that never leaves, who eats all our food and drinks all our beer. This premise makes a great one-shot adventure or possibly a way of leading into an avenue of adventures. The visitor may be a relative or, perhaps, is forced on the PCs by a lord, lady, or powerful benefactor—possibly, even as a test. This is fantasy, however, so this troublesome guest is really, really troublesome.

The black sheep of a family offers a good option here, so let’s run with one option: one of a PC’s own kin has got herself into the most hot of hot water and upset something BAD. Quite how bad is left to you, but always strive for something that makes your players doubt your sanity—at least superficially. A demon, powerful evil wizard, lich, or anything similar makes a good start. Make it uncomfortably high in its challenge but not insurmountable. The PC’s kin, of course, flees to the one place she feels safe—the home of her powerful adventuring family member—and begs sanctuary. The PC is now on the back foot: does he throw out the relative (who blatantly wronged whatever is searching for her) and leave her to possibly die, or protect her and risk dying himself?

The wronged foe sends its minions to deliver a simple message: deliver the relative or die. Its minions then await the answer and, in all likelihood, a short violent exchange occurs. The PCs then risk being embroiled against the foe themselves, putting their own loved ones at risk, so the matter escalates beautifully into a nice backdrop to events. The PC may turn away from the plea and let justice—of a sort—be done. The simple trick here is to put your players in a quandary that doesn’t have a good result and see what comes out.

Next, we’ll take a final seasonal look at this aspect of adventuring and discuss the potential that reconciliation is never impossible…

For even more great adventuring loveliness from Meister Pett, check out Grimalkin.