Skip to content
Home / Delve into the Depths in the Kobold Blog / Encounter Codex: The Eye of Ihmrahotep 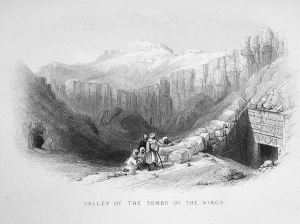 Encounter Codex presents encounters that can be quickly slotted into any adventure. They are system neutral and easily adapted to any edition (and other games for that matter) with little effort—just add stats from your favorite monster manual.

A radiant yellow orb—like a miniature sun—gleams from beneath a veil of crushed rubies. Hieroglyphs inked onto the wrappings of nearby mummies shimmer in kind…

This dungeon chamber contains three encounter elements: the murals, the mummies, and the sun orb.

The Murals: Four murals—two on either side of the tomb—are set into 4-ft.- by-8-ft. niches. All four depict the same pharaoh holding a sun between his hands, casting rays onto smaller figures surrounding a pyramid at his feet. A perceptive dungeoneer may note a third eye painted on the pharaoh’s forehead. An insightful dungeoneer notes that only the mummified figures at the pyramid’s base embrace the sun’s rays; the rest appear to writhe in agony.

One mural conceals a secret alcove, which opens if the third eye is pushed inward. It contains a small collection of valuable art objects, including a gold headdress and a jade cat.

The Mummies: Dungeoneers inspecting the sarcophagi note they are hewn from obsidian and filled with treasure—gold coins, scroll tubes, and jewelry. Each mummy wears a headdress, an amulet, and a bracelet made of coiled jade. The wrappings radiate scrying and warding magic.

If either the mummies or the treasures surrounding them are disturbed, they animate and attack the dungeoneers, fighting to the death. The mummies each wield a magic khopesh, and their wrappings have been treated to give them resistance to fire and acid. Their amulets deflect normal missiles.

In addition to their enchanted weapon and rotting slam attacks, each mummy can cast spells as an evil cleric. If a mummy casts a spell while close to the orb, the effect is heightened. Also, once per encounter, a swarm of scarabs issues from each mummy’s eyes and mouth.

The Sun Orb: The orb atop the dais thrums with energy when one or more of the dungeoneers draw close. If examined closely, it radiates powerful scrying and warding magic. The crushed rubies that coat the orb are embroidered into a silk veil that can be brushed aside.

The dais is inscribed with pictographs showing a pharaoh gazing into the sun from atop a pyramid. A dungeoneer who deciphers hieroglyphs through knowledge or magic learns that the great king Ihmrahotep, progenitor of his dynasty, was the first mortal to look on the face of the Sun without perishing, thus earning deific power.

An arc of searing light lashes out and attacks any creature that peers into the orb after removing its ruby veil. Creatures that fail to save against or resist the effect are disintegrated, reduced to a pile of burnt sand.

If a creature gazing into the orb first wraps itself in the glyphic bindings of the mummy guardians, however, it instead receives a beneficial vision they know to be true. The premonition might reveal the location of a powerful artifact or sought-after enemy, or it may bestow a crucial hint that helps the dungeoneers in their current quest.

3 thoughts on “Encounter Codex: The Eye of Ihmrahotep”