Skip to content
Home / Delve into the Depths in the Kobold Blog / Of Godly Might: Clerics of Loki (Part 3) 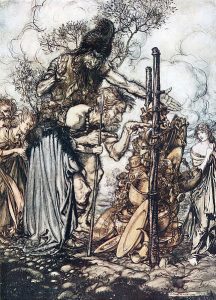 Some oracles specialize in being sneaky.

Deities: Loki, and some deities whose portfolios include the Stealth domain with GM permission.

Class Skills: An oracle with the infiltration mystery adds Climb, Disable Device, Disguise, and Stealth to her list of class skills.

Revelations: An oracle with the infiltration mystery can choose from any of the following revelations.

Cloak of Darkness (Su): (As the dark tapestry mystery [UM] of the same name.) You conjure a cloak of shadowy darkness that grants you a +4 armor bonus and a +2 circumstance bonus on Stealth checks. At 7th level, and every four levels thereafter, these bonuses increase by +2. You can use this cloak for 1 hour per day per oracle level. The duration does not need to be consecutive, but it must be spent in 1-hour increments.

Cut and Run (Su): You gain the bonus feat Run. At 9th level, as a swift action, you can become invisible (as the invisibility spell) with a duration of 1 round, and you can instantly teleport, (with perfect accuracy as though using the spell dimension door), to a location you choose up to 10-ft./level from your original position. After using this ability, you can not take any further actions until your next turn. At 13th and 17th level, you can use this ability one additional time per day.

Darts of Distraction (Su): With a ranged touch attack, you can target a foe within 30-ft. with a dart of distracting energy that makes it difficult for the target to focus on the task at hand. The target suffers a -2 penalty on its Sense Motive and Perception checks when interacting with someone who is using the Bluff, Disguise, or Stealth skills, as well as a -2 penalty on attack rolls. These penalties on skill checks and attack rolls increase by +1 at 7th level, and by +1 again every four levels thereafter, lasting for a number of rounds equal to your Charisma modifier. You can use this ability once per day, and an additional time at 5th level, and every five levels thereafter.

Impromptu Guru (Ex): You are a master of using whatever materials are at hand to get the job done. You do not incur the standard -2 penalty for using improvised thieves’ tools or improvised artisan’s tools. At 3rd level, you have the ability to assemble a disguise kit with various odds and ends you have on your person without having to purchase one. Furthermore, you can assemble this “make-shift” kit with materials weighing half the weight of a standard kit. In the same way, you can create a map maker’s kit at 5th level, a forger’s kit at 7th level, and a symptom kit at 9th level. None of these kits have a limited number of uses, since you are constantly using improvised materials to upkeep them.

Reconnoiter (Su): Your ability to size up an opponent’s weaknesses quickly and effectively means the difference between success or exposure. As a move action, you can study a single creature that you can see, and upon doing so, you add 1/2 your oracle level (round down) as an insight bonus on melee attack rolls and as a bonus on damage rolls against the creature. (The bonus on damage rolls is precision damage, and is not multiplied on a critical hit.) This effect lasts for a number of rounds equal to your Charisma modifier. You can use this ability once per day. At 9th and 17th level, you can use this ability one additional time per day. You must be at least 3rd level to select this revelation.

Recruit Spy (Su): You can call your choice of a raven or a rat to your side, and you can direct it to scout for you as long as you remain within 1 mile of each other. You are able to communicate telepathically with your spy, which will willingly perform as scout to the best of its ability. It’s movement and other statistics are as noted in the Pathfinder Bestiary. As a swift action, you can choose to see through its eyes, in which case, you use your statistics on Perception skill check rolls rather than the creature’s, as well as your type of vision- whether it be normal, low-light, or dark vision. (You do not gain the ability to hear through your spy’s ears.) While using your spy’s eyes in this way, you are left blind until you resume using your own eyes as normal. If you choose not to look through your spy’s eyes, but rather get information communicated directly from it, its responses to your questions will be limited by both its Intelligence and its perspective. You can use this ability once per day with a duration of 1-min./level, plus one additional time per day at 15th level. You must be at least 11th level to select this revelation.

Seasoned Imposter (Ex): You excel at formulating plans on the fly to adjust to changing situations, and your reflexes are highly developed from anticipating trouble at every turn. You gain a +2 bonus on Initiative checks, as well as Reflex saves. These bonuses increase by +2 at 9th and 17th level.

Up and In (Ex and Su): You gain the rogue talent wall scramble (UC). At 7th level, you gain the vigilante talent rooftop infiltrator (UI). At 11th level, you gain the ability to walk on walls as the spell spider climb for 10 minutes per day per level. These minutes do not need to be consecutive, but they must be spent in 10-minute intervals. You must be at least 3rd level to select this revelation.

Final Revelation: You are a master of subtlety, able to gain entrance into any structure and any organization. At 20th level, you can cast the spells knock and burrow (UM), in any combination, as spell-like abilities, a total number of times per day equal to your Charisma modifier. As a spell-like ability, once per day, you can cast the spell adjustable polymorph (ACG) with a duration of 1-hour per point of your Charisma modifier. Additionally, once a day, you can exactly mimic a spell or spell-like ability that you just observed being used by a foe, instantly casting the spell yourself with an immediate action. You do not need the required material components of the spell to use this supernatural ability, and you can mimic any spell or spell-like ability regardless of whether it is arcane or divine.