Skip to content
Home / Delve into the Depths in the Kobold Blog / Your Whispering Homunculus: All Smiles, Part One 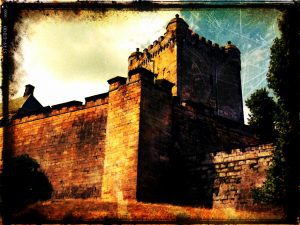 All Smiles, Part One

“He’s still out there master.”
“Good.”
“But master, your great uncle Flobb is turning blue.”
“Let him. I never liked the man.”
“But master, it is the season of goodwill. Surely, you have some kindness in your bones at this, the happiest time of the year.”
“Nope.”

At least in general.

Not everyone shares those good wishes, however, and a false smile may hide many things. This time of year is an occasion to bring family and friends together, but in a dangerous place like a fantasy campaign, these events may be a mask for darker events.

This Christmas edition of the Homunculus explores those aspects in adventuring—the moot, the gift, the visitor—that this season in particular suggests. It proposes ways to use them to create great atmospheres for your games. The events and suggestions below fit in with this time of year perfectly but may be of use at any time. Throwing a totally unexpected event by the way of your players creates an immediate suspicion—can all really be as it seems? Are our enemies reaching out to become friends, or do they have ulterior motives…

All these situations come with a proviso that they will work for some and not for others, and that’s not just some players but also some characters. Many very religious or strict PCs come with beliefs that absolutely forbid interaction with the enemy; this article is not for them, it is for those who enjoy a greyer line, those who smile and then slay, those who can see that the enemy of my enemy may also be—at least temporarily—my friend.

The Friend and Foe Feast

The forced feast backdrop works only if the opportunity to openly fight is removed on pain of some terrible fate. It could be that the PCs’ overlord demands all the groups attend the same meeting for a purpose or that some event draws them together.

At the beginning of (ahem) “Sorrow,” an adventure within Midgard Tales, the PCs attend a wedding between the king’s beautiful daughter and a vile and very feral fey. The setup is that the PCs are guests and expected to behave along with everyone else despite the horrific and bestial nuptials before them. This backdrop—visiting PCs within the household of a friendly ally or potential employer—enables the GM to keep order despite the revolting nature of what is occurring. It offers one way to tackle this set up.

The threat of some terrible penalty for defying the forced truce must be real, however, but not necessarily physical: the removal of favors, fines, and loss of face all work far better than an actual physical threat, but go with whatever set up you think your players will enjoy. You could even go for the carrot rather than the stick by using the well known “they are your enemy, but we need something from them” setup.

The real joy in these situations is having friend and foe together without the option of combat, so other skills and good old roleplaying comes into the foreground. Here, combat is more about wit and repartee and, perhaps, an option to humiliate ones’ foe tastes even sweeter than a combat—stealing away a treasure, a land, or a love from right under their noses can be savored and, of course, used to establish a hatred that runs even deeper due to the enforced familiarity.

This intrigue works best if it draws the PCs in using the setup of respect or of potential future alliances—or in other words, when the players actually want their characters to take part rather than forcing them. There are other ways to pull off this uncomfortable meeting. One example is tradition where the host of the event must not allow blood to be spilt beneath his roof. There is also religion, where the observance of a holy festival or rite during which no blood can be spilt must, of course, be observed by all parties. There also rests the potential of some respected or holy meeting place or holy ground where such gatherings can occur, but step away from those bounds, and the usual rules apply. Let your imagination run free when it comes to reasons, but try to avoid the fallback option of force as it does, if you’ll pardon the pun, feel forced.

If, like me, you’re a fan of Game of Thrones, think on that amazing Red Wedding and how horrific are the events that unfold, running contrary to all honor. What great stories blossom from that one terrible act. Take that tale, and run with it as another more crooked option to this situation, and use it as a double bluff, have half a dozen such events run smoothly across your campaign and then turn the tables with a final, campaign-climaxing betrayal.

Some of the best adventures I can remember playing were run by referees not afraid to bring friend and foe into intimate contact, churn them up, and see what comes out. Almost always a fun and memorable session.

In the next part of this article, we’ll look at another pair of seasonal occurrences—gifts and unexpected visitors…

2 thoughts on “Your Whispering Homunculus: All Smiles, Part One”