Skip to content
Home / Delve into the Depths in the Kobold Blog / Welcome to Midgard: Rava (Ariadne) 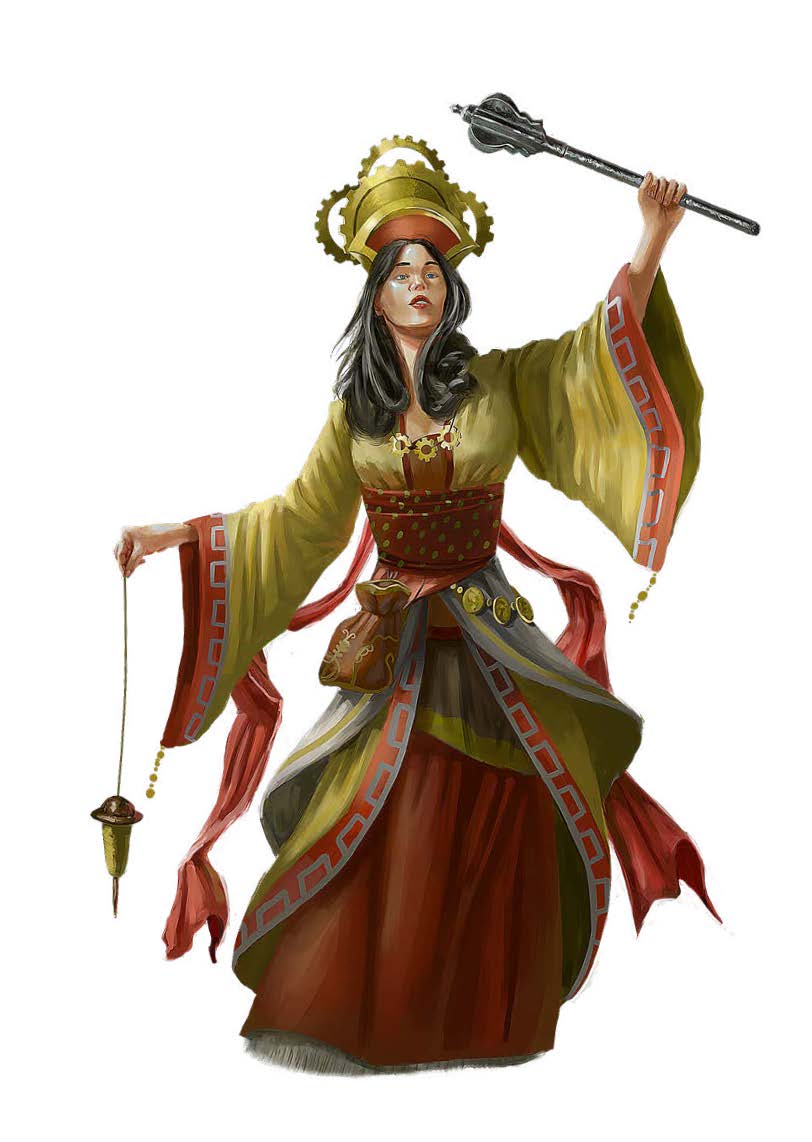 The Gear Goddess, the Clockwork Oracle, Mother of Industry, Spinner of Fate, Merchant Goddess, Patron of the City of Zobeck, Patron of Weavers and the Gearforged.

Favored Weapon: Dagger, scimitar Patron of Zobeck, Rava is a relatively minor goddess whose beneficence has given the city autoscribes, clockwork scullions, the gearforged, and other inventions. Merchants believe she blesses their hard work, and her mark features on contracts and bills of lading as a surety of delivery or payment. She is the patron goddess of the city and a sponsor of magic, knowledge, and industry.

Rava’s physical form resembles a six-armed woman, and she is frequently shown weaving or spinning. She appears as a maiden, as the mother of industry, and as a wise crone in different shrines and at different seasons.

The industrious, the learned, and the gearforged are Rava’s closest followers, and dwarves, humans, and kobolds all maintain shrines to her. Most of her hard-working followers are willing to try new things; novelty and invention are a part of her portfolio as much as tradition and crafting. Alchemists, wizards, scribes, guild masters, weavers, and merchants all turn to Rava for wise counsel.

Rava’s priestesses have written dozens of volumes of prophecy at the Clockwork Oracle in Zobeck, and keep a dozen more of the sacred works of Ariadne on the southern islands. These books are closely guarded; most of their predictions do come true in time. The priesthood sells the knowledge within them to their wealthiest followers and gives it away to the most fervent and boldest followers, the paladins and inquisitors of the faith. These are most often gearforged heroes.

Rava’s symbols are the gear and the spider. Many of her priestesses carry a spindle for thread and spin as often as possible, the better to feed the looms of Rava’s weaving spiders. Her priests build looms in her shrines and work as scribes for all who need thoughts put to paper (for a modest donation).

Lena Ravovik is the current human high priestess of Rava. Her surname is traditional for human priests and priestesses of Rava in the Crossroads, who abandon their families and former lives when they enter the service of the goddess. Other prominent clerics include the current dwarven high priest in Zobeck, Ondli Firedrake, and Alkestis, the high priestess on the island of Archae.

The most famous of her clergy are the goddess‑forged. These powerful clerics have been blessed to become immortal, magical machines. Their bodies become completely covered in metal, and they gain the construct type and other abilities as a gearforged. (See MHH and MPG for details of this race.)

Rava is not fond of Bastet’s sybaritic luxuries and even less fond of the wild madness of Addrikah, the derro mother of madness and chaos, whose works are abominations. Rava is considered cool or hostile to the followers of Yarila and Porevit, and she has a longstanding-but-genial feud with Volund over whose artifice and creation skills are greater.

Rava is called Ariadne in some southern realms, and she is a great patron of weavers, jewelers, and scribes. In the North, she is associated with the Norns. A few believe she is a female mask of Thoth-Hermes, Kwanzi, or Sothis‑Shai.

Rava demands her followers be wise and hard-working. They prize learning and scholarship, and the discovery and making of new things. As a goddess of both novelty and fate, she demands her followers seek out new learning and steer the world’s fate to peace and plenty. In Zobeck, Rava’s followers must defend her patron city against any threat that the Clockwork Oracle identifies. Rava despises sloth, idleness, and luxury…