Skip to content
Home / Delve into the Depths in the Kobold Blog / Friday Funny: A Coward’s Life (Part 2) 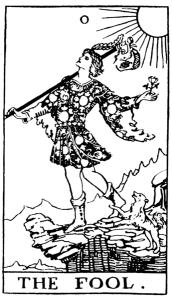 Cowardice has a devastating effect not only on a character’s personal reputation but, also, on group morale. Successfully using a cowardly feat or skill imposes a -2 circumstance penalty to all Intimidate, Bluff, and Diplomacy checks made by you and your allies against any enemy who witnessed your cowardly action. The enemy, on the other hand, enjoys a +1 bonus to initiative rolls and saves against fear effects.

These penalties are stackable, for every incident of cowardice continues to shake your allies’ confidence while emboldening the enemy.

For this reason, experienced cowards have developed entire strategies to mask their craven deeds as cunning strategy. Nevertheless, a single failure is enough to brand one a coward, a reputation which is extremely difficult to shake off and may have adverse affects on most social actions, such as finding patrons, enlisting cohorts and followers, and being accepted to certain honor-based societies…

A skilled coward is a breathing coward, so practice , practice, practice:

Sometimes the best way to convince enemies not to kill you is to make them believe you’re already dead. However, successfully pulling off such a trick requires significant expertise in the arts of deceiving and acting.

Check This skill has two uses, playing dead and pretending a non-fatal wound was fatal.

◊ Playing dead—You can lie down very still, stop your breath, smear blood all over yourself, and so forth to appear dead to the casual observer. This is a standard Bluff check opposed by your opponent’s Heal with the following modifiers:

◊ Pretending to be mortally wounded—In order to pretend a non-fatal wound has killed you, you must succeed on a Bluff check opposed by your opponent’s Heal. For every 10 hp you have lost so far, you gain a +1 circumstance bonus to your Bluff check.

Action Varies. Playing dead can take anything from one round (just lying on the ground very still) to hours (preparing the perfect disguise). Pretending to be mortally wounded is always a free action.

Try Again Varies. Once opponents have seen through your disguise, it is next to impossible to convince them that you’re dead. However, you can continue to pretend you are mortally wounded every time you are hit until you are actually killed.

Synergy If you have 5 or more ranks in Disguise, you get a +2 bonus on Bluff (play dead) checks.

Special The use of this skill doesn’t necessarily count as a cowardly action. It is up for the GM to decide when faking your own death stems from fear and when it is a cunning ruse.

By artistically running across the battlefield, making broad but pointless swipes and loudly exclaiming your hatred to the enemy, you can mask your cowardly self-preservation as a noble and selfless sacrifice (possibly with the aid of later-added, self-inflicted scars). After the battle, you weave extraordinary tell-tale stories, portraying your unhelpful-at-best actions as the acts of heroism that saved the day.

Check You can cancel the harmful effects of using a cowardly feat, by making a successful Perform (fake bravado) check opposed by the viewer’s Sense Motive. The check modifiers to your Perform roll are as follows:

Action Varies. Always done in conjunction with another action.

Try Again No. Once everyone saw you for the coward you are, there’s no going back.

Synergy If you have 5 or more rank in Bluff, you get a +2 bonus on Perform (fake bravado) checks.

Traditional diplomacy assumes two equal parties each with its own set of demands trying to reach a mutually acceptable compromise. Some situations, however, call for crying pitifully and groveling in the dirt while kissing your enemies’ boots as they kick you in the face. Those who master this skill often succeed where experienced negotiators fail.

Check: For a coward, the main use of the Diplomacy skill is to beg for your life once all other options, such as running away or hiding among the corpses, have failed. This can take two forms; surrendering and pleading for your life:

◊ Begging—Sometimes, you’re in no position to haggle; all your friends are dead or dying, being finished off one by one by the victorious orcs, and you’re on your hands and knees coughing blood and teeth into the mud. In that case, the honorable thing to do would be to pull yourself together and launch yourself at the enemies, hoping to sell your life as dearly as possible. The sensible thing to do, however, is to degrade yourself further, offering to be the orcs’ submissive plaything and looking so pathetic that even an orc warrior will feel bad for killing you. This check is done the same way as a normal attempt to influence an NPC’s attitude, except that the below modifiers can be applied. Note that whenever you attempt to deceive your opponents, you must first succeed on a Bluff check before enjoying the relevant modifier:

◊ Surrender—Surrender is a form of negotiation in which a side that wasn’t yet completely defeated is trying to convince the enemy to grant them safe passage or humane incarceration in return for some kind of concession, such as forsaking one’s political goals, paying ransom, or even switching sides. This is done in the form of opposed Diplomacy checks modified by how badly the surrendering side is outnumbered/wounded and how much it is willing to yield. Because of the complexity of these circumstances, no table is offered and instead GM discretion is advised.

Action Varies. Surrendering can take days or minutes, depending on the situation’s complexity. Begging for your life is usually a single free action, usually a desperate plea for mercy.

Try Again No. Both failed negotiations for surrender and pleading for your life result in renewal of hostilities. In the latter case, this is almost always results in immediate death.

Although Uri knows the importance of not being seen, you can still catch him at www.twitter.com/urigrey.

Rounding out he week, Uri regales us with the conclusion to his “A Coward’s Life.” And how does this relate to It’s a Trap! Week? Turns out the turkeys used their tofurky cousins as decoys. While we slept the day away with full tummies, the turkeys sprung their trap. Now, you get to put your new found *ahem* tactical feats and skills to the test.

All hail our turkey overlords.