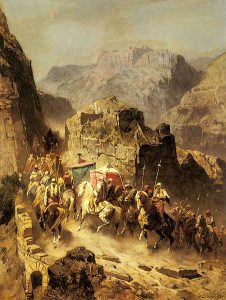 The shipment is supposed to be food for the prince’s wedding. The route is supposed to be one of the safest traveled by the merchant caravans. The wagons, well defended as they are, are thought to be at little risk.

Yet you have been summoned to investigate rumors of a planned ambush.

“Stop that ambush,” says the king’s armorer. “You will be well compensated. More so if you can capture the leader of these brigands.” Why this man has an interest in this caravan is a complete mystery.

The High Ground, or the Higher Ground

A good way to run this skill challenge is to allow the players to make their own rolls, but don’t let them know if they are successful. If they roll very high or very low, their confidence will increase or decrease, but they never know for sure what their standing is. When a source of information dries up or gets more difficult, let them know, but don’t tell them when they’ve tipped off the enemy.

You have 3 days to gather all of the information you need. During these 3 days, you may attempt the following checks:

Streetwise (Moderate DC the first time, +4 to the DC each subsequent attempt): You work the seedier elements in town, probing discreetly for information about this caravan and the ambush. At the GM’s discretion, gold can make this an easier check, but too much gold might draw unwanted attention.

Success—Discretion is the key. You gain one piece of information without drawing any suspicion.

Failure—You still gain the information, but the enemy is one step closer to knowing that you’re on to them.

Insight or Perception (Moderate DC, +4 to the DC for each failure already accrued in this skill challenge): Crowds move about the city, most of them innocent, most of them unaware. A few of them have the information you need. You only need to pick them out of the crowd.

Success—A suspicious traveler is watching a little-used alley, a thug is overheard discussing an upcoming job, or an unemployed miner gambles just a little too freely for someone with no source of income. Whatever the case, you have found someone whom you are certain is somehow involved in something big, something illegal, something that will happen soon.

Failure—You just seem to be in the wrong place at the wrong time. This does not count against the total failures allowed for this skill challenge, but you do waste 1 day.

Intimidate (Hard DC, only available if a successful Insight or Perception has been rolled): A little force might just get someone talking.

Success—He fears you, and he talks. He’s so scared he’s not going to tell anyone what happened, and you get a little more of the information you need.

Failure—He talks, but he also looks to sell you out the minute you are out of sight.

Bluff (Hard DC, only available if a successful Insight or Perception has been rolled): Think of a good lie, you might just be able to trick this information out of someone.

Success—He buys it. He not only gives you the information, but he’s not even suspicious enough to tell anyone about it.

Failure—He initially believes your lie but, later, he begins to doubt. He mentions it to someone else, possibly tipping them off.

Stealth (Hard DC, only available if a successful Insight or Perception has been rolled): Sometimes following someone home is the best way to find out where they live.

Success—You follow him to what must be the ambush site, where he and a couple others set up some traps. While they work, you overhear them talking about the plan.

Failure—You follow him, and he meets with an accomplice at the ambush site. You overhear them talking and get one more piece of information, but when they leave, they double back to get a good look at those following them.

Thievery (Hard DC, only available after a successful Stealth check): You saw them set the trap, now it’s time to disable or move it. It is a simple snare trap, designed to immobilize anyone who triggers it.

Success—You disable the trap and move it to another location.

Failure—You can disable the trap by triggering it, but the trap is broken in the process. This does not count against the total failures allowed for this skill challenge.

As a matter of policy, accept any attempts at creativity. If a player thinks of a different way to get information, go ahead and give it a hard DC and let them go for it. If they decide to spend money on a divination ritual, go ahead and give them a free success, so long as they ask the right questions.

Each success in Streetwise, Intimidate, Bluff, or Stealth yields one piece of information. As successes roll in, pick an item from the list and work it into the results of that success.

If fewer than three failures have been accrued during this challenge, all of the information gained is good. If the enemy is tipped off, however, much of it will be turned against the characters. The location of the ambush remains the same, but origin points for all of the brigands changes. Many archers will stand on even higher ground to better fight those characters on the tenement adjacent to the Goldlager. The door of the Goldlager will be rigged to be easily destroyed from the inside. Darius Rax and the undercover brigand will change their locations and markings, even going so far as to give an innocent guard the blue cloth.

When all is done, the skill challenge determines who gets the advantage of foreknowledge. The information gained or lost should have a significant effect on the difficulty of the encounter.