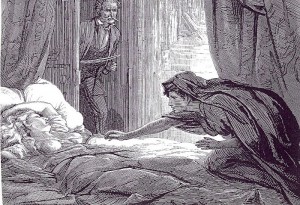 Dusting the dirt and maggots from its skin, the corpse rises from the grave longing for the sweet kiss of a soul mate.

If left alone with the comatose victim, the strigoi hastens to feast upon the brain. It dislocates its jaw and bites through the skull, working its way around the skull to gain easy access to the grey matter (not much different from a can opener). The strigoi then gorges itself until the brain is completely consumed. By eating the brain, the strigoi satiates its hunger for 7 days. After that time, the strigoi seeks a new victim…

While feeding, the strigoi is vulnerable to attack and to true death. While it feeds, it is considered flat-footed. As a result, most strigoi only attack victims who are alone. Since it is a solitary creature, a strigoi never attacks a large party, especially one it cannot overpower. The strigoi’s favorite victim is one that is sleeping and weak, such as children.

On a sleeping victim, a strigoi uses its psychic power to cause nightmares. As the victim struggles in the throes of the dark vision, the strigoi begins to suck the energy from the victim. The victim is entitled to a Will Save (DC 21) each round to wake. Each round the DC increase by 1.

There are many theories to how someone becomes a strigoi. The most common suggest that a person filled with pain or regret turns into a strigoi. For some, dying before marriage is one of the greatest regrets of their lives, so many believe the unwed rise as strigoi. To prevent this, some villages hold weddings between such a corpse and a town virgin. The virgin is usually selected by lottery. Unfortunately for the virgin, this marriage usually necessitates being buried alive with her betrothed.

Other indicators that someone may rise as a Strigoi are babies born with a caul (or extra membranous layer on the head), a child with a tail, failing to baptize a child before 7 days have elapsed, or being the 7th child of the same sex in a family.

A strigoi is not dead once reduced to 0 hp. In order to give the strigoi permanent rest, one of a few methods must be employed. The most popular method is to stake it through the heart followed by decapitation. The stake should be made from wild rosebush or aspen although a sickle blessed by a priest also does the trick.

There is, however, a unique challenge. Unlike normal vampires, strigoi have two hearts and only one pumps lifeblood. In order to kill a strigoi, the correct heart must be staked; impaling the wrong heart could be fatal for PCs. If the correct heart targeted, blood explodes forth from the chest like a geyser.

One method to decrease the chance of failure is to stake the corpse through the heart, through the body, and into the ground. That way, if the wrong heart is staked, the creature is still immobilized. This method is usually followed by setting the strigoi on fire. Anchoring the strigoi at a crossroads is best, yet.