Skip to content
Home / Delve into the Depths in the Kobold Blog / Welcome to Midgard: Crossroads Mercenary Companies 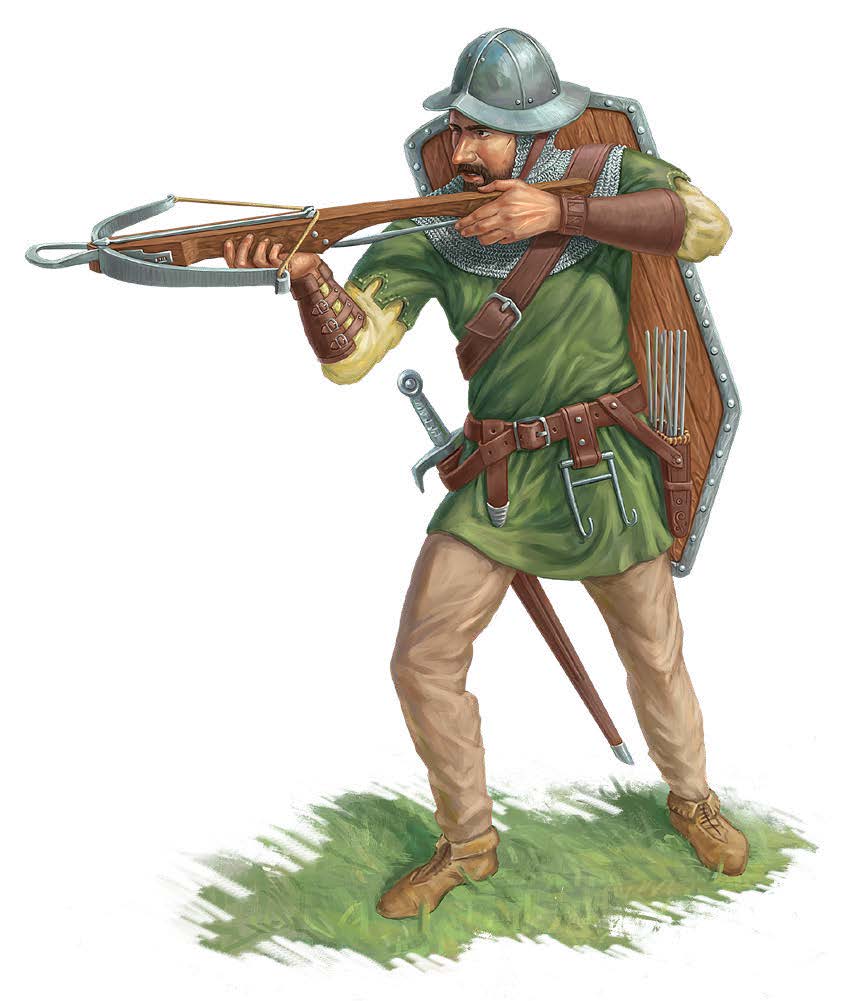 Mercenary life seems full of plunder and easy money when the recruiters come around. Most of the time, it involves a great deal of boot leather and a life spent in tents and camps. The lucky recruits do get paid, find rich plunder, and retire to a manor house filled with sweet scents, rich tapestries, and obedient servants to erase memories of slaughter, death, and burnt-out villages. Most mercenaries are not that lucky.

Argent Rats: Originally bandits who plagued the northeast of the Magdar Kingdom, the Rats have tried to legitimize themselves under new leadership. At first a group comprised fully of kobolds, they operated along the Argent River and disrupted trade. Now their ranks are filled with ratfolk, dust goblins, and other races; they favor short folk, since their specialty is stealth and getting into places others cannot. To their credit, they even have a number of halfling members, though others mistake them for young humans. The Rats are oddly distrustful of gnomes and will not allow them into their ranks, giving no more reason than a bad deal in the past.

Black Brotherhood: Composed of disciplined soldiers from throughout Midgard, the Brotherhood’s diverse ranks are bound in together by their faith in Mavros, god of war. For this massive mercenary army, war transcends nationalistic affiliations and even business interests. Blazing the trail of war is a warrior’s lifelong pilgrimage. Every battlefield is a living holy site emerging from moments both grim and great.

Veteran campaigner Captain Laurius Nuno (N male human fighter 13) heads the company pavilion, which can be found at a different Crossroads location every season. The pavilion sets up near a city expecting conflict, thus offering abundant employment opportunities—Nuno’s most recent service was against the Mharoti. Though the captain might arrange meetings between company captains and prospective employers, he seldom intervenes in the employment of individual units. Separate war companies have even ended up facing one another on opposing sides of a conflict. Such is the way of war.

Hogar’s Horribles: An accomplished eldritch warrior, Harmund Hogar (NE male tiefling wizard 11) would have been a natural successor for his Dornig father’s mercenary company and minor estate. His relatives did not view the half-breed Harmund as worthy of the honor. Maneuvering swiftly after the elder Hogar’s passing, they capitalized on ancient but active laws to seize the Hogar holdings.

Ostracized by his blood relatives, Harmund embraced his heritage and found kin of his own choosing in fellow half-breeds, forming a mercenary company working out of the Crossroads. Willing to tackle the most dangerous jobs with their strange talents and abilities, this small group of mostly half-bloods includes elfmarked, hellbred, demonmarked, and even dragonkin. Harmund dubbed his motley band “the Horribles” only once in jest, but the name stuck. They don’t make it a point to live up the moniker, at least not often. Hrothgar’s Marauders: This band of competent yet somewhat feral gnoll mercenaries from the Rothenian Plain are led by Hrothgar Torn-Ear, a savage warrior with a penchant for wearing the teeth of his enemies in his trophy necklace. The Marauders are superb rangers and scouts, highly skilled with bows, and excel as lightly armored skirmishers. Hrothgar keeps his troops in line as he searches for those who wiped out his pack on the steppes in between jobs.

Hrothgar doesn’t realize that a demon possessed him one night and he massacred everyone in his camp before collapsing into unconsciousness. The demon lays dormant deep inside his head, but it will return if the gnoll ever discovers the truth.

Huginn and Muninn’s Company: This company of Northlanders sells its services for gold and steel, always with an oath to Wotan (because all its members are fervent followers of that god). Huginn and Muninn are Wotan’s ravens, and two birds fly on the company’s banner. This small army has at least three strongholds in the North, and three times that number in outposts, which are both lucky numbers for the Northlanders.

Almut Shield-Breaker leads the company, and his troops reverently refer to him as Wotan’s Son. Almut is a berserker who believes that the ravens must be fed on a regular basis, and he resorts to banditry and pillage to honor them if peace lasts for too long.

The Raven’s Sons: A small company of about 50 humans, ravenfolk, and centaurs, these soldiers have fought for the Despot of Reth-Saal, the Master of Demon Mountain, the Tsar of Vidim, and once for Lucan, the king of the Greater Duchy of Morgau. They are cynical and cruel, fiercely loyal within their fraternity and mocking of all others. Their commander is Festering Ferdzik, a male darakhul born in Krakova. Company legend says he abandoned the Ghoul Imperium for a life on the surface.

Most other mercenary companies consider the Raven’s Sons to be dangerous predators and plunderers who cannot be trusted. Rumors of cannibalism in its ranks are not uncommon.

Skadi’s Sons: This small group of rangers specializes in alpine or winter warfare. They are either excellent climber or skiers (often both), and all are assuredly lethal archers. A few barbarians, some fighters, and a handful of assassins, rogues, and casters complete their ranks. The company numbers no more than 200 members, including approximately two dozen women.

These ladies were formerly called Skadi’s Daughters but are now collectively referred to as Skadi’s Sisters, having proven on many occasions to be wilder than their male counterparts. The most notorious deeds of this company include the assassination of Brandur the Snow Skald in his mountain retreat, and the slaying of a curious creature called the Stag Lindworm near Wolfheim. Their current commander is Wulfnoth Blue-Beard (CG male human ranger 12), but the women have their own leader, Mist (CN female human rogue 5).

The Thunderbolts: A crossbow company led by a charismatic priestess of Perun named Thalia Regenbock, the Thunderbolts excel because they train daily and follow orders (a trait rarer than might be expected among mercenary companies). They number from 40 to 100, depending on the season, with a core of Septime and Dornig sergeants and veterans. The Thunderbolts operate well in storms, fog, or rain, since their best scout, Monfried Aldous-Donner, is an elfmarked arcane archer who can see though foul weather.

Thalia claims to be the dispossessed heir of a minor house of Dornig, though she lacks the manners of a noble and curses like a muleskinner. Her simple goal of raising enough cash to retake her manor house was abandoned once she realized that Perun favored her leadership, and she has a knack for negotiating good pay with Magdar and Zobeckers alike. She hates the Mharoti and has earned grudging respect from some cantonal dwarves.

Trollhaugen Pikes: Originally formed to fight the trolls of Trollhaugen, these warriors now find employment as a private army or as housecarls to a particular noble. As their name implies, Trollhaugen Pikes are well versed in the use of pikes. However, they typically use polearms only when facing larger opponents (like trolls) where reach is important. Where polearms would be unwieldy, opponents quickly find that Trollhaugen Pikes are equally expert with halberds, swords, and other weapons.

Their rigid training and discipline allows Trollhaugen Pikes to ignore taunts and baiting. However, in combat they fight aggressively, preferring attack over defense. They do not use shields, favoring two-handed weapons or multiweapon fighting. Not surprisingly, their leader is Meshko Stubblehide (N male trollkin barbarian 7), who hates trolls and giants with particular vehemence…