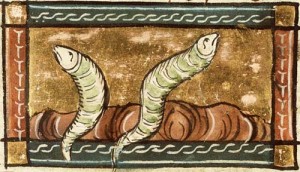 Countless strange and terrifying creatures lurk in the subterranean world that sprawls beneath the mortal empires. Through lightless tunnels, caves, and dungeons they burrow, most driven only by a primal desire to hunt, to mate, and to nest.

Many of these creatures, however, are warped by the feral magic of the underworld, their already monstrous forms transmogrified into aberrant beasts unlike anything produced by the hand of nature. The two-headed rustmaw displacer purple worm is one such example, a tireless engine of devouring that blends aspects of the purple worm, the displacer beast, and the rust monster. Numerous bands of dungeoneers have been ambushed by these brutes, the encounters forcing delvers to return to the surface unarmed and nearly nude.

The ground heaves upward, and out from beneath the broken stone rises a colossal two-headed worm with dull violet scales and hissing mouths wet with saliva. Its coiled body—as long as a caravan of wagons—seems to judder from one position to the next, a trail of afterimages tracing its movement.

Natural 11-15: The purple worm may make a swallow whole attack against the target as a free action.

[Special Trigger] Swallow whole +11 vs. PD – The target is swallowed whole. A swallowed creature takes 30 acid damage at the start of its turn and is stuck, hampered, and unable to attack or affect anything outside the purple worm’s gizzard. There are two ways out.

Cut your way out: The target can deal 20 damage to the purple worm with a single attack and cut its way out. Only edged or bladed weapons can damage the purple worm from within. A muscle reflex seals the wound after the target escapes.

Get upchucked: While the purple worm is staggered, the target may use a standard action to try and crawl out of its maw. The target rolls a hard save (16+); on a success, the worm vomits the target out somewhere nearby. The worm also vomits out all creatures it has swallowed when it drops to 0 hit points.

Displacement: When an attack targets the purple worm, the attacker must roll a natural even number on the attack roll, or else the attack misses. This ability does not function while the purple worm is confused, dazed, hampered, or stunned.

The two-headed rustmaw displacer purple worm is driven largely by territorialism and instinct. As such, it doesn’t have the capacity to cooperate with other creatures in any meaningful way. However, it has been known to tolerate troglodytes and otyughs that live or hunt in their domain.

Rumors circulate of a clan of dark elves that use two-headed rustmaw displacer purple worms as mounts.

When the two-headed rustmaw displacer purple worm is slain, the PCs may claim the following rewards in addition to any treasure they would normally earn.

Sersa Victory is the founder of SVD Press (http://svdpress.com), a small group that publishes deathtrap dungeons for Dungeon World and 13th Age. Among other titles and curses, Sersa was named Apprentice of Acererak by Chris Perkins and Monarch of the Monsters by Kobold Press readers. His adventures, including Revenge of the Iron Lich and Fane of the Heresiarch, laid the foundation for the genre that would be known as fourthcore.