Skip to content
Home / Delve into the Depths in the Kobold Blog / The Mad King Plots Against Ye! 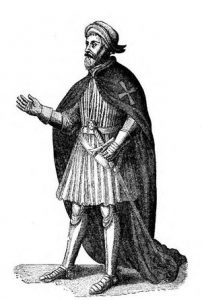 Lord Gundark: “You must battle the dragon and rescue my daughter. I will give you one thousand gold!”

Lance the Warrior: “No thanks, Lord Gundark, we have plenty of gold. We’ll be taking a pass…”

Gundark: “Wait, come back! I might have a quest for a prince held by an aboleth around here somewhere…”

Nobility are often the quest generators of campaigns, doling out simple jobs and cash with both hands. For the experienced player, this can become trite and repetitive. What if you could add an additional layer of subterfuge for the players to confront? A simple plot twist can put a new spin on an old fantasy trope. Then, instead of being a forgettable dungeon crawl with the prerequisite number of initiative and attack rolls, it becomes a battle of wits with a foe from an unexpected quarter. It becomes an adventure that the players will remember and talk about for years to come.

Here are a few examples to get you started:

1. The king sends you out to vanquish the evil temple, but he is hoping that you will release the archdemon imprisoned there by an order of lawful monks.

2. The baron sends to you to fight the dragon and rescue his daughter, but she is a tiefling rogue and the gold dragon caught her filching from his hoard.

3. The “fixer” for the local ruler who hired you at the tavern is actually a common rogue. He wants you to clear out the dungeon for him so that he can sneak in and steal the giant ruby from the demon statue’s eye. All while you are battling the boss villain.

4. The elf princess that comes to you in your dreams begging you for rescue is actually a half-orc sorceress that uses dream spells to lure unwitting adventurers to their doom.

5. The innocent-looking gnome leaders who ask you to save their village from a wicked witch are actually demon-worshipers, and the witch is Baba Yaga.

6. Dwarf miners ask you to save them from attacking orcs. Or so they say. It turns out that they are bandits who have stolen sacred treasures from a reclusive orc tribe.

7. The outcast princess seeking to regain her rightful throne from evil usurpers is nothing of the sort. Instead, she is a deposed tyrant who needs muscle to reconquer her kingdom across the Great Sea.

8. A loyal noble or knight seeks help to prove that the queen is being unfaithful to the king. The deceiver’s true intention? He wants to use the party to manufacture evidence against the innocent queen.

9. The voluptuous duchess seduces the party’s doughty fighter, and then she claims that her cruel spouse is returning from a foreign crusade. She wishes the party to ambush and kill her husband, who is a paladin who trusts and loves the duchess dearly.

10. A grateful king asks you one more favor: Take back the keep lost to a foreign rival. His deception? The keep was never his. The attack this king wants is an invasion of sovereign territory.

About the Author
Adam Roy is the alter ego of Mighty Mongo, half-orc barbarian blogger and founder of the Humanoid Anti-Defamation League (‘Tuskers Unite!’). He is a freelance writer and editor for Open Design (Kobold Minion #13), Game Master-at-large-without-portfolio, as well as a full-time father, husband, and wireless guru in his offline life. He manages all this by avoiding sleep altogether.

3 thoughts on “The Mad King Plots Against Ye!”