Skip to content
Home / Delve into the Depths in the Kobold Blog / Gun Upgrades: More Bang for Your Buck! 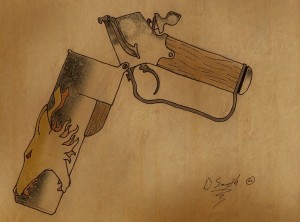 Whether you love them or hate them, guns are becoming more and more common in fantasy games. If you look closely, though, you’ll see that the guns currently available for the Pathfinder roleplaying game have a strangely large technological gap between them. That is to say, the step between early firearms and modern firearms is huge, and as such, it makes many GMs balk at the idea of allowing modern firearms into their game. The following weapon qualities have been envisioned to bridge the gap a little by allowing for a gradual increase in the power of a character using firearms.

You cannot add breech-loading to a firearm after it’s created; it must be crafted as a weapon of that type.

The rifling on this weapon is of extremely high quality, allowing for superior accuracy over greater distances. This increases the maximum number of range increments of the firearm to ten (instead of five for most firearms) and allows the wielder to target touch AC in the first two increments instead of just the first. Superior rifling costs 2,000 gp for a one-handed firearm and 5,000 gp for a two-handed firearm per barrel. Superior rifling has no effect on firearms with scatter quality.

The rifling of an existing weapon can be upgraded to superior rifling by a skilled gunsmith (a character of at least 6th level with the Gunsmithing feat).

(Astute readers will notice a lack of a cost increase to the ammunition. This is to allow for focus on play rather than on accounting. GMs who wish for a greater level of verisimilitude in their games should increase the cost of the black powder by +1 gp per +1 Strength bonus of the weapon.)

You cannot add high calibre to a firearm after it’s created; it must be crafted as a weapon of that type.

2 thoughts on “Gun Upgrades: More Bang for Your Buck!”