Skip to content
Home / Delve into the Depths in the Kobold Blog / Heroes of Nuria Natal: The Way of the Southlands 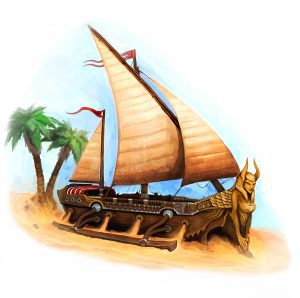 The Way of Nuria Natal

Oh, the lands of Nuria Natal! Today, you bring us fantastic miscellany from the south.

The asp, or scorpion dagger, appears to be a simple thrusting blade, but its handle holds a secret compartment for poison. When the blade strikes it depresses into the hilt, allowing the poison contained therein to flow down a channel in the blade and into the victim. The intricacies of the mechanism mean that it is not balanced for throwing but make it a popular choice for assassination.

The throwing stick has been in use since ancient times in Nuria Natal. Originally used for hunting water fowl, it became a cheap ranged weapon for infantry. Many warriors feel an almost sacred significance in the weapon and may carry one even if they do not use it.

Consisting of wide axe blade mounted forward, rather than to the side as with most axes, on a long pole the fan axe was likely originally only used for ceremonial purposes. However, it has become a popular weapon among gladiators and in other places where combat is as much entertainment as conflict. A two-headed version is also available for twice the cost.

A khopesh is a curved, thick blade that measures about two feet long, heavier than the scimitar. The point on the end allows it to be used as a thrusting weapon, doing piercing rather than the normal slashing. Special: The hooked blade of the khopesh is used to snatch weapons and shields from an opponent. A fighter using a khopesh has advantage when attempting the Disarming Attack maneuver. 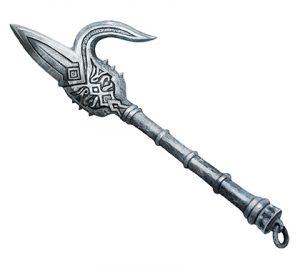 A nurian hook is a one-foot-square shaft that ends in a bronze hook with an arrow‑shaped point at the pommel. Embalmers and butchers use it to hang up corpses. Special: Fighters using the Trip Attack have advantage when using a nurian Hook.

Gaming Set (Senet): There are many versions of this popular board game as it is played by all levels of Nuria Natal society. The basic game consists of board with three rows of ten squares, between 3 and 10 pawns per player, and a set of dice. Pawns move around the board in an “S” shape, with each player trying to get his or her pawns to the end first. Some boards have special squares that have additional meanings such as causing a pawn to stop its progress, to remain until a certain number is rolled, or to return to the start.

Simple wooden versions of the set cost 1sp while those made of finer materials or with more elaborate boards can go for 10 gp and more.

Sandship: A favorite among desert travelers in Nuria Natal, the sandship is equipped with skate-like pontoons that allow it to sail across the sand and silt as easily as over water. Due to the differences in handling, those proficient with a water sailing vessel may apply only half of their proficiency bonus to checks made to control a sandship. These vessels come in a wide variety of sizes and shapes. To determine the cost of the vessel find an equivalent waterborne vehicle and add +25% of the base cost. Speed remains unchanged.

The cheapest sandship is a sandskiff used by marauders in the dunes. It is the size of a rowboat and can travel about 2 mph depending on the wind. It requires one person proficient with sailing the vessel to pilot it and has room for two more passengers or an equivalent amount of goods. Cost: 62 gp.

You exhale a breath of the driest air, instantly drawing water from flesh and bone. Each creature in a 25 foot cone burst must make a Constitution saving throw. On a failed save the creature takes 1d6 Strength damage as muscle, flesh, and bone become dry and brittle, or half damage on a successful save. This spell targets living creatures only. If this spell causes a creature’s Strength score to reach 0, it falls unconscious. 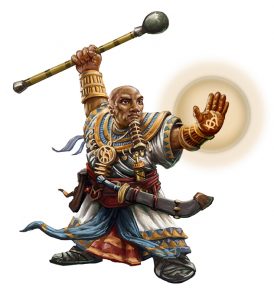 You awaken the spirit that resides within an inanimate object and ask questions of and receive answers from it. This spell doesn’t make them any more friendly than normal. Wary and cunning spirits are likely to be terse and evasive, while the more stupid ones make inane comments. If an awakened spirit is friendly toward you, it may do some favor or service for you if you can convince it to do so. Outside of areas where spirits are particularly active, the spirits contacted by this spell can only be active during the spell’s duration.