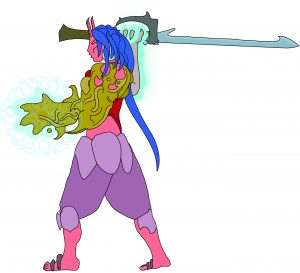 The gauntlet witch archetype first appeared in Kobold Quarterly #23, offering a vibrant alternate option for playing a witch. This article details the tiefling racial variants of the gauntlet witch in Midgard.

By turns imposing and sneaky, demonhand witches are often reavers and raiders, seekers after lost Caelmarath arts and leaders of motley bands of cutthroats and ne’er-do-wells. Their golden fiendflesh gauntlets are equally changeable, possessed of fiendish sentience and the power to flash as if composed of hellish flame or to become almost incorporeal, dark, and shadowy. Andek Fehrus, supposed scion of Demon Mountain sports a golden fiendflesh gauntlet, but his claim to be a demonhand witch or a son of the Master of Demon Mountain has never been proven.

A demonhand witch’s golden fiendflesh gauntlet has the following modifications:

A golden fiendflesh gauntlet reaches from the hand to the upper arm and provides protection equal to that of leather armor. Due to its mutable form, Climb, Escape Artist, Disguise, Sleight of Hand, and Survival are all class skills for the demonhand witch.

Sapience (Su): A golden fiendflesh gauntlet’s rudimentary mind possesses an Intelligence score of 5 at 1st level—this increases by 1 for every two demonhand witch levels. Its Wisdom, Charisma, and Ego are otherwise unchanged.

Bloodfinder (Su): A demonhand witch can set the golden fiendflesh gauntlet on the trail of any living, undead, or outsider foe that they have previously encountered. The demonhand witch adds 1/3 his or her level (minimum 1) to Survival skill checks to follow or identify signs of passage.

Fiendish Intuition: The golden fiendflesh gauntlet is attuned to the vibrations and emanations of outsiders. The demonhand witch gains a +2 bonus to Diplomacy checks when dealing with outsiders and may cast detect outsider* (see below) 3/day, gaining an additional use of that spell for every 3 levels of demonhand witch the tiefling possesses.

Fiendish Form: At 3rd level, as a free action, the demonhand witch may choose to make the golden fiendflesh gauntlet alter its form by either flaring up with the light of fiendish might (as the light spell, also provides a +2 to Intimidation checks) or becoming shrouded in darkness (as the darkness spell, also provides a +2 bonus to Stealth checks; this stacks with the tiefling’s Skilled racial trait). The golden fiendflesh gauntlet can create this effect once per day, with an additional use for every 3 levels of demonhand witch the tiefling possesses.

Foe Harrier (Su): At 5th level, the golden fiendflesh gauntlet adds a +2 circumstance bonus to damage when used to attack foes (either in straight melee or in conjunction with an aegis strike, pain clasp, or improved pain clasp) successfully tracked using the bloodfinder ability.

This spell functions like detect undead, except that it detects the auras of outsiders.