Skip to content
Home / Delve into the Depths in the Kobold Blog / Grand Duchy: Notables of the Northern Coast of the Arbonesse, Part 1 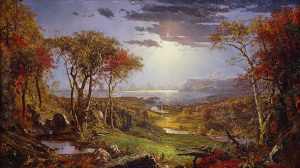 Between the Tilted Tower at the far western extent of the Arbonesse and the outflow from the Neurabon River is a rugged, ruin-littered coastline; in length, well in excess of 600 miles. Beyond the inhospitable shore are cold waters of the Western Ocean that cover like a blue-green blanket the sunken forest scholars now call the Lost Arbonesse.

The coastal settlements are temporary, born from necessity and opportunity rather than a desire to establish roots. Pioneers too often find the landscape daunting: haunted by ghosts, banshees, and wights; a forest’s edge guarded by sentinel trees; and a watery approach claimed by aggressive sahuagin and aquatic elves. Even reavers from the Northlands shy away.

Yet, there are hardy and determined folk here. They are the brave, desperate, forgotten, and the sinister.

Campfire tales speak of an ancient gearforged who roams the northern forest like a ranger. The bards call him the “Ghost-forged.” He has been reported stalking hunting expeditions and adventuring parties, following them for leagues, but always staying out of their reach and eluding their scouts.

The gearforged is eerily silent for a metal-clad being, and even the most hawkeyed elf hunters report seeing only glimpses of him gliding through the green. He also has been seen standing like a statue, as if he had been watching an encampments for hours, then vanishing into the shadows if he is spied.

Eyewitnesses agree on the curious nature of the being’s metal casing. Unlike the sleek armored shell of modern gearforged, the “ghost-forged” housing bears elaborate engravings of knotwork, flowers, and stylish representations of the masks of elven gods. The armor is also appointed with decorative flourishes, giving it an antique appearance. The face bears an expression of curiosity, one eyebrow raised high, and pointed ears to show its affinity to the fey.

Storytellers speculate that the “ghost-forged” is, in fact, Wyndsor, one of the earliest gearforged created as a peace offering by the neighboring dwarves. If so, he is perhaps the last survivor of the cataclysm that sent Lost Arbonesse crashing into the ocean and knows many secrets of that fallen kingdom.

Vandersnow, Ghoul “King” of the North

Vandersnow, a darakhul, is sorrowful and bitter—moreso than is usual for even his kind. Exiled from Darakhan for insubordination, he fled into the Arbonesse, emerging 200 miles west of the mouth of the Neurabon River. There he spied a relatively intact fortress of dark stone. He appropriated it from the pirates who were using it as a hideout and made it his own domain.

Vandersnow’s seat of power lies in the crypts, several basement levels beneath the main tower. He has drawn undead of many stripes to his service; the region is replete with ghosts and wights. The upper dungeons are occupied by lesser servitor races, such as goblins, bugbears and orcs. The goblinoids swore allegiance in exchange for protection from the undead minions that roam the coastline.

Mostly, Vandersnow is biding his time, hoping to unearth a secret within the fortress. He believes it must be buried somewhere in the fortress’s vast dungeon. Once discovered, he hopes to use it to regain his place in Darakhan society. Quite mad, he does not realize how deluded this aspiration is.

4 thoughts on “Grand Duchy: Notables of the Northern Coast of the Arbonesse, Part 1”