Skip to content
Home / Delve into the Depths in the Kobold Blog / Relics of Power Finalist: Golden Tresses of Sif 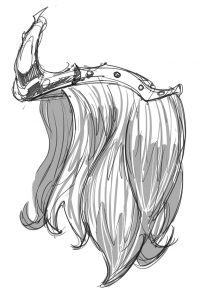 Welcome to the Relics of Power finals! Our fifth of ten finalists is the artifact called the Golden Tresses of Sif. Remember, these entries are unedited so that you can have a similar experience to the one that the judges had while reading them. As a special treat, we are posting each one with an illustration that Chris McFann made for the item. So, on to the artifact!

The Golden Tresses of Sif

Loki once shorn the golden locks of the beautiful Sif and her husband Donar forced the trickster to have a golden headpiece made to replace the hairs of his beloved wife. This magical wig attaches itself to the wearer’s head and the hairs then grow like real ones, although the owner can change her hairstyle, coloration, and hairs’ length on a whim.

The golden tresses of Sif grant the wearer an enhancement bonus to Charisma of +8 for as long as the headpiece is worn; note that when the character specifically opts for blond hues (ash-blond, flaxen, golden blond, strawberry blond, etc.) the tresses grant an enhancement bonus to Charisma of +10. These magical tresses also greatly improve the effectiveness of a disguise, and this regardless how much the character is changing her appearance (no check modifier to your Disguise check, regardless the age, gender, race, or character’s size you chose to impersonate). Moreover, if you ever impersonate a particular individual, those who know about that person don’t get a bonus on their Perception checks when looking at you except if they intimately know the subject.

The tresses also provide advantages with all the skills that are based on Charisma as follow:

Bluff: Your opponents are blinded by your otherworldly beauty and you always succeed when feinting (for more information on feinting in combat see Pathfinder Roleplaying Game Core Rulebook, Chapter 8).

Diplomacy: Creatures always become friendly in your presence, unless you have taken aggressive actions towards them first. If you ever attack the creature won’t remain friendly of course and won’t fall for the same trick twice.

Intimidate: Your comeliness is almost alien to some and when you successfully demoralize an opponent the target is stunned instead of shaken.

Perform: When a bard, skald, or any performer rolls a Perform check during a Bardic Performance or else, she receives a +5 circumstance bonus.

Use Magic Device: When a character tries to emulate an alignment, class feature, or race the Use Magic Device checks are lowered by a factor of 5 in that case.

Finally, a lock cut from the golden tresses of Sif looks like gold filaments; a single lock is worth 1 gp, even though the wig cannot produce more than 1d100 gp per day in this fashion. Locks cut after that will turn out to be made of copper instead of gold.

The gold used to fashion the golden tresses of Sif can be melted down only in the forge where the artifact has been originally created, that of the Sons of Ivaldi.

If someone ever discovered the scissors used by Loki to cut the genuine hairs of Sif and employed them on the golden tresses the wig would be utterly destroyed.

5 thoughts on “Relics of Power Finalist: Golden Tresses of Sif”