Skip to content
Home / Delve into the Depths in the Kobold Blog / Relics of Power Finalist: Gordian Knot 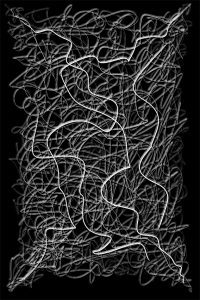 Welcome to the Relics of Power finals! Our sixth of ten finalists is the artifact called the Gordian Knot. Remember, these entries are unedited so that you can have a similar experience to the one that the judges had while reading them. As a special treat, we are posting each one with an illustration that Chris McFann made for the item. What have we here?

This hopeless tangle of knots can either be stretched out to a roughly 30′ x 10′ tapestry or wound around the belt and shoulders. At a distance, it appears woven of white silk, but closer inspection reveals it to be of the same shimmering material as the silver tether of an astral projection spell.

The Gordian Knot is a stolen piece of the great extraplanar tapestry that powers all divination magic in the multiverse. This tapestry is a sacred treasure to the gods of destiny, but it is occasionally stolen by an alliance of seven pit fiends who desire its protection from the near-omniscience of the gods.

It was during one such theft that the pit fiends crafted the Gordian Knot, its tangles rent from the great tapestry as the solars came to reclaim the priceless treasure. Even with the tapestry returned to its rightful place, this small shard provides a conduit to the very threads of divination magic, shielding its user—and its eventual destroyer—from magical probes.

If the Knot-wielder wears this artifact as a belt, he benefits from a continual detect scrying effect. This is a constant power and has an effective caster level of 20 in regards to counter-scrying efforts.

The greater powers of the Knot require the Spellcraft and Sleight of Hand skills to study and manipulate the Gordian Knot. There is no limit to how many times these powers may be used. A character must be touching the Knot in some way to activate these powers. If multiple people are touching the Knot, only the first character to touch it may use its powers.

Other than this restriction, this item does not recognize a designated “user.” Wearing the item as a belt guarantees that only the Knot-wielder has access to its powers.

Whenever the Knot-wielder uses Spellcraft to identify a divination spell, he learns not only what spell is being cast but also its caster level, source (cleric, wand, etc.), and exact parameters set at the time of casting. This information appears as a faintly glowing tangle in the Gordian Knot.

Additionally, a Knot-wielder can spend one hour to make a Spellcraft check to identify a random divination that includes him as a subject as though the spell had just been cast. This power extends to such open-ended spells as augury and find the path provided that they involve the Knot-wielder in some way. A Knot-wielder cannot specify a specific divination—it is always random.

If and only if a divination spell is identified by either use of the Spellcraft skill, it can be “untied” at any point in the next 24 hours with the Sleight of Hand skill.

While Spellcraft allows for the identification of a divination spell, Sleight of Hand is used to dispel it. This functions as a magically undetectable mage’s disjunction with a caster level check equal to the Knot-wielder’s Sleight of Hand roll.

Attempting to untie a spell is a standard action that provokes an attack of opportunity. It requires at least one free hand, and the Knot-wielder receives an additional +2 to their Sleight of Hand check for every additional hand or hand-like appendage that they assign to the task.

The Gordian Knot has 50 hit points and can only be damaged by slashing weapons, but it instantly regenerates all hit points as soon as they are lost. Thus, only a being capable of dealing 50 points of slashing damage with a single strike can destroy the Knot.

If the Knot is destroyed, the creature making the attack becomes utterly invisible and unaccountable to all divination effects. This protection extends to all the destroyer’s personal equipment. Divination spells that include him in their area of effect simply fail to recognize him, while targeted divinations fail as though he did not exist. Open-ended divinations like augury simply fail to account for his presence when calculating the outcome of a proposed course of action. Protection from open-ended divinations also extends to the destroyer’s followers when their actions are the direct result of his commands.

Only a miracle cast by a high priest of a god of destiny while the destroyer is in contact with the original divination tapestry can dispel these effects. Even if the destroyer is killed, the powers of the Gordian Knot continue to shield his corpse from spells like speak with dead, locate object, and find the path. Open-ended divinations do not consider the possibility of the destroyer’s resurrection, reincarnation, or undeath.