Skip to content
Home / Delve into the Depths in the Kobold Blog / Relics of Power Finalist: Gnomeskull of the Kobold Kings 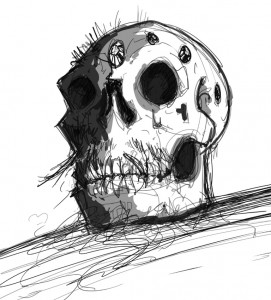 Welcome to the Relics of Power finals! Our fourth of ten finalists is the Gnomeskull of the Kobold Kings. Remember, these entries are unedited so that you can have a similar experience to the one that the judges had while reading them. As a special treat, we are posting each one with an illustration that Chris McFann made for the item. Kobold kings, eh?

The Gnomeskull of the Kobold Kings

Within the kobold ghetto, swarms of tiny hustlers and thugs, miners and shopkeepers strive mightily each day to elevate themselves to the airy reaches of kingship. They seek the status and power that comes along with such rank, and the symbols of that status. What a kobold values is not what a human values, necessarily. Both races value precious metals and magical objects, it is true. However, a prince of the seven cities would not wear the same finery as a scion of a kobold king, in fact, the human might well not recognize his kobold counterpart as a noble at all. And where the human monarchs of Midgard wear crown and hold scepter, the awful power of the kobold king of kings in Zobeck is signified by the ancient relic known only as the Gnomeskull.

The Gnomeskull is indeed the skull of a gnome, said to be that of an ancient gnomish king dragged down and slaughtered by an founding tribe of Zobeck’s kobolds. It is said that this gnome was a very devil, who sent his servants out to torture and harass the kobolds as they mined silver. Finally, the greedy gnome was convinced to attend a great feast in his honor, and the kobolds slaughtered him and his family when they were drunk with wine and filled with meat. The kobolds achieved this by releasing a horde of starving dire weasels into the room and watching the fun from the gallery above.

The Gnomeskull possesses a distinct odor of wine and gnome blood, faint to a human, but strong to an race with keen noses, like elves or kobolds. Rough garnets the color of clotted blood have been pounded into the skull, along with nails of silver and gold. Around lower edges of the brain-case, the tails of giant weasels have been attached, giving the item a furry fringe. The jaw has been wired to the skull with silver wire from the mines of Zobeck, and a wispy fringe of beard and mustache cling to the bits of dried skin around the skull’s mouth. Runes of foul power have been chiseled into the bone.

The Gnomeskull grants the power at will for the possessor to detect lie as a spell like ability with a DC of 25. For this effect to work, the target must be touching the skull. The skull will groan and chatter as if the bound mouth is attempting to speak if the target lies and fails the saving throw.

Three times per day, the gnomeskull can be used to effect kobolds with one of two powerful effects. These effects work within a 200 foot radius from the holder of the skull, who must brandish it and speak inspiring words in kobold to activate the power. The skull’s possessor may use the bardic powers of Inspire Courage and Frightening Tune. The save DC on the Frightening tune is DC 20. Both effects work only on kobolds.

Three time per day, the gnomeskull can summon a pack of 2d6 incorporeal dire weasels. The creatures attack and damage as normal, but possess the damage reduction and ability to move through objects of incorporeal creatures. The Dire weasels are summoned for 10 minutes, and take the form or translucent, undead weasels with hollow eye sockets.

The possessor of the gnomeskull begins to feel a bizarre hunger for fresh gnomish blood, which is not often considered a drawback by the kobold kings. More distressing are the recurring nightmares of being slaughtered by dire weasels at a feast.

If the Gnomeskull’s detect lie ability is used by a gnomish priest to verify the marriage vows of a gnome prince and princess in a sanctified temple of a gnomish god, the skull will shatter into six hundred and sixty seven pieces, never to be reformed.

10 thoughts on “Relics of Power Finalist: Gnomeskull of the Kobold Kings”