Skip to content
Home / Delve into the Depths in the Kobold Blog / Memoirs of a Lich: Restraint 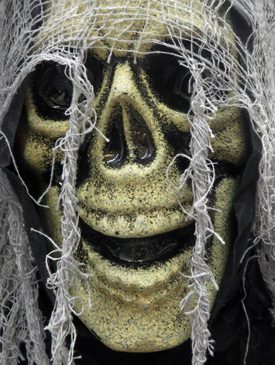 This is Osvaud. We like to joke, but being an awesome antagonist is a big responsibility. You are always going to be vastly more powerful than the burglars wandering into your villainous clutches. You can’t only entertain yourself. You have to think about what’s going to be enjoyable for the dopey meatsacks too. Seems counterintuitive, right?

Which brings us to today’s topic: restraint, or why you can’t simply hilariously murder everyone who shows up.

Let’s illustrate the point with a hypothetical example. Let’s say you create the deadliest series of challenges ever devised. You throw down every dirty trick you can imagine and abandon any sense of fairness. Even the first room is a murderous abattoir, filled with impossible to find spiked pit traps covered in irrevocably deadly poisons. You build this masterpiece and wait for the blood to flow. The first few times, it’s amazing, but word gets out, and everyone stops showing up. Those that do don’t last long.

People who are cunning and powerful enough to truly defeat you generally have better things to do. They are also more than capable of directly targeting you and lack the necessary patience to toddle through a death trap-filled basement littered with magical junk. Then there is a wide range of people who could maybe push themselves to handle your best but aren’t stupid enough to try without darn good reason. You are left hoping for that handful of burglars with the perfect combination of intelligence and arrogance.

There is a stark divide between villains with an element of restraint and the chaotic evil jackasses who ruin things for everyone. The whole dynamic between antagonist and protagonist is usually a complicated system of counting coup. It’s not that you can’t kill them. It’s a dangerous career they’ve chosen, and they even love that aspect of it. However, you need to accept that they’ll get back up after finding a sufficiently sizable diamond. They probably also realize it takes more than some love taps with a holy mace to permanently take you down.

Consider yourself a concierge working in an extremely niche portion of the service industry. Your clients are thrill-seekers on the lookout for power and wealth, but the world is filled with opportunities. Thus, your offering has to be deadly but not suicidal. It should also be classy, intriguing, and unique to really draw them in. Unfortunately, even the craziest adrenaline junky balks at a coin-toss chance to die. In my experience, the sweet spot is a kill ratio of about 10-15%.

So if six or more people show up, you can kill one of them. If two groups of five or less show up at different times, you can kill one person from one of the groups. If you find yourself going over those numbers, take it down a notch. Likewise, if you aren’t hitting the marks, feel free to up the difficulty.

Finally, it is a good policy to straight-up murder every tenth team. It helps establish your “ruthlessness.”