Skip to content
Home / Delve into the Depths in the Kobold Blog / Trapmaster: The Woodpile

Reaching out to grab the handle of the axe, Mira sighed and thought to herself, “This is why I left the farm. I never did much enjoy morning chores…”

A 35-ft.-long tree trunk rests on the ground in the middle of a 15-ft.-by-55-ft. chamber, a whirring saw-blade spinning four feet above the felled timber. A woodbin just inside the door holds twelve split pieces of wood. A similar bin on the far side of the room near the exit stands empty. An axe with a brass plate mounted in the handle rises from an old headsman’s block now used for a more prosaic purpose, the blade buried in the bloodstained surface. An engraving on the brass plaque reads:

Split timber,
Half to one side,
Half to the other,
Avoids the cut
that precedes the fall.

The tree trunk and the axe both emit an aura of transmutation magic, overwhelming and masking detection of the illusion covering a central pit spanned by the log. Probing more than 5 feet beyond the end of the log reveals the illusion but does not dispel it. 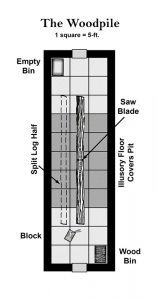 The sawblade looks suspiciously like a trap, but careful examination reveals that other than making crossing the room on the log a cautious affair, it only threatens a would-be saboteur. The (non-magical) split wood in the bins is misdirection, having nothing to do with crossing the room safely.

Accomplishing a safe crossing requires striking the log with the magical axe. The log splits down the middle and, with good balance, provides two safe bridges across the pit. The half that remains under the sawblade is difficult for Medium and larger creatures to navigate because of the spinning blade. Half of the party must cross on each of the split lengths: if more than half use one side or the other, the spans segment into 3-ft. sections (as if cut by a cross-cut saw) when the extra creature reaches the midpoint, tumbling into the pit along with any creature on either log. The log rematerializes whole one round later, and the process must begin anew, safe crossing numbers determined by the number of creatures on the chopping block side when it does so. A creature trying to cross an un-split log triggers the same transformation once she passes the midpoint. Attempting to disarm the spinning blade does not require crossing center. Flying, jumping, or climbing the walls to avoid the pit counts against the quota of the nearest split log as the creature crosses over or against the center log if it is not yet split. Illusions may fool the visual trigger, which tallies the count.

Magical Auras: moderate transmutation (DC 20) from the log and axe

Smooth Walls (Climb DC 20): Acrobatics DC 17 to cross the split (or un-split) log under the spinning blade, DC 12 to cross the other half. Taking 10 is not permitted under the blade unless the false trap is disarmed; under the blade is DC 12 for Small creatures. Carrying logs from the woodpile in one’s arms increases the DC by 1 for each log carried.

Trigger attempting to disarm the blade; Reset automatic
Effect +10 melee (3d12 slashing damage plus new Acrobatics check or fall into pit if hit)
* Exceeding the DC by 5 or more reveals the blade is harmless other than as a distraction.

A 60-ft. deep pit deals 21 (6d6) bludgeoning damage; a DC 14 Dexterity save avoids the pit if tricked by the illusion. A DC 15 Dexterity (acrobatics) check crosses under (or approaches) the saw blade unless Small (DC 10), and DC 10 check traverses the other half of the split log. Sabotaging the blade requires a DC 20 Dexterity check and grants advantage to those passing under it on their check. A DC 20 Intelligence (investigation) check reveals the blade’s true purpose as a distraction (and advantage gleaned for disabling it). The blade deals setback damage on a failed disarm and provokes a new Dexterity (acrobatics) check to avoid a fall if damage is dealt.

The pit trap deals Hard multiple-target damage; avoiding a fall after being tricked by the illusion is a Hard task. Crossing under, or approaching the blade is a Hard task (reduced to Normal if the blade is disarmed) and Small characters gain a +2 bonus to the check; crossing the other half of the split trunk is a Normal Task. Recognizing the blade’s purpose is a Hard Task, as is disarming it. Failure results in a Normal single-target attack roll and damage, and triggers an immediate Hard check to maintain balance and avoid the pit if struck by the blade.

The pit is 30-ft. deep (3d6 falling damage); a successful Saving throw avoids the pit if tricked by the illusion. A 3d6 Dexterity Check passes under, or approaches the blade safely (2d6 for Small characters or if disarmed), while a 2d6 Dexterity check allows safe crossing on the second half of the split log. Disarming the blade requires a delicate-tasks check or spiking it by rolling a 1 on a d6 and allows Small characters to cross freely. Failing the disarm roll results in a +4 melee attack dealing 1d8 damage and provokes an immediate Saving throw to avoid falling if the blade connects.

4 thoughts on “Trapmaster: The Woodpile”