Skip to content
Home / Delve into the Depths in the Kobold Blog / Never Work for Wizards: The Magocracy of Bemmea and Allain 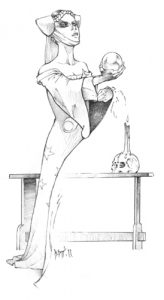 A word of advice to all those who think things get better once you leave the Goblin Wastes and enter the safe lands of the Magocracy of Bemmea and Allain: Things don’t really get better.

The Exarch and all those mages cracked open the walls of the reality. The madmen of Caelmarath called down the Elder Things, the Waste Walkers, the horrors that stand frozen on the ashen plains from the western sea to the Ironcrags. Those fine folk broke the world, and all power is theirs to command, and their feuds are something to avoid.

So, never take work from the magocracy, if you can help it. Thing is, you can’t really avoid it. A Bemmean wizard will show up and will tell you what the job is; they never ask, and somehow, you always find yourself nodding and saying yes, probably because the wizard has snared you with a charm without you noticing.

‘Course, the wizards will want to “secure” the work with a simple deal, like an invisible spirit follower (to make sure you’re on the job all the time), and ink magic on your forehead or your hands (so people know which mage you are working for), and maybe a few albino ravens and a goblin guide just to be sure you don’t lose your way. So… You’ll do the work. If you don’t take the job… Well, your ghost will do the work.

Yeah, the money’s great. Platinum, gold, diamonds. Wizards don’t seem to blink when you name your price, so think of your usual fee and then triple it. They won’t care. And trust me, you’ll earn it when the Bronze Men of Carrefay come looking for your trail, or the Hunters of Ambross eat your last horse.

The Magocracy
The magocracy of Bemmea and Allain is a successor state to the Kingdom of Caelmarath, a great empire of humans who rose up after the fall of Ankeshel to challenge the might of the Valeran Elves — and who succeeded far beyond their imaginings. The wizards were human at first, and arrogant as wizards are, and they built on the strongest ley lines and broke the walls between this world and others to call up servants.

Over time, the people of Caelmarath gathered power from dark springs, and some became tieflings. And in time, their magic destroyed Caelmarath entirely, destroyed the competing magocracies within and around it, until only one was left. That one, the cruelest and most dangerous of them, survives, a city suspended and protected by magic when all the land around it sank into the ocean.

The Wizards
The creatures that are wizards now are hard to call human. They are tainted by the Realms Beyond, they are warped by the bargains they made. Many are the offspring of demons, or have infused themselves with the blood of devils and the dust of liches, to strengthen their own prowess. A few walk about under illusions as fair as any elf princess, but most don’t bother. Instead, their hoods are damn deep and damn dark for a very good reason. Somewhere under those hoods, their lambent eyes glow greenish-yellow or silvered purple—and the wizards might have a single eye, or a dozen.

Teleporting as often as breathing, able to paralyze a foe’s lungs or inscribe their flesh with glyphs of everlasting pain, the wizards of Bemmea are cruel, negligent, dismissive of the peasantry around them. And yet, they are strangely polite and even deferential to the White Knights of Bourgund! When asked about this, they invariably change the subject.

Six Wizard’s Servants
In addition to the usual familiars, unseen servants, and various constructs, the wizards of Bemmea and Allain also command dozens or even hundreds of different magical servants from the Realms Beyond. These six are relatively well known to the humans and tieflings of Bemmea:

Aalala Hachmal, the Laughing Devil: A particular creature of the Western Wastes, always laughing when it speaks, mocking, puzzled, and causing horrible confusion when it passes. Some believe that Aalala Hachmal is a child of the Elder Things, and that it carries messages to them from the magocracy. If only those message could be intercepted, understood—and replaced.
the Bone Walkers: Simple servants who perform drudgery in wizard’s homes, such as drawing well water, grinding grain, or washing clothes. They are said to work only at night, falling into piles of dust by day. Some believe these are wizard’s ancestors or teachers, enslaved by their descendants or students.
the Bronze Men of Carrefay: Named for their ruddy skin and strangely greenish eyes and hair, these are arcane assassins and planewalkers. Speechless, they become invisible at will, and prefer to fight with poisoned blades that temporarily destroy the arcane power of those they strike. Naturally, the wizards loathe them and have bound their souls to perpetual service, for fear others might use them against the magocracy itself.
the Howling Horror: A creature of reddish wings and a feathery, writhing underbelly, akin to a dragon crossed with a parasitic worm that devours it from within. It screams and howls incessantly. Said to roost on an island far off the coast, and summoned to shore only to destroy enemies of the state.
Ink Demons: Black, eyeless, and liquid, the ink demons are servants who may have taught the arts of ink and glyph magic long ago. They can hide within books, folios, and scrolls, and seem to have recently infested the Great Library of Friula in the Seven Cities.
the Marauder Giants: Enormous, pale, and tattooed ogres or giants who command nightmare spirit-beasts as humans might command a pack of hounds. They often serve as bodyguards, a wall of white, flabby flesh preventing anyone from reaching a wizard in their midst.

Interested in adding to the insanity that is the Western Wastes? Curious about the cruel wizards of Bemmea? Join the Midgard campaign setting project.

21 thoughts on “Never Work for Wizards: The Magocracy of Bemmea and Allain”