Skip to content
Home / Delve into the Depths in the Kobold Blog / Tome of Beasts: Tophet 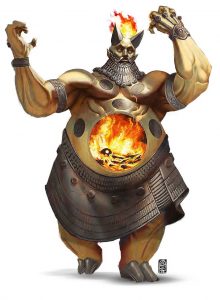 An enormous bronze and iron statue filled with fire towers above the ring of chanting, frenzied worshipers.

Tophets are used by worshipers of fire gods, who toss sacrifices into their flaming maws to incinerate them. A tophet has a large opening in the front where the flames can be seen; sometimes this is an enormous mouth, and at other times it is a large hole in the tophet’s belly. Horns and expressions of anger or wide‑mouthed laughter are common.

Eager for Sacrifices. Among fire cultists, it’s widely known that when a tophet’s hands are raised above its mouth, it is demanding a sacrifice to roll down its palms and into its fiery maw.

Heed Musical Commands. Flutes and drums can (sometimes) be used to control the actions of a tophet during sacrifices. They have the fortunate side effect of drowning out the cries and screams of living sacrifices.

Magical Fires. The fires within a tophet’s bronze body are largely magical and fueled by sacrifices. They don’t require more than a symbolic amount of wood or coal to keep burning, but they do require sacrifices of food, cloth, and (eventually) living creatures to keep them under control. A tophet that is not granted a sacrifice when it demands one might go on a fiery rampage, burning down buildings, granaries, or barns until its hunger is satisfied.

Fiery Heart. A tophet’s inner fire can be ignited or doused at will. Its heat is such that all creatures have resistance to cold damage while within 30 feet of the tophet.

Burning Belly. Creatures inside a tophet’s burning core take 21 (6d6) fire damage at the start of each of the tophet’s turns. Escaping from a tophet’s belly takes 10 feet of movement and a successful DC 16 Dexterity (Acrobatics) check.

Multiattack. A tophet makes two attacks, no more than one of which can be a gout of flame.

Gout of Flame. The tophet targets a point within 100 feet of itself that it can see. All targets within 10 feet of that point take 22 (4d10) fire damage, or half damage with a successful DC 16 Dexterity saving throw.