Skip to content
Home / Delve into the Depths in the Kobold Blog / Memoirs of a Lich: 5E Conversion 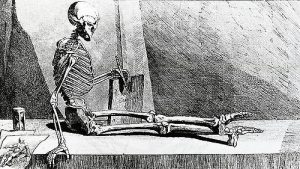 This is Osvaud. We have spent eons attempting to ascertain the deepest rules of the cosmos. With our hard-won knowledge, we have ascended to the heights of arcane power, conquered death, and swindled countless adventurers who couldn’t cast the identify spell.

Every now and then, we wake up, and… everything is a little bit different.

The big stuff almost always stays the same. Magic is the best thing ever. Your soul is safely stored in a mystical mason jar. Ivlysse is still your (contractually obligated) impish BFF.

However… important details are different. On the one hand, it is fun to try and puzzle out the shift. On the other, you want to spam the deities-in-charge with strongly worded sendings after learning a slack-jawed, chicken-worshiping acolyte can concentrate on the same number of spells as you.

It wouldn’t be productive, so instead, you get your bones back to basics. You start trying everything you think you know and learn whatever you don’t. You antagonize a few dozen, angst-ridden orphans with a series of increasingly difficult challenges and see what they can accomplish in a few years.

Despite the difficulties inherent to any transition… unlife goes on. This wasn’t the first time, and it won’t be the last. Thus, I feel it is important for me to document my initial (incredibly embarrassing) thoughts using perfect recall granted by the modify memory spell (which I can apparently now cast) for the sake of future me.

Whoa. Weird.
Where did all my 9th-level spell slots go?!
Oh… no. No no no no no…
… what the hell is a “warlock,” and why do I need to multiclass three levels for freaking Ivlysse?!
Okay. You need to calm down, Osvaud.
You can handle this. Pretend to breathe deeply.
Start with priority one. You’re a lich.
That’s still got to be the most awesome thing ever, right?
Resistances… immunities… good good. Legendary resistance? Don’t mind if I do!
Rejuvenation, paralyzing touch, lair actions… this isn’t looking too bad.
Oh hey, if I’m an NPC, I can totally just get an imp familiar!
Well, on to the lore, I guess. Hmmm… let’s see… soul sacrifices…
I HAVE TO FEED MY PHYLACTERY SOULS OR I GO DEMILICH?!
WTF!
I don’t even know where the damned thing is!
What in the Nine Disco Dancing Hells does “periodically” mean?!
Do I owe a freaking backlog?!
Oh yay! I guess I HAVE to keep it at least mildly accessible now! And it is even EASIER for holier-than-me jerks to be all judgmental!

It’s ALMOST like “someone” was concocting tacked-on reasons to make it easier to freaking perma-murder me.
Ow. Ouch. What was that? It felt… disturbing.
It was as if… millions of my currently active simulacrums cried out in terror and were suddenly silenced.
No! Not the perfectly loyal efreeti armies! You monsters!
I take it all back! I’ll do anything you want! I’ll even multiclass!

Well, there you have it. Not too pretty.

Osvaud… over an eternity, sometimes we are going to fall off the phantom steed. What’s really important is you get up, dust yourself off, and then never cast the silly spell again. Because it is way worse, and only damaging cantrips improve with increased character level now.

6 thoughts on “Memoirs of a Lich: 5E Conversion”