Skip to content
Home / Delve into the Depths in the Kobold Blog / Lethal Lairs Finalist: The Matter of the Oasis

Welcome to the second of the Lethal Lairs finalists, which are presented in no particular order. Our esteemed judges have enjoyed going through each of the entries for this contest, and now you can read each of the five they chose as finalists! After we present all five — unedited — you’ll have a chance to vote for your favorite. Thanks go to both our entrants and our judges for their work! And now, finalist Andrew Harshman presents you with his Red Cliff raiders encounter — enjoy!

The Red Cliff Raiders have just pulled off the greatest heist of their collective careers. In the desert, there are few resources more valuable than water.  But why stop at stealing the resource when you can go after the source? Through the creative use of transposition teleportation, the raiders have stolen the only water source on the Talasis merchant route. Effectively shutting down trade on one of the largest and most profitable routes in the region.

This water source, a healing, arcane oasis has provided drink to the area’s caravans for centuries. Because its source is magical and not an underground waterway, the Red Cliff Raiders were able to teleport it away intact. A  patch of rocky reddish earth has appeared in its place. The means of teleportation was a one-to-one swap. The oasis has switched places with the area it was transported to.

With the oasis gone and trade disrupted, the raiders have publically issued a formal ransom to local leaders. They have demanded what amounts to a fortune in exchange for the safe return of the arcane oasis. Though it is within the Red Cliff Raiders’ power to undo the magic and teleport the oasis back, the leaders are hesitant to trust them. Negotiations have stalled and the region has been left in a state of discord.

Getting the Party Involved

Presented below are some example adventure hooks:

The Red Cliff Raiders’ hideout lies in a set of canyons east of the Talasis trade route. This area is very remote and the bandit group is rarely disturbed. The oasis has been teleported here. The location of the raiders’ base can be determined in a number of ways: 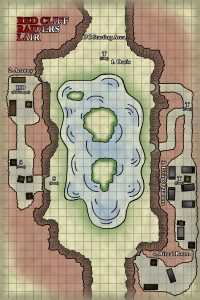 Arrival at the Raider Base

Travelling to the bandit’s canyon hideout takes roughly 2 days. The journey is relatively easy for PCs accustomed to desert living. Constitution checks may be needed for those less familiar with the desert. When the characters arrive, read or summarize the following:

An expansive canyon network lies before you. The shaded crevasses concealing all that resides below. As your eyes adjust, the many descending pathways become more visible, their secrets revealed. The crimson cliffs that flank one passage arouse your attention. Without question, this must be the domain of the Red Cliff Raiders.

The Red Cliff Raider hideout can be breached in various ways, possible options include:

The Red Cliff Raider leader, a half-red dragon named Krakin Darnak will question the characters at map location 2. Indecisive and paranoid, he will ask about their employer and the specifics of the ransom delivery. All Charisma (Deception) rolls made by characters will be opposed by active Wisdom (Insight) checks from the half-red dragon. Upon failing a single Charisma (Deception) check, he orders the raiders to attack.

Lighting: Bright light. Natural light from above the canyon. The oasis casts a pleasant blue glow in all directions, illuminating shady portions of the canyon. Cavern spaces are lit with torches.

Canyon Terrain: The walls of the canyon are 100 feet high.

Healing Arcane Oasis: Difficult terrain. The water  is only a few feet deep, but magically replenishes itself. The oasis is imbued with healing power. Any creature with at least 1 hp starting its turn in the water regains 5 hp. If 3 creatures are slain inside the oasis, its healing properties are dispelled.

Character Knowledge: Magically inclined characters are aware of all the above information. It is critical that the oasis be protected.

This is considered a Hard encounter for a party of 5 level 5 characters. If the party is significantly underpowered, consider removing 1 scout, 1 thug, and dropping the Half-Red Dragon’s hp by half. For overpowered parties, on round 3 of combat, an additional 1 Scout and 2 thugs arrive as reinforcements.

All members of the Red Cliff Raiders will utilize the healing properties of the oasis. At the start of combat the half-red dragon veteran leader commands the rest of the raiders to attack:

“Red Cliffs, kill these cravens! -just not in the oasis!”

The half-red dragon veteran will use his breath weapon only to target multiple enemies. He will attack any characters that are clearly spellcasters, for fear that they will teleport the oasis away.

Red Cliff enforcer thugs will support their leader, provoking opportunity attacks to remain near him.

All the Red Cliff Raiders are proficient in the use of climbing gear and grappling hooks. Both Red Cliff stalkers scouts will use their movement to grappling hook 15 feet up the canyon walls, holding themselves aloft with harnesses. Attacking from this position grants them advantage. The ropes are AC 15 and have 10 hp.

Performing this ritual requires 3 successful DC 20 Intelligence (Arcana) rolls. The oasis disappears in the flash of darkness, reappearing at its original location on the Talasis trade road. Before initiating combat, it is possible to infiltrate the Raider base and teleport the oasis. Still treat the oasis map area as difficult terrain as it has been replaced with uneven, rocky ground.

When combat concludes, the party is free to carry out the teleport spell. If 3 creatures were killed in the oasis, its healing magic is lost. Displeasing news to any party patrons. The adventure can proceed in various ways:

4 thoughts on “Lethal Lairs Finalist: The Matter of the Oasis”