Welcome to the third of the Lethal Lairs finalists, which are presented in no particular order. Our esteemed judges have enjoyed going through each of the entries for this contest, and now you can read each of the five they chose as finalists! After we present all five — unedited — you’ll have a chance to vote for your favorite. Thanks go to both our entrants and our judges for their work! And now, finalist Matt Roth presents you with “Rustrock Spring” — enjoy!

Secreted away in the arid, rocky foothills of the Red Rock Mountain Range, this small spring has long been a carefully guarded secret for travelers on westerly journeys. The quiet waters are secluded enough to provide shelter for travelers from the wildlife that frequents the spring. Until the arrival of the Red Cliff Raiders, the spring was a safe stopping point for any traveler along the western roads.

Dwelling in larger tribes high in the mountains, these tribes of rusty, red-scaled kobolds have begun to scour the deserts at the behest of Qaerathyx, their young red dragon master. While the dragon himself sits upon his hoard, his lesser, distant kin do his dirty work. Knowing that Rustrock Spring was a frequent respite for caravans and traders, he claimed the land as his own and instructed a band from the Red Cliff Raiders to set up camp and extort any who dared to use ‘his’ spring.

Embracing their innate resistance to fire—both an adaptation to the heat of the desert highlands and a sign of their distant heritage—the Red Cliff Raiders use copious amounts of fire to cow travelers into surrendering their valuables. Knowing that rampant slaughter would only bring unwanted attention to their operation and their master, they kill only the most uncooperative foes. The fact that many that escape from Rustrock Spring with their lives soon perish from exposure does not concern them. Qaerathyx, not fully trusting the greedy kobold tribes to do his bidding, has sent one of his youngest progeny both to aid them and to intimidate the kobolds into obedience—a young half-dragon monitor lizard.

The PCs may arrive at Rustrock Spring while traveling along the road themselves or may have been hired to locate one of the many travelers that have gone missing along the western roads. 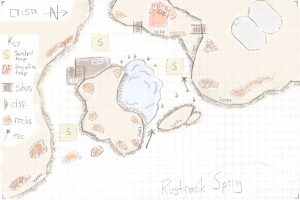 Desert sands give way to dry, dusty dirt and hardpacked red stone as the Red Rock Mountain range rises in the distance. Twenty-foot tall stone rises jut from the earth as the ground between them slowly slopes upward into the foothills beyond. Jagged outcroppings stand between and above the rocky cliff faces. Sparse shrubbery and a pair of half-dead desert palms grow around a small pool of coppery water.

Only roughly half the Red Cliff Raiders assigned here remain on guard over the spring, while the others rest and keep out of the sun in their sod hovels. Unless PCs are particularly loud or obvious while approaching the spring, only two watchers, one raiders, and a single trapper are on watch. The monitor lizard lazes in the spring all day, enjoying the warm waters.

Once the PCs approach within 10 feet of the rocky outcroppings or the spring, the kobolds shout demands for the PCs to drop their valuables and flee into the desert in their broken Common. If the PCs do not immediately comply, the kobolds atop the cliffs begin to pepper them with crossbow bolts, concentrating fire on the softest targets first.

If conflict breaks out, the shouts and yips of the kobolds alert their companions, who prepare themselves and join the battle within 1d4+1 rounds.

The numerous stones and obstacles along the top of the cliffs provide partial cover to the kobolds hiding behind them. Between the height and the cover, they have ample room to hide their red-scaled bodies. The cliffs themselves are fairly easy to scale, offering plenty of handholds for would-be climbers. It is a DC 15 Climb check to scale the wall unassisted. If climbing close enough to one of the desert palms to brace against it, this is only a DC 10 Climb check.

The spring is fairly shallow, reaching only 10 feet at its deepest point along the cliff wall. The water is tinted slightly red from the iron in the soil, tasting somewhat metallic, and is tepid from the beating sun, but remains safe to drink.

Though the kobolds typically keep their spoils in their sod huts atop the cliffside, they haven’t collected much since their last shipment of tribute to Qaerathyx and possess little more than their gear. The huts are cramped for medium-sized creatures and stand roughly 6 feet tall at their highest point.

Creatures: The Red Cliff Raiders have sent only a paltry force to control the Rustrock Spring, led by a pair of fire-obsessed trappers. Though they bicker over who is more suited to lead the group, all of the kobolds know to avoid the half-dragon lizard sent along with them by Qaerathyx. They both revere and fear the creature, knowing it could devour any of them with ease.

Before Combat The raiders remain hidden, using stealth to keep behind the various cover along the clifftops.

During Combat Knowing that their sheltered sniper perches are their best defense, they focus fire on any flying foes or anyone attempting to climb the cliff face. If caught in melee, they attempt to flee through traps to get back to a sniping position.

Before Combat If there is time before a fight starts, the trappers attempt to set up bomb traps in the narrows between the cliffs or at the tops of the staircases.

During Combat The trappers concentrate their bombs on the nearest grouping of foes. They trust their tribe’s innate resistance to fire to protect their allies from the flames of their bombs.

Before Combat The watchers remain hidden, using stealth to keep behind the various cover along the clifftops.

During Combat If pursued by melee attackers, the watchers will attempt to flee past the traps at the base of the cliffs, hoping the traps will trip up their foes while they escape.

Before Combat The half-dragon is more intelligent than average for its kind, but not by much. Enjoying its lazing in the spring, it will wait one round after combat has started before leaving the spring. If disturbed in its lair, it will immediately attack, regardless of what its kobold allies are doing.

During Combat The lizard uses its wings to chase down any flying foes, believing those to be the most tasty.

Traps: The Red Cliff Raiders have laid a number of fairly simple traps at the base of the cliff to deter attackers. While most of these are simple sand pits that only slow foes down, there is a single dragonfire trap, its magics granted to the kobolds by their draconic master and built into a masterfully carved draconic totem. Any lizard-like creature or humanoid with the reptilian subtype may pass the totem unharmed.

Hazard: The craftsmanship of kobolds is impressive, but somewhat shoddy for anyone larger than a kobold. The stairs are extremely steep, counting as difficult terrain. Additionally, both the stairs and platform are unstable and will collapse if two or more medium creatures stand on them at one time. All creatures standing in the area of the collapse (or below it) take falling damage as normal.