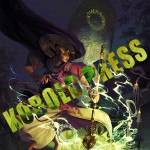 Back on June 10th, the Deep Magic Kickstarter began its interesting and rather spectacular adventure into the realms of Pathfinder magic.

As of this writing, it’s nearly at 1,000 percent of its original funding goal. That means that this is going to happen—this project is already funded. And it’s going to happen BIG because of all our current backers. To each of you backing this project: a heartfelt thank you!

But, this isn’t over yet. The casting time has not ended.

Within sight, we have the stars aligning just so, allowing us to provide you with a potential Triple Star Magic stretch goal. This goal will give backers even MORE magic to add to their Pathfinder game, some more excellent gaming content (adding the Complete Advanced Feats PDF and Might of the Magus PDFs), and an introduction by a mysterious cloaked figure (contract completion allowing!).

After that, you’ll see that Ioun Magic spells, written by Creighton Broadhurst, are another available stretch goal. Creighton is well-known for his role as designer and publisher at Raging Swan.

And if you look a little bit farther down the Kickstarter page, you’ll see that, yes, there is the potential for Kobold Magic and even an Adventure Path (!!!). Plus, well, there’s The Hat. And Wolfgang. Wearing it. While being recorded talking about his first Archmage NPC in a D&D game. Come on. We HAVE to see this one.

We might even have some new cool art announcements, but it’s too soon to say. Hang tight!

Scroll even farther down the Kickstarter page and you’ll see all the cool add-ons that you could snag while you’re backing this now rather extensive and magically awesome project.

So, again, if you are already a backer: THANK YOU and welcome to the magical adventure! If you haven’t become one yet, we have a LOT to offer you in the Deep Magic Kickstarter.

Come on. The Hat. And Kobold Magic! And the Adventure Path! And mysterious figures writing introductions. This must happen. ;-)