Skip to content
Home / Delve into the Depths in the Kobold Blog / Lethal Lairs Finalist: Monument to the Thunderer

Welcome to the first of the Lethal Lairs finalists, which are presented in no particular order. Our esteemed judges have enjoyed going through each of the entries for this contest, and now you can read each of the five they chose as finalists! After we present all five — unedited — you’ll have a chance to vote for your favorite. Thanks go to both our entrants and our judges for their work! And now, finalist James J. Haeck presents you with “Monument to the Thunderer” — enjoy!

Near the city-state of Makuria, on a small island in the middle of the Green Nuria River, a stone dragon watches over the mighty Red Cliffs and the waterfall that pours over them. The monument was built by ancient worshipers of the Mharoti conqueror Zulatil the Thunderer, but now serves as a base of operations for the Red Cliff Raiders.

Red Cliff Raiders. One year ago, a band of Nurian mercenaries were captured by a power-hungry Mharoti half-blue dragon mage named Zahiil and swore fealty in exchange for their lives. The half-dragon agreed to spare them on one condition: that they bring him a titan’s divine spark by any means necessary. Under Zahiil’s command, the ex-mercenaries grew rich and feared by raiding caravans and adventurers en route to Nuria. Now known as the Red Cliff Raiders, they ambush their targets on wyvernback, swooping upon them from the top of the towering Red Cliffs.

The Raiders have just scored an incredible victory. While scouring the desert near Siwal, their wyvern scouts attacked a group of adventurers transporting a chest, glowing with internal light, across the wastes. The thieves plundered the treasure and fled. On their return, Zahiil identified the glowing orb within as the divine spark which he had been searching for, and attempted to absorb its power. The integration failed disastrously. Zahiil now secretly suffers from a terrible curse for his failure. He hopes to successfully absorb the spark and eliminate the Raiders before they learn of his weakness, but his meditations are interrupted by the PCs’ arrival. 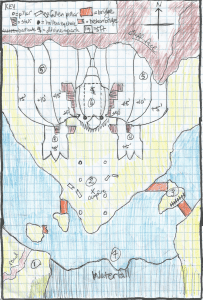 Monument to the Thunderer

One of the mighty River Nuria’s tributaries, the Green Nuria is rapid and unforgiving to those caught in its waters. Any creature who enters a space completely filled with water for the first time on their turn or begins their turn in one must make a DC 15 Strength (Athletics) check or be swept 15 feet towards the edge of the waterfall (see Area 7). Succeeding on this check allows the creature to swim against the current, treating the river as difficult terrain.

Four thugs, two bandits, and a berserker are on guard duty here, but have circled around a cooking fire and taken a break to eat. Their pet death dog, a mangy beast named Twofy, snaps up the scraps they throw him. The thugs and bandits attempt to frighten intruders away, then attack with crossbows and alert the wyvern riders in Area 5. They do not attempt to ford the river, instead attacking at range until the characters make it across. The berserker is spoiling for a fight, and charges the characters as soon as they begin crossing the river.

Pillars. The thugs and bandits shoot from behind the standing pillars, gaining one-half cover against attacks from the other side. A prone character gains three-quarters cover when behind a fallen pillar.

When the Red Cliff Raiders were simple mercenaries, a trollkin veteran named Garlin was their leader. Now Zahiil’s servant, she is dozing at her post, but awakens as soon as a wyvern snatches a player character (see Area 5). Garlin is ugly and misshapen, but she is unusually canny and courageous. She wields a heavy crossbow and keeps watch over the eastern road from behind a barricade made of pointed sticks and spears.

Betrayal. Garlin holds little love for Zahiil and considers him an arrogant, condescending lout. She plans to murder him and make off with the gold he has been hoarding, and sees the chaos caused by the PCs’ arrival as the perfect opportunity to strike. She does not attack adjacent characters, but instead asks for their help in defeating Zahiil, offering the party half of the gold hidden in his lair.

Two prisoners are tied up on the dragon monument’s claws, one on the eastern claw and one on the western. Victims of a previous raid, these prisoners are wealthy merchants who, if rescued, may hire the PCs to take them back to their home cities. A total of four thugs watch over the prisoners.

A group of knights (equipped with lances instead of greatswords) sit atop the dragon monument’s colossal wings, tending to their wyvern mounts. There are a number of knights and wyverns equal to half the number of characters in the party, rounding up. When alerted by the Raiders in Area 2, the wyvern riders spend their first turn picking up weapons, setting down food, and putting on helmets.

On their next turn, the knights spend their movement mounting their wyverns, which immediately fly towards the PCs. When in range, one knight uses her action to command their mount to snatch one of the characters in its claws and hurl them over the waterfall. The other wyvern riders use hit-and-run tactics to harry the characters on the ground. The Raiders only attempt to throw one character over the waterfall at a time.

The wyverns do not attack independently of the knights, and flee if their riders are killed. The Raiders have trained their mounts to snatch people and objects from the ground, both to drop enemies from the sky and to steal cargo from caravans and adventurers. While mounted, a knight may use an action to command her wyvern to snatch a creature using the Attack action. The first wyvern to successfully grapple a creature lets out a triumphant shriek, waking the trollkin Garlin in Area 3.

Snatch. Melee Weapon Attack: +7 to hit, reach 5 ft., one creature. Hit: 13 (2d8 + 4) piercing damage. The target must make a Strength (Athletics) or Dexterity (Acrobatics) check opposed by the wyvern’s Strength check or be grappled in the wyvern’s claws. The target’s check automatically succeeds if it is Large size or larger. A released creature falls straight down at a speed of 60 feet per turn.

If a wyvern’s rider is killed or unseated, a PC who mounts the wyvern may make a DC 15 Wisdom (Animal Handling) check as an action to command the wyvern to fly in a specific direction; if the check fails, the wyvern acts independently until the rider’s next turn. After two successes, the wyvern obeys the rider’s commands unerringly for the next hour, or until it takes damage or the rider dismounts.

Platforms. The stone wings of the dragon monument are platforms leading to the monument’s head. Each “bone” in the stone wing increases the elevation of the wing, with the lowest tier 5 feet above the ground, the middle tier 10 feet above, and the top tier 15 feet above. A character may make a DC 10 Strength (Athletics) check as an action to climb to the next tier.

A staircase representing the monument’s ear frills leads to its hollow eyes, each 5 feet tall.

Using transmute rock, the half-blue dragon mage Zahiil created a rectangular room 10 feet wide by 20 feet long inside the dragon’s head. In the back of the room is a stone pedestal, upon which rests a glowing orb of light: the divine spark. Piled around this pedestal is a heap of gold and jewels; 300 cp, 216 sp, 527 gp, and ten tiny sapphires each worth 30 gp. Zahiil tried and failed to integrate the divine spark into his body, and is suffering from a permanent curse for his failure; at the start of each of his turns, he must make a DC 16 Wisdom saving throw or waste his action that turn doing nothing.

Tactics. Zahiil realizes on the third round of combat that his lair is under attack. He ceases his meditations and emerges from the dragon’s head to cast a spell, then retreats inside until his next turn.

The Green Nuria River, named for the foliage that grows around its banks, tumbles over the Red Cliffs into a river valley 50 feet below. Any creature that falls over the waterfall may make a DC 17 Dexterity saving throw to grab vines at the edge of the cliff and avoid falling. On a success, the creature is able to hang on to the cliff, and takes falling damage equal to how far it fell before catching itself. On a failure, the creature falls, but is caught 20 feet from the ground by the thick vines growing in the water and takes falling damage equal to the distance it fell. If the save fails by 5 or more, the creature falls to the bottom of the valley.

Any creature that begins its turn underneath the waterfall takes 1d6 bludgeoning damage and must succeed on a DC 8 Strength saving throw or lose their grip and fall.

5 thoughts on “Lethal Lairs Finalist: Monument to the Thunderer”