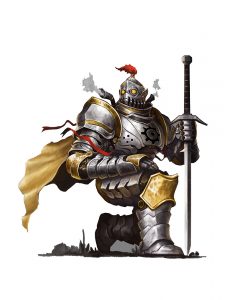 If you’re curious as to what you can build using the new Midgard Heroes 5e supplement, take a look at our second sample fifth edition character.

I finish anything I set my hand to. Half measures never produce quality results.

There’s always a correct tool for any job in life. It’s just a matter of finding it.

Generosity. I am always willing to use my skill to help the needy, even at cost to myself. (Good)

There is something great behind my skill, and I won’t rest until I learn the truth of its origins.

I put too much trust in my own skill, especially in areas other than my craft.

Other Proficiencies and Languages

Blessings of Knowledge. Proficiency in Arcana and History, double proficiency bonus on those skills (marked with *).

Background Feature — Masterwork. When using the crafting downtime activity rules with your chosen craft, you generate double the normal progress toward the item’s completion (anyone assisting you provides the normal bonus). You must create at least one item at the normal rate before this feature can be used to create another item at the accelerated rate.

Constructed Body. Your consciousness and soul reside within a soul gem to animate your mechanical body. As such, you are a living creature with some of the benefits and drawbacks of a construct.

Flesh of Steel. You are immune to disease, poison damage, and the poisoned condition.

Temper is a gearforged of artful design. His steel skin-plates sport an array of colors that fade one into the other, from a faint golden straw, to a rich metallic blue. Intricate designs are etched into the plates, and his eyes gleam a flickering sapphire through their enchanted lenses.

Temper’s true name is hidden away, and his origin is known to few. Once he was a bloodthirsty human warlord. He sought to steal the secrets of creating powerful weapons forged of both steel and magic from the vaults of Rava’s priesthood. His campaign was a dismal failure, but instead of being killed, the priests of Rava took him prisoner at the behest of the clockwork goddess. When Temper emerged from the ritual of soulforging, he was a changed being in all ways. Some whisper that he spoke to Rava herself during his soulforging, and that the goddess has set him upon a great task that will shake the foundations of Midgard.