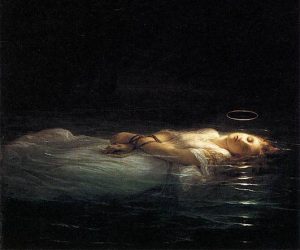 Mida gasped and let out a shriek that chased the crows from the treetops.

“Give her back, you hobgoblin!”

Icarus scurried to the edge of the well and dangled the doll over the abyss by its horsetail hair. A smile marred by gaps—teeth yet to emerge – spread across Icarus’s face…

“Little Mida’s a great dancer, yeah? Little Mida floats on the air like a hummingbird!”

Icarus clambered up on the lip of the well.

“I wonder if there’s snakes down there. Does Little Mida like snakes?”

Mida wiped her eyes in silence, yards away.

“It looks dark down there. I think Little Mida needs a torch!”

Producing a flint from his pocket, Icarus struck it against the stone, setting the doll’s layered purple dress aflame.

With a chuckle, Icarus pitched Little Mida into the well.

A faint pop. A loud crack. A muted splash.

“You ogre! I’m telling mother—you aren’t supposed to be playing by the well anyway!” Mida burst into heavy sobs, spun ‘round, and scampered back up the path. Icarus’s derisive laughter reverberated down the moss-coated shaft.

Icarus dusted his hands and leaned back over the mouth of the well.

“I hope you can swim, Little Mida!” he called.

Then, something glittered in the dripping darkness below while low grey clouds roiled overhead, casting deep shadows that swam along the crabgrass.

It was a silver coin—a wish, perhaps—that had by chance settled on an inch of protruding brick just within arm’s reach. Embers from Little Mida’s dress still wafted down the chute.

Icarus lay flat across the rim of the well, both arms outstretched toward the shilling. Rain began to tumble from the sky, but Icarus was undeterred, his fingers brushing against the ridges of the coin.

In an instant, Icarus lost his balance.

In an instant, his ribs bounced against the lip of rain-slicked well.

In an instant, his head knocked the water bucket from its pinion.

Face first, he plunged. Down, down, down.

A faint pop. A loud crack. A muted splash.

The priest stopped offering the warrior porridge, water, and wine days ago. Though he would not eat, the fighter had lost none of his appetite for storytelling.

“I don’t know how far we ran—not far enough, I say, since we could still hear the damned ghouls retching—but after a time our retreat ended at the foot of a heavy iron door.”

The fighter wheezed and clutched his bed sheets. Thin azure veins bulged against the graying skin of his neck.

Church bells in the distance tolled eleven. The rumbling of thunder across the cathedral walls twisted the melody into dissonant aural knots.

“Rust was falling off the door in sheets, leaving a pile of dark red flakes on the ground. Huge bolts fixed it in place. If it weren’t for the handle, I’d have guessed you couldn’t open it.” A trembling hand slithered out from beneath the covers. With two fingers bent, he gestured toward an invisible ally.

“Jakar managed to get the handle unstuck, and with a heave he opened it—”

The fighter waited for the bells to stop ringing the “Hymn of Radiance.”

“All we saw was an empty square room with stained walls. Jakar went first, followed by Nessa and Tolsante.  I stayed in back—call it a hunch.”

“The last sound I’d heard was a noise like a rusty grate swinging open. Next thing I knew, we were shield-deep in this gritty red water. The iron door started closing—sealing us in. I was in the back, so I jumped out. Almost lost a leg to that devilry.”

“What happened to your friends?”

“They died. All three of ‘em. Drowned, right there in that square deathtrap.”

“I’m sorry, Gerard. There’s no doubt your quest was honorable.”

The fighter managed a scowl.

“I ran back to town and gathered the best men-at-arms I could find. Come Providence, I was going to give my comrades a proper burial. I wasn’t going to let the Iron Lich take them like that.”

“It took us 5 or 6 days, but we made it back down into the catacomb and pried that damned door open. The water drained out into the corridor, almost swept us away. “Drip, drip,” that’s all we could hear inside. Jakar, Nessa, Tolsante—they just laid there on the stone floor, soaked, pale, and bruised.”

“And where did you bury them, Gerard?”

“Nowhere. Absolutely nowhere. My men and I tried to pick them up and carry them, but something was wrong. Their skin… something happened to their skin. It was thin and spotted, and I could see their insides through it. We tried to lift them off the floor, but their flesh slid clean off, like tender meat from the bone of a roasted pig on Founder’s Day.”

Gerard winced and shifted in his bed.

“Then I heard Lorien scream. Tolsante, his flesh… it was crawling. By the gods, by each and every one of the gods, his skin was crawling. I remember Lorien’s cries—it was tearing him. Before we could draw our swords, the skin of the others had already pinned two bloody masses to the floor. Jakar—his shell—clawed at my greaves, but I’d already begun my retreat. I stayed in back. Call it a hunch.”

Gerard winced again and let out a strained hiss.

“Are you alright, Sir Gerard?” The priest rose to his feet, fingers wrapped around his holy symbol.

Once a silky mold of clay upon which the gods chiseled breathtaking features in their likeness, the passing of the soul leaves our mortal forms little more than an emaciated husk. The blood in our veins settles into bruised pools, our airless cavities sink into worm-eaten muscle, and our skin—desiccated, like parchment—cracks and shrivels, revealing brittle fingernails, stringy hair, and yellowed molars.

Verily, the only beauty in death is that which is left by the mortician’s brush.

A creature that dies while submerged in a relatively closed body of water endures an ever more harrowing decay. A morass of bodily fluids, now little more than poison, obeys gravity and biology and pushes itself free of the corpse, seeping through any and every orifice and pore. The water surrounding the body becomes ruddy and viscous—a veritable human “soup”—and the flesh still adhering to the corpse continually absorbs, sheds, and re-absorbs the excrement, causing it to become loose and gelatinous. In time, the skin pulls itself free, and all that remains is a jumble of bones floating amid a noxious pool of gore.

In certain conditions—damp climate, pervasive necromantic magic, or a particularly wicked victim—the tainted sludge takes on a much more potent, menacing nature, inflicting upon adventurers in mere moments the bloated organs and membranous flesh of the decayed bodies that had fermented the soupy mess. This grotesque hazard, termed “cannibal’s lutefisk” by veteran dungeoneers, is known as sloughing ichor.

A pool of viscous, crimson liquid rises to your chest. Your innards balloon to the surface of your body and your flesh grows thin and membranous, threatening to slide off like an ill-fitted disguise.

Hazard A deep pool of necrotic fluid fills a 5×5 square area of a chamber (or a 5×5 square chamber). The skin of living creatures submerged in the liquid becomes porous and translucent before ultimately molting off. Squares filled with sloughing ichor are treated as difficult terrain. If the hazard is especially deep, the GM may treat it as challenging terrain (see Dungeon Master’s Guide).

No check is needed to notice a pool of sloughing ichor.

◊ DC 22 + 1/2 hazard level—Your knowledge grants you and your allies a +2 bonus to saving throws made versus the hazard’s effect.

Trigger When a living creature enters or starts its turn in a square filled with sloughing ichor, the hazard attacks.

Countermeasures
◊ If you’re wearing heavy armor, you gain a +5 bonus to Fortitude against the hazard’s attack.
◊ With a minor action and a DC 17 + 1/2 hazard level Endurance check, you may render yourself immune to the hazard until the start of your next turn.
◊ Living constructs and oozes are not affected by the hazard.

Sloughing ichor is most commonly encountered as either a pestilence or a by-product of a trap (most notably, those that flood a chamber with water).

In the first instance, one or many corpses decompose in an important source of freshwater, such as a well or fishing pond. The putrefied skin and visceral fluid contaminate the water; those that swim in, drink from, or eat food exposed to it come down with a fever that quickly develops into sloughing ichor disease (see below). While this disease is not contagious, it often is pandemic in smaller cities and hamlets that depend on a single water source.

Regions devastated by floods are awash with sloughing ichor. Beyond the abundance of dead creatures moldering in the floodwaters, sloughing ichor attracts swarms of mosquitoes that transmit the disease through their bites. Worse still, animals washed away in the ichor rise again as swarms of tiny forsaken shells that quickly overwhelm livestock and helpless peasants (see sloughing ichor disease, below).

In other cases, however, creatures come into contact with sloughing ichor in dungeon chambers warded by water traps. Water traps, for instance, often re-use the same reservoir of water each time they are triggered; over time, it becomes tainted by the putrid remains of entire groups of drowned adventurers. Less sophisticated water traps that must be manually reset are among the most threatening, as bodies may fester for weeks, months, or even years.

Worshippers of Amut, the Eater of Filth—gluttons, bizarre fetishists, and deranged pharaohs—claim that sloughing ichor is a blessing sent by Her Ravenous to “cleanse” the land of those prone to disease. Those who still perform her long-forgotten purification rituals imbibe sloughing ichor culled from a sacrificial victim left to putrefy in a sarcophagus filled with holy water.

Malevolent aquatic creatures, aboleths in particular, have grown accustomed to sloughing ichor as a feature of their waterlogged lairs, adapting it to sicken intruders or hinder enemies in combat. Some of them are rumored to cultivate ichor bogs, or pools of thick water where the bodies of numerous slain dungeoneers are left to congeal. The purpose of such reservoirs is, as of yet, unguessed.

Races that practice torture, principally dark elves and devils, keep vats of sloughing ichor in their dungeons. Victims are dipped into these vats before being tormented, the ichor leaving their flesh highly sensitive to pain. After the victims have perished, their flayed bodies and folded skin are stirred into the vat, renewing and thickening the substance. Especially cruel torturers fix glass windows into the sides of these vats, affording them the perverse luxury of watching their victim’s bruised skin slide off.

Your skin grows ever more pallid and translucent, sliding off in chafed, putrefied sheets. A sanguine trail follows you, and attacks pass into your vitals through the remnants of your flesh with ease.

< Initial Effect You gain vulnerable 2 all and take an extra 5 damage per tier from critical hits.

<> You gain vulnerable 2 all and take an extra 10 damage per tier from critical hits. In addition, creatures that hunt their prey by scent gain a +5 bonus to Perception checks made to track or detect you.

<> As above, and you fall prone and cannot stand. You are perceived as undead by other undead creatures and are subject to effects that command, rebuke, or turn undead.

> Final State You die and rise again as a forsaken shell (level 6 skirmisher; Open Grave) in 4d6 hours. If the Raise Dead ritual is cast on the bones left behind, you rise as a skinwalker skeleton (level 2 brute; Open Grave).