Skip to content
Home / Delve into the Depths in the Kobold Blog / Trapmaster: The Empty Shelf 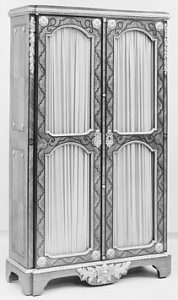 Setting the heavy tome in place, Mira thought to herself, “These sages need to get out more. I am bored just looking at these books. I would rather eat sawdust than read them. They are probably drier…”

Indeed, the bookshelves mask the seams in the pivoting section of wall ahead, but the tiny scrape marks in the floor give it away. Opening the panel is another issue. Attempts to manipulate the pivot seem impossible, and a thorough investigation reveals no trigger or switch. In fact, the only odd thing about the secret door is the empty shelf in the middle of the rotating panel: the remainder of the bookshelves in the room are filled with volumes, tomes, scroll tubes, and even the occasional kick-knack or objet d’art.

After further investigation of the bookshelves, the PCs identify nine volumes marked with the same personal sigil. Though the bindings and thickness of each book vary, all nine contain an inscribed book plate on the inside front cover. In an archaic form of common, the inscription reads:

By threes the letters of these noble books fill the emptiness with knowledge.

The titles of the books are as follows: 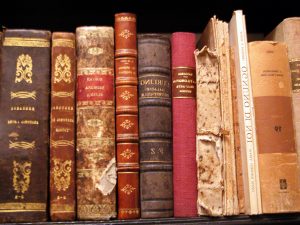 Unlocking the pivot requires placing the books in the correct order on the shelf, spelling out the word knowledge using the third, sixth, ninth, twelfth (and so on) letter from each title (“By threes…”). The correct order is 9, 3, 2, 1, 4, 8, 7, 5, 6. The incorrect order triggers the trap when the final tome is placed. Darts fashioned as ink pens strike a target in front of the empty shelf, delivering a poison that saps strength and causes partial blindness as the eyes glaze over with an inky film. While the trigger of the trap is easy to spot, the dozens of loaded dart tubes disguised in the books and scroll tubes filling the room’s shelves are likely too well-hidden to find in their entirety. The trap rearms itself when the books are shuffled for additional attempts. Physical damage to the empty shelf or pivoting panel causes the trap to fire two additional darts each cycle; these targets are determined randomly anywhere in the room.

Excellent engineering or perception skills reveal a scale worked into the empty shelf, suggesting the books must be placed in a certain order to balance correctly. All variations are so closely balanced, the exact sequence cannot be determined by weight.

After the first triggering of the trap (or if the PCs are completely stumped), a linguistics check suggests a better translation of the book plate clue:

By threes the letters of these titles fill the emptiness with knowledge.

Initial Investigation: It takes 20 minutes to discover the nine marked volumes. A DC 15 Linguistics check cuts this time in half; detect magic causes the arcane marks to glow: the books can be collected in one minute (including the casting time of the spell).

Finding the Scale: A DC 15 Perception check or DC 13 Knowledge (engineering) check discovers the scale built into the shelf.

Ancient Languages: A DC 15 Linguistics check translates the clue more literally; reduce this DC by 5 after every incorrect sequencing of the books.

Halving the search for the nine marked tomes to 10 minutes requires a DC 15 Intelligence (investigation) check; an active detect magic reveals them in one minute. Finding the scale in the stone shelf is accomplished with a DC 10 Intelligence (investigation) or Perception checks respectively – exceeding the DC by 5 reveals the trap. Disarming the trap is a DC 30 check; it takes 30 minutes to find all the tubes. The darts strike with a +6 ranged attack and deal 1d3 damage plus 6 ongoing poison damage for 3 rounds (DC 12 Constitution halves). A character who takes 8 points of poison damage must make a DC 12 Constitution save or be blinded for 1d3 hours. Succeeding at a more literal translation requires a DC 15 Intelligence (investigation) check; grant advantage after one failed check.

Speeding through the 20-minute search for the nine tomes in half the time is accomplished as a Normal task; a character with the arcane mark cantrip or similar magic finds them in one minute. The scale in the shelf is discovered with a Normal check, as is the knowledge that the panel is trapped. Disarming the trap is Ridiculously Hard. The darts are +5 vs. PD and deal 1d3 damage plus 5 ongoing poison damage (per Tier) for up to 4 rounds. A character who takes 10 or more points (per Tier) of poison damage in a 10-minute period without treatment must make a Hard Save or be blinded for 1 hour for every 5 points (per Tier) of poison damage. Unravelling the more literal translation is a Normal Check.

It takes 20 minutes to discover the nine volumes; a 3rd level thief finds them in half the time. Read magic or read languages finds them in a minute. A dwarf discovers the scale (and trap trigger) in the stone shelf on a 4 in 6, as does a delicate tasks and traps check. The literal translation is automatically revealed if magic was used to locate the nine books after the trap fires once, otherwise a 3d6 intelligence check (reduced by 1 die every time the trap triggers) suffices. A delicate tasks and traps check halves the attack bonus on the darts, which is normally +6. The darts deal 1d3 points of damage and require a poison save to avoid blindness for 1d6 hours. Additional doses of poison extend the duration of the blindness.