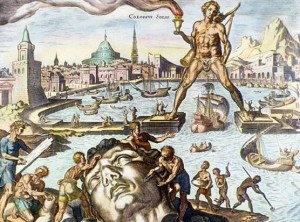 The earth beneath you shakes, heralding the approach of a massive construct. It wields a greatsword the size of a castle tower and shifts as if the metal it were made of had a life of its own.

The Centurion is a unique construct, crafted by twisted, genius artificers. On first inspection, it’s a mere iron golem, but the Centurion was given free will and the ability to repair and modify its body by collecting scrap metal.

SPECIAL ABILITIES
Break Apart (Ex) When destroyed (or at its whim), the Centurion sheds its shell of metal debris and reverts to a CR 13 Iron Golem (see Pathfinder Roleplaying Game Bestiary). Unless this form is melted down, buried, or destroyed completely, the Centurion fully rebuilds itself in 1d6 weeks.

Immunity to Magic (Ex) The Centurion is immune to spells and spell-like abilities that allow spell resistance. Certain spells and effects function differently as noted:

Magnet (Su) Every 1d4+2 rounds, the Centurion’s magnetic aura pulses stronger and pulls anything metallic within a 120 ft. radius to its body. Characters must make a Strength check (DC 17) to hold onto metallic weapons or shields in hand. If the check fails, these items are pulled to and attach to the Centurion’s body. They can be retrieved with a Strength check (DC 22), which provokes an attack of opportunity.

Animated objects from its spawn objects ability caught in the aura are immediately pulled into the Centurion.

Utilized as a war machine, the Centurion thrived on the battlefield, growing larger with every battle. It eventually lost control, growing to a massive size and feeding on the dropped armaments of its victims. With a higher intelligence and insatiable hunger, the Centurion stalks the battlefields of the world.

It stands 36 ft. tall, weighs about 80,000 lb, and resembles a heavily armored knight. On close inspection, one can make out the thousands of sets of armor, weapons, and shields that make up the surface of the construct.

Outside of combat, the Centurion utilizes its break apart ability to wander the world as a simple iron golem. When it hears of a looming conflict, it wades into the battle once more.

The Centurion is supremely confident in its abilities and walks into battle wielding its greatsword made of animated weapons. It always strikes as many opponents as it can per round and unleashes its magnet ability to draw opponents in closer so it can fully maximize damage using Great Cleave. If a character is unaffected by the magnet ability, the Centurion targets them and commands its animated spawn to eliminate them first.