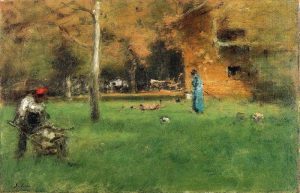 Travelers taking the road to Hirschberg out of Salzbach might be mindful of the goddess Ceres’s fickle nature, should they seek refuge or rest at Wicker’s Tithe Barn. The scythe the harvest goddess wields cuts two ways. Sowers and herdsfolk who are industrious and attentive often reap a bountiful harvest, true enough, but she also culls the community of slothful and unproductive elements.

Travelers on foot usually come upon the tithe barn a day or so after the road turns north at the River Salva, a tributary that runs parallel to the trail until both converge on the River Rhogarn at Hirschberg.

Basically a slate-roofed two-story longhouse with walls of native flagstone, the tithe barn has two wings extending out from a central block. Sturdy, it looks like it can withstand nearly any tempest. Area farmers, all followers of Ceres at various levels of devotion, provide a portion of harvest or make donations from the sale of their goods.

Double doors at the end of the south wing reveal a stable and storage room of implements used cooperatively by area farmers. The north wing is the granary. Two basement levels cut from the native limestone serve as cellars to keep produce fresh and preserve seed for the next growing season.

The central hub contains a common room with a small fireplace. Stairs lead to a balconied second floor, which contains a single office, reserved for the barn’s overseer, and a small chapel. Contributors to the barn are always welcome to stay the night or seek shelter in a storm. Travelers must drop a coin for each person, mount, and beast of burden in their party into the offering box. The value of the coin should reflect that character’s status (copper for 0-4, silver 5-8, gold for 9+, Midgard Campaign Setting, p. 24) or else risk receiving Ceres’s misfortune.

Tochias Wicker, a human male in his fifties, manages the tithe barn on behalf of the church of Ceres. Strong in arm and body, Tochias is never without his wide-brimmed straw hat. Though he refers to himself as a simple farmer, in truth, he has extensive holdings nearby where he and his family of nine raise cattle, sheep, and barley; orchards that produce apples and pears; and a vineyard devoted to assorted berries and grapes.

In most things, Tochias is generous and fair-minded. He will not tolerate disrespect nor the utterance of obscenities from persons of any status. Those who persist after a warning are evicted from the grounds.

The temple of Ceres in Hirschberg assigns four initiates to the tithe barn for a year of service. Usually, there are two pairs, male and female. When the initiates aren’t managing the barn, they are laboring on Wicker’s farm, where he has a small cottage set aside for their use.

Although the tithe barn is within Hirschberg’s domain, the church directs Wicker and the initiates to take harvest goods to the Redleaf trade fair in Salzbach for sale, with the proceeds going to the church.

Devotees of the Reaper

In these lean times, the cult of Ceres the Reaper has gained followers in the region. With each full moon, the cultists will form gangs and roam the countryside seeking a likely human sacrifice. Tochias considers any travelers within the tithe barn (or on his farm) under his protection, but he does not intercede for anyone else, deeming it the will of Ceres. But the gangs become more brazen each month, and twice this year he’s had to bar the doors to the barn to stop their entry. He is considering bringing his entire household to the barn during the next moon.