Skip to content
Home / Delve into the Depths in the Kobold Blog / Krampus Christmas Carnival: Enter the Krampus! (Part 2 of 3) 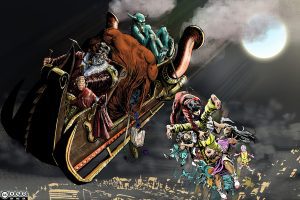 The dark cohort of old St. Nick, the Krampus is the sinister creature tasked with punishing the little boys and girls who fail to listen to their parents throughout the year. Presented here for your holiday entertainment, we’re providing you with a collection of Krampuses, a bundle of badness who are intent on leaving behind lumps of coal and teaching a few fear-inspired lessons for a trio of game systems! So, tell your players to be good, lest the Krampus come into play while on their watch!

The second Krampus in our collection waits for you within the 4th Edition system. 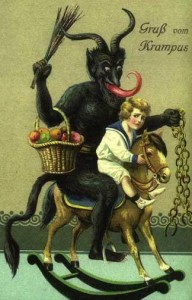 “Use your best judgment when deciding how to sunder the Krampus’s bag. I know it’s atypical for 4th edition stat blocks to contain narrative elements, but I hope DM’s will have fun adjudicating them! Happy Holidays!“


TRAITS
Discordant Jingle (fear) • Aura 3
Enemies take a –2 penalty to Perception checks and a –penalty to Will while in the aura. Krampus typically does not activate this aura until after entering combat.

Naughty List
Krampus receives a +2 bonus to attack rolls, and he deals 1d6 extra fire and cold damage to any creatures who have partaken in evil or mischievous acts in the past month. In addition, until Krampus makes its first attack, it is invisible to those who are pure of heart.

Sense Children
Krampus knows the locations of all children, and those who are young at heart, within 50 squares of it, even if it can’t see them.

[m] Snatch & Stow (psychic, weapon) • At-Will
Attack: Melee 1 (one creature); + 12 vs. Reflex
Hit: 5 damage, and the target is grabbed and restrained within Krampus’s bag (escape DC 17). The target can make only melee or close attacks, and it has line of effect and line of sight only to Krampus.
First Failed Saving Throw: The target  takes 10 psychic damage and takes a –2 penalty to attack rolls until the end of the encounter.
Second Failed Saving Throw: The target is lost in Krampus’s bag and is removed from play either until Krampus is slain or his bag is destroyed.
Aftereffect: The target is covered in a mix of vile bits of sinew, blood, and Small animated biting toys.

TRIGGERED ACTIONS
Infernal Jaunt (fire, teleportation) • At-Will
Trigger: Krampus captures a creature in his bag.
Effect (Free Action): Krampus teleports up to 7 squares and deals 5 cold and fire damage to each adjacent enemy at the start and end of this movement. Additionally, Krampus gains partial concealment until the start of its next turn.

Watch for part 3 of our Krampus Christmas Carnival this week, plus check out part 1! And for more entries from a slew of other folk participating in the carnival, please visit the Nevermet Press site. Information about the Krampus Carnival: The “Steampunk Santa with Krampus” artwork by Steven Austin and Nevermet Press is licensed under Creative Commons.

8 thoughts on “Krampus Christmas Carnival: Enter the Krampus! (Part 2 of 3)”