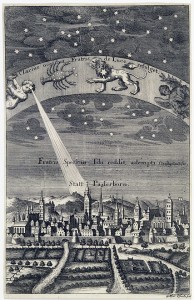 School of the Stars

To be perfectly honest, there’s only so much traveling you can do when you spend most of each night staring up at the sky. The School of the Stars is a relatively small group of magic-users whose primary goal is to better understand the skies above, including predicting events that will happen in the future. The divination is a bit of a sideline, because their dedication is such that they have also produced some of the world’s most accurate maps of the stars . . . and these maps have been used for navigation by more than a few people. Members of the School of the Stars have been known to cast spells over entire cities to darken the lights from below and allow easier vision of the skies above; this generally happens once a week or so, except on special occasions, and the citizens (fully informed as to what’s going on) have mostly learned to deal with it. Some members of the School of the Stars go on journeys to observe the sky from different areas of the world, and they may seek to hire adventurers (and contribute their modest magical talents) to get to their next destination.

The Brotherhood of the Brightshadows

The Brotherhood of the Brightshadows, despite its name, accepts women. It’s a bit of an embarrassing story, so they don’t particularly like to talk about why. But these illusionists have always felt that too much in any one direction can be dangerous, and as such they recruit only from the neutral alignments. Brightshadows focus on a mixture of light and darkness in their casting; one moment they may be veiling their enemies with the deepest darkness, and the next they may be piercing their enemies’ eyes with the radiant power of the sun. They’re often wild and unpredictable when roused to combat, but they do like to use their powers to remind others that darkness can lurk in the hearts of good, and even those truly evil may still have the capacity for something better. Not quite saints, not quite sinners, but definitely masters of unexpected actions.

Rarely known by this particular name except by very bored people who have nothing better to do with their time, the Constellations are the most powerful astromancers on a particular world. Each specializes in the overall field of magic, but has learned a variety of spells to supplement the constellation they’re affiliated with. A Constellation astromancer linked to stars representing justice, for example, might look for magic designed to discern truth from lies and track down the guilty. How they behave is strictly up to them, but most astromancers look up to the named ones and might even seek to learn from them.

Lay of the Land (General)

Your knowledge of the stars tells you precisely where you are.

Benefit: As long as you are familiar with the skies and maps of a world, you can determine your position in the world (to an accuracy level of 1 mile) simply by looking at the stars.

Your many years of experience with light and darkness have allowed you to acclimate yourself to sudden changes.

Benefit: Whenever there is a sudden change in lighting, you may make a Perception check to remember where major things were before the change. You gain a +5 bonus to the check, but the difficulty of the check increases by 5 for each major thing beyond the first that you attempt to recall. You are never surprised or flat-footed as a result of sudden changes in lighting.

Your dedication to a particular theme enhances the power of your magic.

Benefit: All spells related to the theme of your constellation (as judged by the GM) gain a +1 bonus to overcoming spell resistance.