Skip to content
Home / Delve into the Depths in the Kobold Blog / KotM2 Fight! Palaver 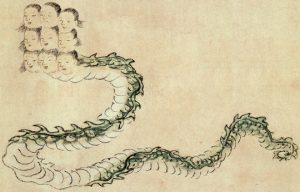 Welcome to the King of the Monsters 2 finals (see the list of finalists): the palaver is random finalist 2 of 10. These submissions are left almost entirely as they were received with the exceptions that all submissions are posted with an image and are standardized to KoboldQuarterly.com style. Let the fight commence!

This pale snake has three heads and three human faces, each a mask of sincerity. Its breath reeks of manure.

Palaver are pathetic demons formed from the souls of shameless flatterers; evil courtiers, self-serving advisors, and vile bureaucrats. Their powers are dangerous to mortals, yet useless before other fiends, who find their eloquent pleas for mercy hilarious. They cower in great pools of boiling excrement, hoping for some mischievous glabrezu or hapless summoner to pluck them out and whisk them away to the material plane, where their forked tongues might hold sway over living hearts once more…

TACTICS
Before Combat Palaver can rarely resist coaxing friendly creatures into combat. If uncertain of the outcome, they will watch the battle from hiding (fully prepared to bemoan their cowardice later on).

During Combat A palaver leaps at the chance to bore deeper into a mortal’s psyche by offering “assistance” in battle. It tries to stay behind allies but bares its fangs to defend itself.

Morale A palaver flees as soon as it is alone or injured. If it can, it tries to switch sides in a losing battle, using its powers to benefit its foes.

SPECIAL ABILITIES
Fiendish Appeal (Su) As a standard action, a palaver may beseech an adjacent creature with persuasion and praise, combined with vigorous undulations meant to approximate some sort of bowing. This effect, which varies depending on which head is speaking, can be resisted with a DC 16 Will save (but remember that any creature can fail a save voluntarily). All are mind-affecting, language-dependant compulsions and work only on mortal humanoids.

Flattery—The first head heaps extravagant praise upon the subject’s virtues, providing a +4 morale bonus to one ability score for 1 round (or longer, if the palaver keeps using this ability). However, once the flattery stops the target not only loses this bonus but takes 4 points of ability damage to that score.

Ill Council—Murmuring what seems like profound advice, the second head convinces its target to attempt a specific action. This works like the suggestion spell, except that the effect lasts only one round, and the target also gains a +2 morale bonus to any d20 rolls made in pursuit of that action.

Lies—Weeping, groveling, and swearing loyalty, the third head convinces a hostile target to spare its pitiful existence (treat this as a sanctuary effect).

Insidious Tongues (Sp) Any creature who fails 10 consecutive saves against the palaver’s fiendish appeal ability becomes charmed, as the spell charm person. This effect lasts until dispelled or until the palaver is destroyed.

Once on the material plane, a palaver seeks the trust and pity of mortals. When faced with an educated mind, it does not deny its abyssal origins; in fact, it describes how horrible the lower planes are, and how wonderful it is to be back in the presence of the glorious living. They portray themselves as victims, damned through elaborate accident and tragedy, and if that doesn’t work, they confess their deceitful nature and howl for forgiveness. They are the most craven of liars, blubbering and apologizing profusely for falsehoods abandoned even as they invent fresh ones to take their place.

Once in a position of such power, malice wars with cowardice. Palaver crave security and loath being alone, yet the more trust it earns the more tempting betrayal becomes. Often, a palaver’s thralls are driven into combat with adventurers just so it can watch them die from the shadows and then introduce itself to its new potential companions.