Skip to content
Home / Delve into the Depths in the Kobold Blog / KotM2 Fight! Horakh 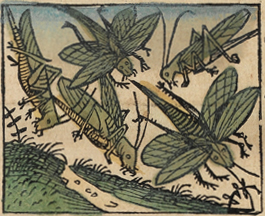 Welcome to the King of the Monsters 2 finals (see the list of finalists): the horakh is random finalist 3 of 10. These submissions are left almost entirely as they were received with the exceptions that all submissions are posted with an image and are standardized to KoboldQuarterly.com style. Let the fight commence!

In the deepest recesses of dank dungeons and underground caverns, life is short and brutal. Hideous creatures are locked in an endless battle for survival. Only the most vicious species live to breed and fight another day. One of the most feared subterranean denizens is the horakh, an insectoid killing machine with a penchant for consuming the eyes of its victim.

Horakh have powerful rear legs that allow them to make bounding leaps. Sharp hooks at the end of powerful claws allow them to climb any surface and latch on to prey. Their heads are dominated by scooped mandibles that can shoot forward like a piston, shearing meat from bone. Their black, chitinous thoraxes are nearly flat and topped by a translucent digestive sac—often containing half-digested eyeballs of varying sizes, colors and species…

Horakh in Combat: Horakh silently skulk at the edges of larger groups of monsters, waiting to pick off the weak and wounded. Eyeless beasts, such as grimlocks, destrachan, and gricks, have nothing to fear from horakh and often tolerate losing some spoils of battle to them for the sake of mutual protection. When attacking, horakh leap from their hiding spots while making a deafening screech. Generally, horakh first attempt to grab their target with a double slash attack and follow up with eye scoop in the next round. Horakh are highly mobile on the battlefield. If threatened, horakh leap back into the shadows to attack again from a more advantageous position. Horakh never fight to the death and flee if the assault goes poorly. Horakh have been known to harry adventuring parties over the course of multiple encounters, looking for a chink in their defenses.

Lore (Dungeoneering DC 17): Even battle-hardened dungeoneers quiver at the mere mention of the horakh. The bloodthirsty insects travel in small packs and make lightning-fast attacks against the weak or vulnerable. Horakh have specialized scooping mandibles they use to rip out the eyes of victims. Some say that after blinding their prey, horakh will herd the blind like sheep until they are ready to consume them and even use them as bait to capture other creatures. Many an explorer has been ambushed, blinded and condemned to death in the bowels of the earth by these predators.

TRAITS
Implant Egg
If the horakh reduces a grabbed creature to 0 hp, it jams its ovipositor deep into the target’s eye socket and inserts a pebble-sized egg. The target contracts horakh incubation disease (see below).

All creatures are deafened with the aura.

Attack—Melee 1 (one creature); +17 vs. AC
Hit—1d8+7 damage, and the target is grabbed; the horakh can only grab one creature at a time.

MOVE ACTIONS
Unnatural Leap • Recharge 4, 5, 6
Effect—The horakh can move 10 squares as if it had a fly speed (it must end its movement on the ground or by clinging to a surface with spider climb).

Once the egg hatches, the host organism is plagued by nausea and headaches. The hatchling will feed on the surrounding tissue and brain until the host dies: