Skip to content
Home / Delve into the Depths in the Kobold Blog / KotM2 Fight! Vital Necklace 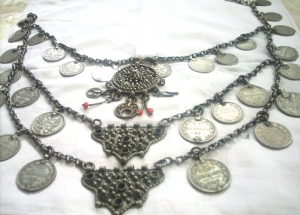 Welcome to the King of the Monsters 2 finals (see the list of finalists): the vital necklace is random finalist 1 of 10. These submissions are left almost entirely as they were received with the exceptions that all submissions are posted with an image and are standardized to KoboldQuarterly.com style. Let the fight commence!

A delicate necklace, mithril surrounding a large sapphire, agitates on the table then unfolds itself. Spindly legs lift it up as the delicate chain retracts into its body. Reflections slide across the polished gem as it turns, taking in the whole room. Suddenly it leaps and disappears into the shadows.

Most think of the grotesque horror of flesh golems or the bone crushing power of stone golems when they think of magical constructs. However, some constructs are more subtle—dangerous in different ways…

SPECIAL ABILITIES
Animated Chain (Ex) The necklace can use its chain to climb like a spider uses silk. The chain is animated and can move like a rope of climbing up to 10 ft., supporting the weight of the necklace plus its carrying capacity of 10 lb.

Gem Powers (Ex) The type of gem in the necklace determines the type of energy for its resistance and extra damage. (See the table below for details.)

Jewelry (Ex) When immobile with its legs folded in, the vital necklace looks like an ordinary piece of jewelry. An observer must make a DC 20 Perception or Appraise check to notice that the necklace is a creature. When worn, it occupies the neck slot for magic items.

Telepathic link (Su) The vial necklace does not have a mouth and cannot speak. It can communicate telepathically to its current master, sharing everything it sees and hears. This ability works out to a range of 1,500 ft.

The vital necklace is an animated magical construct, delicately crafted to fit the style and whims of its creator. It is possible to imbue one with a modicum of intelligence and to bond with it as a familiar using the Improved Familiar feat (7th level required).

A large precious gem and its mount form the body of the creature. The type of gem determines the necklace’s resistance and attack powers. Once constructed, this gem becomes inherent to the magic that animates the creature—providing a number of benefits to the necklace and its master—and it cannot be changed.

Once crafted, a vital necklace stays with its creator until death. When that happens, the necklace becomes inert until a new master appears. Some creators will give the necklace instructions on taking a new master; otherwise, it will generally only awaken for a master of similar alignment and demeanor as its creator. Occasionally, however, long eons of waiting will drive a vital necklace to be less selective.

Even with the resistance and extra damage provided by their gems, a vital necklace is weak in combat. When fighting, it climbs and uses the reach of its chain tail to stay away from its enemies, preferring to strike from the shadows above or behind. If bonded as a familiar, the vital necklace can ride on its master’s shoulder and deliver devastating touch attacks with its tail. If a vital necklace attacks somebody wearing it, it scores an automatic critical hit.

However, the vital necklace is best thought of as a subtle creature. Its abilities make it an excellent scout or spy. A vital necklace is sometimes used to guard treasure, lying dormant until an unwary thief tries to put it on.

A vital necklace is constructed from a masterwork necklace, using the finest metals surrounding a large precious gem. The necklace costs 3,000 gp.