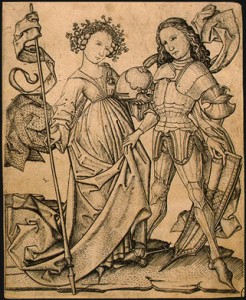 The towering spires of Bourgund gleamed on the horizon, but the city’s promised relief from the waste’s horrors seemed distant indeed with the rotting bulk of Zhergthoth—the Fallen One—between our party and the city. The once-writhing tentacles of the slain Old One lying desiccated in the dry desert wind, we picked our way maze-like between them and along the ruined road. The city seemed further away with each step.

“Sure that thing’s dead?” joked Reynaldo.

“If legend serves us,” replied Grovius, our arcanist. “What rots around us is the only known Wastewalker summoned during the Great Mage War to have been slain by human hand.”

“Certainly smells dead,” spat out Benoit as his drawn sword sliced absentmindedly into the nearby wall of putrid flesh.

All around us, blinking into existence as we stared dumbfounded, appeared Bourgund’s White Knights, each stepping forth from a brilliant pool of light, bannered spears held high and glorious, shining shields held aloft. One after another, they appeared until our party was surrounded by some dozen warriors in magnificently clean full plate surely never tested by war.

Unmoving as statues, they stared coldly through massive winged helms. Their intricate armor of white iron blinded us with the desert’s harsh light…

A single knight stepped forward. “What business with Bourgund?” The voice called out hollow, echoing in the knight’s great helm as his great banner fluttered. A distinct glare of magical fortification washed over his body although none nearby made a single gesture, and a powerful arcane aura surrounded him just as surely as the lilting fragrance of some heavy and intoxicating perfume.

Another stepped forward, his movements faster than any mortal man, perhaps augmented by some scrying warden-mage of Allain held in the kingdom’s sway. “The mercenary’s sword is stained with the ichor of the Old. It is he who trespassed.”

“Excellencies most high,” interjected Grovius, “we know not the law, and only seek shelter in your fair city. My companion thought nothing more than to disrespect the fallen evil’s form.”

“I… the…” again stuttered Benoit as his sword dropped as if to clean himself of the damning evidence.

Though he heard no other voice, another knight called out. “Watcher Mage Nigellimas reports their thoughts impure but not evil, Duke Tessellus. The wizard carries a staff of some minor power and potions of little worth, and the scrawny one an ill-gotten gem stolen from an unwed mother in Verrayne, but they do not truly test the Fallen One’s slumber. Simply adventurers, my liege.”

“How… wha?” stammered Reynaldo before a quick “hsssst!” escaped Grovius’s lips, silencing him.

“Proceed with caution toward our fair city, outsiders, but test not the slumber of the Old or the patience of the White Knights.”

Then, just as quick as they had appeared, they all took a concerted step backward into a pale aura and were gone.

“Don’t suppose they could have brought us with them,” snorted Benoit as he retrieved his sword and his composure. “Some welcoming party indeed.”

Against the stark contrast of the Wastes’ western border stands the gleaming jewel of Bourgund. Many remark on the impossibility of the city, nestled as it is so near the badlands with nary a crumbled tower or pockmarked wall to hint at the violent history of its struggle here so close to the front of the Great Mage War. Within its gleaming walls, order is all. The pristine streets are patrolled by the noble White Knights, their intricate armor perfectly placed with shining shields and embroidered banners that have not the slightest hint of dust or decay. Without, the massive body of Zhergthoth mummifies in the dry desert winds, well within sight of the city, the only wandering Old One of the Wastes to fall by the combined might of mortal magic and sharp steel. The corpse’s rot is the one foulness the citizens of Bourgund cannot easily erase although the heavy, intoxicating perfumes of their city are unrivaled across Midgard for their strength, longevity, and alluring fragrance. It is not lost in the minds of buyers that perhaps the world’s finest luxury comes from a citizenry so close to the unfathomably foul vastness of the Western Wastelands.

The White Knights are singularly unique in Midgard in that they hold some mysterious sway over the strange mages of Bemmea, who indeed swear some sort of odd fealty to the knights. Some speculate that Zhergthoth was set to crush Bemmea before its demise and that the mages are eternally bound to repay their saved lives. Others speculate of darker, more infernal deals masked by the pristine, grime-free facade of the great city. Whatever the case, the wizards remain unseen in curtained courts, yet they serve the White Knights each in turn, one wizard to one knight, augmenting their bonded warrior master with spells and sorcery from afar. Those daring to fight such knights find their blows turned against them, the knights awash in hastening magics, and their wounds magically healed right before their eyes. The knights rarely go mounted, rather simply appearing where their services are immediately needed, called into place as they are by scrying wizards who never stop watching the Wastes.

The Wasted West contains the Magocracy of Allain, the White Knights’ Kingdom of Bourgund, and many other intriguing areas. Want to help shape a world? Join the Midgard Campaign Setting Project.

6 thoughts on “The White Knights of Bourgund”