Skip to content
Home / Delve into the Depths in the Kobold Blog / Prepared!: Yobb’s Speck of Likely Lightning 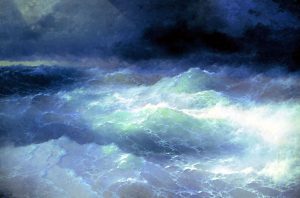 We get enough storms this close to the big drink, and more than we need at that. Now, just up the river a ways, where it gets wide and treacherous with rapids, there’s a tuft of dirt and trees out there in the middle. Yobb’s Speck they call it, after old Jan Yobb the woodsman—gods protect him, who first saw the islet’s unnerving quality. Whenever there’s a storm rolling through, the lightning visits there more than is natural. Crows love that place. Murders of them flap around and call in the rain and wind…

Yobb’s Speck of Likely Lightning is fifth edition location that challenges four 3rd- to 4th-level characters, and it includes the spire walker, a creature from the upcoming Tome of Beasts book from Kobold Press!

An islet in the middle of a wide and dangerous set of rapids hosts several fascinating secrets. Named after the local hero and accomplished woodsman Jan Yobb, the island’s small copse of trees and rocky ridge belongs to the fey. The leader of the fey community is an unpredictable spire walker named Emba. Emba and her sisters and brothers are very attached to their remote home, content that they alone know the islet’s secret. At the back of the cave in the rocky ridge is a craggy opening that leads to a very old set of stairs. A dwarven ruin sits under the region, hidden deep in the earth and secret to most. The fey explore the ruins at will, bringing up treasured baubles and coins, and competing with one another with ostentatious displays of shiny accessories. Emba has recovered a most impressive treasure—one she uses with delight whenever one of the region’s frequent lightning storms passes through. Emba’s Wand of Lightning is the centerpiece of the fey’s aboveground village. Her claim on the powerful magic item secures her status as leader. PCs wishing to visit the islet must overcome the swift river, unfriendly murders of crows, and the dangerous whims of Emba and her cadre.

Adventure Element A: The River

The river is 120 ft. across. The islet is located directly in the center of the river’s rapids; it forms a 40-ft.-diameter circular landmass. The PCs must cross 40 ft. of swiftly moving water before reaching the bank of the islet. Reaching the islet by boat is impossible owing to the rapids. PCs may have many ideas and plans on crossing the dangerous water. Assign ability checks and consequences as you see fit. The river is a medium hazard that rewards XP accordingly. Provided here is a guide you are free to use in part or in full:

Know the Waters. Any PC can make a DC 12 Wisdom (Survival) check to observe and assess the nature of the river’s current and its impact on the rocks. A successful check lowers the DC of clamber and pray’s Dexterity check by 1 for all PCs. Rangers, druids, or PCs with a background closely tied to nature gain advantage on this Wisdom check.

Toss a Dam. By lifting, rearranging, and throwing suitably sized stones, any PC can make a DC 12 Strength (Athletics) check to reduce the speed of the current in some areas; a successful check reduces the DC of the clamber and pray Dexterity check by 1 for all PCs.

Spot the Rocks. The least dangerous path across can be plotted by any PC making a DC 12 Intelligence (Investigation) check; successfully doing so reduces the DC of the clamber and pray Dexterity check by 1 for all PCs.

Clamber and Pray. Each PC must make a DC 13 Dexterity (Acrobatics) check while crawling across the rocks and rapids. A failed check results in the PC slipping and being carried a short distance over the rocks. PCs that slip must make a DC 12 Strength save to hang on, taking 8 bludgeoning damage or half as much on a successful save. A failed save also results in the PC losing 1d4 pieces of equipment (chosen by the PC) into the river.

The PCs eventually arrive on the islet.

Consider the following story hooks to draw the PCs to the islet:

Crows (five swarm of ravens/ CR 2) have been flocking to the islet since before the fey arrived. Drawn to something buried deep in the ruins, the crows’ disposition is soured by whatever lurks below. There is a good chance PCs on the river banks near the islet are attacked by the crows. They gain advantage on saving throws against being charmed and befriended. A speak with animals spell informs the caster that “a caw in the ground” is attracting the birds to the region.

Yobb’s Speck is controlled by Emba (spire walker). Though not evil, Emba has little interest in losing her domain or her magical staff to outsiders. After the PCs arrive on the island, the faeries are likely to play cruel pranks on them, needling them with darts and remaining invisible most of the time. If the PCs do not attack immediately, the fey on the islet agree to speak with them. Emba serves as their representative in this case. She may be persuaded to let the PCs explore the islet. DC 12 Charisma checks are likely required to maintain a conversation. Successfully talking to Emba reveals the following:

Volatile. Each time Emba reveals something to the PCs via conversation, roll a d6. On a 1 or 2, Emba’s mood changes to stormy and unwilling. Tensions rise, and a DC 12 Charisma (Persuasion) check is required to avoid combat.

Love of Magic. A DC 10 Wisdom (Insight) check made while chatting with Emba reveals that she is impressed with displays of magic. Casting spells (that do not target or harm the faeries) with visual effects makes Emba less unpredictable; she now only becomes volatile on a result of 1.

Storming Emba (combat encounter; CR 3). If the party ends up in combat against Emba, the fey inhabitants scatter into the trees and hide. Emba becomes invisible then flits high up a tree and rains down bolts from her wand of lightning. The wand has 2 charges remaining. After the wand is expended, Emba casts her own spells and uses her steeple step to teleport from one shrub or tree to another; she actively tries to remain hidden and avoid melee during the fight. Killing Emba results in the fey villagers fleeing across the river in a hurry.

Roughly 40 ft. in diameter, this small islet contains a dense copse of birch trees, and a rocky ridge that rises toward the north end. A low cave entrance into the ridge is seen through the sparse foliage. The air here feels charged, and it smells constantly of an approaching storm. Several tiny homes hang from the lower branches of the trees; made from bark and moss, they swing slightly in the breeze.

The islet crawls with insects and low CR fey. PCs arriving on the islet must contend with the fey’s leader Emba if they intend to explore. The fey residents live in crafted homes or in carved-out hollows in the rocky ridge. They are curious, and, along with their leader, they are likely to attempt a few cruel pranks against the PCs before speaking with them; stealing objects, casting minor illusions, a colorful competition of curses and insults are all possible tricks they may play.

A cramped space opens and descends toward the back. Scattered on the floor are several small piles of gleaming stones and scraps of metal. A cold draft blows from the darkness at the far end of the place. Deeper into the cave, you see hints of a stairway winding into the earth.

The cave contains 50 gp worth of precious stones that the fey pulled up from the ruins below. The stonework of the stairs is distinctly dwarven.

Aside from the gems in the cave, the only notable treasure is the wand of lightning. It begins with zero charges.

What cold thing calls from the ruins under the islet? How far do the ruins go, and what adventures await beyond the stairway hidden on Yobb’s Speck?