Skip to content
Home / Delve into the Depths in the Kobold Blog / Prepared!: The Room with Five Corners 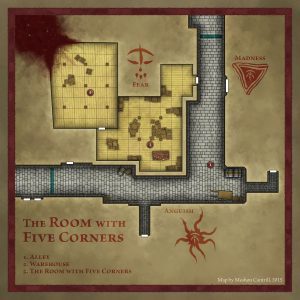 It’s true I used to run with the Untamed—back when Owl was the leader. I don’t associate with ’em now though—not after what I saw. I got a stomach for all manner of things, but whatever it was I spied through the door at the back of the hideout…a room with a wall changing shape; like a puzzle putting itself together—filled me with a kind of fear I ain’t known before or since. I can’t say what dark thing the Untamed are up to, but there ain’t a one of ’em casts a shadow no more—not that you’d see ’em out in the sun anyway.

The Room with Five Corners is an explorable fifth edition location designed to offer a hard/deadly challenge to four 6th- to 7th-level characters.

The Untamed are a street gang in a busy city. A recent change in leadership has transformed the members from pickpockets and second-story thieves into kidnappers for an interdimensional aberration named Xlrieh’oc. Their hideout is now a strange and wicked factory, capable of extracting the firm essence from a person; the process leaves victims partly ethereal and their forms no longer cast shadows. Most victims die during the procedure, while those who survive are conscripted into the gang. The extracted essence is crated and shipped to the aberration’s home plane via breach between worlds in the hideout’s backroom. The gang members have all gained the following:

Curse of Xlrieh’oc. Confers: resistance to nonmagical weapons (slashing, bludgeoning, piercing), +5 stealth, weakness to fire, disadvantage to all rolls made while in direct sunlight.

Three symbols, drawn in reference to Xlrieh’oc, maintain the portal to his realm and cause various effects upon the viewer. Once a PC has been affected by a symbol, or makes a successful save against its effect, the PC becomes immune to that particular symbol. If all three symbols are destroyed, the portal in the backroom closes. Destroying a symbol requires a DC 13 Intelligence (Arcana) check. Though this article suggests places where the symbols are located, you are free to distribute them as you see fit.

Refuse and rubble obscure the entry to this dark alleyway. Stepping over the open sewer channel, you are standing in a cramped passage between several warehouses. A lone rat regards you from its nest in a crumbled section of wall.

There are three gang members (scouts) and a hired doorman (gladiator) hidden in the alley. They attempt to attack the PCs by surprise. The Untamed have hidden the entry to their hideout well. Finding the door requires a DC 12 Wisdom (Perception) check. Scrawled on the door is a Symbol, Fear. Whoever finds the door, and whoever is nearby when it is found, are subject to the symbol’s effects.

A maze of crates fills the warehouse. Rising up to the bare wood rafters, the crates vary in size but consistently display an enigmatic brand. Pale violet light emanates from unseen sources. A small footpath winds its way between the stacked cargo.

The warehouse proper is currently unoccupied. Most of the crates are empty. In the midst of the crate labyrinth is the Untamed’s extraction table.

A long wooden table with leather-strap restraints is bathed in the violet light of several candle stands. Knives in dark scabbards lay on its surface, and a peculiar burn mark is found repeated near the collar restraint at one end. On the floor are two crates showing evidence of being recently sealed. A parchment is crudely nailed to the table; it hangs down apron-like from the table’s edge.

The parchment is a set of instructions for removing the firm essence of a mortal. It is written in an unknown tongue. Looking too closely at the parchment triggers the Symbol, Anguish that marks it; those looking and those nearby are subject to its effects. A DC14 Intelligence (Arcana or Investigation) reveals the diagram is a ritual object describing a surgical technique of sorts. Opening the crate requires a DC 12 Strength (Athletics) check. Inside the crate is a harmless white powder.

The Room with Five Corners

Peering through the doorway into the backroom, you are witness to a dizzying spectacle of nightmare. Before you is a plain chamber, breached along one wall by a geometric impossibility; a fifth corner has appeared there and yet the shape of the room remains square. Vertigo grips you as you glimpse a place beyond stars and time; words do not exist to name the feelings this dread spectacle evokes.

Two gang members (scouts) are passing crates to an unseen party in the extra-dimensional corner. Gang leader, Emit (priest) oversees the transaction. When disturbed, the members take half-cover positions behind crates near the portal. Two grells lurk in the rafters and attempt to float down behind the party once combat starts. The floor in front of the portal displays the Symbol, Madness; PCs fighting near the portal are very likely trigger its effects. Shortly after the grells descend, the PCs see the outline of humanoid stepping through the portal into the room. As it arrives, its shape transforms and a gibbering mouther emerges to joins the fight. Emit wears jewelry that evokes the Untamed’s previous simple thieving; a pair of gold cuffs (25 gp each), a silver ring with a small emerald (60 gp), and an empty pearl and gold locket (100 gp).

3 thoughts on “Prepared!: The Room with Five Corners”