Skip to content
Home / Delve into the Depths in the Kobold Blog / KotM Fight! Afanc 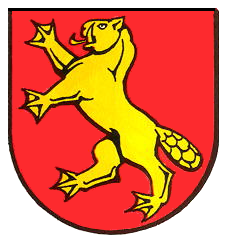 Welcome to the King of the Monsters Contest finals: the afanc is finalist 1 of 10. These submissions are left almost entirely as they were received with the exception that all submissions have had minor alterations for proper spelling (not grammar), formatting, and the addition of an image. Let the fight commence!

Swimming over the placid waters of the immense mountain lake is a monstrous, beaver-like creature of tremendous proportions. Countless bony protuberances emerge from its  neat wet fur like so many rock edges; the disproportionate rodent also has overly long central incisors, sharp claws at the end of its webbed feet, and a very broad, flat leathery tail. All of a sudden, the beast propels itself forwards like some oversized bolt, rushing and thrashing wildly in the direction of the nearest lake’s bank. The gigantic wave thus created escapes from its natural boundaries and continues its headlong course across the forest, devastating everything along its path…

The Afanc, which is also called Addanc, is a kind of giant beaver with a very bad temper that generally lives a solitary existence in a very remote lake or river. The afanc is very territorial and those who approach its’ water plan too closely are sure to incur its terrible wrath. Some pretend that afancs are demons, but this rumor hasn’t ever been proved. Despite their brutal dispositions the afancs are intelligent, capable of speech, and, if the legends are true, quite sensible to the charms of alluring women and equally responsive towards music.

[m] Cleave the Wood (free; at-will)
When the afanc delivers a successful melee attack with its bite it automatically destroys an object made of wood held by the target (weapon, shield, or else), including magical ones.

[c] Flood the Land (standard; recharge 5, 6)
The afanc makes a charge and must be in the water or cross a body of water in order to use this power; the mammal’s demented movements creates a gigantic wave that sweeps everyone and everything across its path. Close blast 5; +13 vs. Fortitude; 4d10 + 6 damage, and the target is pushed 5 squares, knocked prone, and is stunned (save ends). Miss: Half damage.

Thrall to Beauty and Music
A woman or a bard always has combat advantage against an afanc.

Afancs are very straightforward in combat. A lone afanc attacks with its’ flood the land power whenever it can, hoping to stun as many opponents as possible before closing in melee to tear apart or drown those still standing. Then, the afanc spends an action point to close the distance between it and its targets, or to deliver another attack swiftly if necessary.

On the other hand, afancs that are under the sway of a charismatic lady or female monster obey her to the best of their abilities. Though brutish and prone to succumb to the machinations of some alluring ladies, afancs aren’t stupid enough to sacrifice themselves in vain however, and withdraw if a combat is utterly lost.

A character knows the following information with a successful Nature check.

DC 25: Afancs are solitary creatures, gigantic beavers with impressive girths that affection primeval or retired water plans such as mountain lakes. They are dangerous foes, especially when confronted in their watery environments. Afancs can create enormous waves that can capsize a small raft or rowboat instantly or cause floods when they use their power repetitively.
DC 30: Afancs have a fondness for music, and can be sometimes tamed with a song. They also admire beauty, particularly those of women. Alas, some shapechangers abuse them with their all too seductive, illusory disguises more often than not.

Afancs are solitary creatures, but opportunist female monsters often take advantage of their weaknesses’ in order to use them as pet.

The afanc is a lake monster from Whelsh mythology.