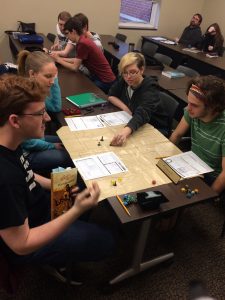 This past fall, I pulled off the greatest and sweetest Diplomacy check of my life: I convinced the Department of English at Winthrop University, where I am an instructor, that a course on writing narrative for tabletop roleplaying games would make a great addition to the department’s writing courses. It so happens that my acting chair had been looking for another writing class offering to aid the majors in completing their degree requirements, so she jumped at the chance to do something that could provide such a unique creative outlet for the students. The course passed through the curriculum committee with ease, and—Boom!—the course appeared on the Spring 2016 semester offerings—and, to my elation, it filled up rapidly.

So, now it’s February, and, as I write, I’m heading into Week Five of the course. Just like that, I convinced the university to pay me to teach people how to write for the hobby I love and how to play games. What a gig!

Okay, a tabletop game-writing class for college credit sounds very cool, you say, but what does this have to do with Kobold Press? Why is this story on this site? Ah, you see, I could not begin my class without sharing something of my own gaming passion with the students, not all of whom are even familiar with the TTRPG hobby—it wasn’t a prerequisite to enrollment. I am a big Kobold Press and Midgard fan, so in deciding my showcase game for introducing the class to the concept, I pulled out Tales of Zobeck and used a favorite convention adventure written by Wolfgang Baur, “Madman at the Bridge.” I knew it could quickly provide setting flavor, fun roleplaying opportunities, and combat—all the things I wanted to display about a game’s contents to newcomers—so it fit the bill. I then converted the adventure and its pre-gens to Castles & Crusades, as I knew it would be an easier d20 game for new players to grasp. Then, for two class sessions, I brought the map, dice, and figurines, and gathered four volunteers, and we jumped in. 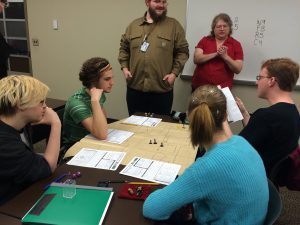 “Do you want to play the wizard, rogue, fighter, or cleric?” I asked the first four volunteers, quietly laughing to myself at what would come next—what always came next with this scenario’s pre-gens. The volunteers, all experienced gamers, selected a class, and I handed out the character sheets. After a quick scan, a student exclaimed, “Kobold! I’m a kobold?”

Damn, but that makes me laugh every time I hand out the characters.

“Yes! Absolutely! You are the movers and shakers of Zobeck. Nothing gets done in Zobeck unless you guys make it so.” A few smiled at this realization of compact power.

Then I directed them to the personality pieces I’d included on the provided sheets for the two female and two male characters. One of the males (the first set of volunteers were all guys) in the first session asked if he could change the female to a male for the scenario. “Nope. You play what you get,” I said, stressing that “play” was the operative word in this instance, as I then informed them that roleplaying is a part of the gaming process, and that we would not just looking at game mechanics and building settings around them. For the female wizard I’d included a note that she disliked males ordering her around and was, in fact, the leader of the kobold feminist movement in Lillefor, so her player then quickly decided “she” would be party’s leader when I asked who was taking that job. “She” fell into character quite easily. Those watching the gamers enjoyed the added humor, especially as one of the other pre-gens’ personality indicated that he was interested in proving himself worthy of the lady wizard, and he played this to the hilt. Class ended before I knew it, but we’d experienced the fun of gaming for 50 minutes in a college classroom.

Since those two sessions, I opened the gaming up for others to run things. So far, we’ve had D&D fifth edition, Mage: The Awakening, and Dragon Age at the table. We are writing our project for Pathfinder, but we are studying Savage Worlds and Rogue Mage as other types of available systems. Many of the experienced gamers in the class are currently playing fifth edition. 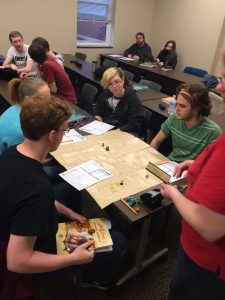 With the Kobold Overlord’s permission, I’ve been using pieces of Midgard material as examples for the things we are building in class: a town setting, denizens, locations, ruins, and short adventures. I’m running the class like a small Open Design project. To date, they have pitched setting proposals, voted on their setting, been assigned sections, and are creating the campaign from a lead developer’s vision of his winning pitch.

Ah, it’s been just another day at the great collegium, and we are madly enjoying our games.

6 thoughts on “Madman at the Collegium”