Skip to content
Home / Delve into the Depths in the Kobold Blog / KotM Fight! Echidna 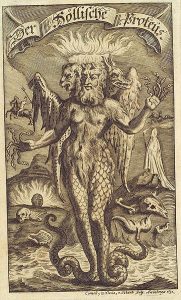 Welcome to the King of the Monsters Contest finals: the echidna is finalist 2 of 10. These submissions are left almost entirely as they were received with the exception that all submissions have had minor alterations for proper spelling (not grammar), formatting, and the addition of an image. Let the fight commence!

From above the waist, this creature appears to be a lovely human woman, but below is a foul, serpentine dragon with glistening blue-black scales and a tail ending in a wicked stinger. A reeking multitude of frogs, toads, newts, and snakes—all blind and deformed—creep and slither upon her bloated abundance and crawl in and out of her gaping mouth…

An echidna is much dreaded for her ability to spawn horrendous monsters of all manner and form, including such familiar terrors as chimeras, hydras, gorgons, and fiendish serpents or lions. Invariably female, an echidna is unnaturally fecund and can interbreed with nearly any living creature; furthermore she is almost always pregnant. Her offspring are generally magical beasts, though echidnae have been known to birth dragons and monstrous humanoids as well. The specific creature that is born appears to be determined less by the father and more by some perverse capriciousness.

These mothers of monsters dwell in gloom-filled caverns along with their teeming broods. An echidna delights in spreading corruption and destruction; she likes nothing more than to coerce, seduce, or cheat a hero into dallying with her just long enough to father several new horrors. Later the echidna sends these children off to torment their sire and the rest of humanity.

TACTICS
Before Combat The approach to an echidna’s lair is usually guarded by various magical beasts willing to die for their mother. The sounds of their defense alert the echidna to intruders.

During Combat The echidna opens most encounters by wading into melee and using her loathly gout against spell-casters. She generally uses a full attack during her normal initiative and saves her special abilities for ranged opponents on her second initiative count. The echidna shrewdly employs dimension door to position herself most advantageously on the battlefield. She conserves heal until after her spawn progeny ability has been triggered.

Morale Should the echidna feel overmatched she will attempt to bargain, intimidate, or seduce her opposition into a truce. If negotiations fail she then fights to the death.

Loathly Gout (Su) Once per day as a standard action the echidna can vomit forth a loathsome plague of tiny toads, frogs, newts, and snakes. Treat this effect as four adjacent centipede swarms with the following adjustments. The swarms appear within 30 feet of the echidna, including spaces already occupied by other creatures. The swarms have 60 hit points each and deal 4d6 points of damage with their swarm attack. A DC 26 save resists their poison and distraction effects; the DC is based on the echidna’s Hit Dice and Constitution score. The swarms persist for 10 rounds.

Spawn Progeny (Su) If reduced to half her normal hit points or less in combat, the echidna automatically rears back and forces one of her unborn progeny to burst forth from her scarred and distended belly. (For a standard echidna, this ability is triggered whenever she is brought to less than 113 hp.) Though grotesque, this birth does not harm the echidna. This is an immediate action that can be used once per day. A progeny is a fully-grown magical beast under the control of the echidna. It emerges within 10 feet of the echidna and can act immediately. Typical progeny include a behir, chimera, eight-headed hydra, or gorgon.