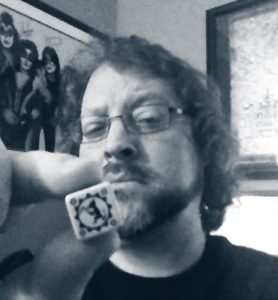 Marc has been steering the art direction boat at Kobold Press for a while, giving each product its distinctive look. He’s also an artist, providing black and white illustrations, and is a talented designer, whose adventure “Shadows of the Dusk Queen” is a delight to players and GMs alike. To celebrate 10 years of Open Design, Marc answered a few questions for us!

Q: How did you come to be associated with Wolfgang and Open Design/Kobold Press?

It all started with the Spell-less Ranger! When the Pathfinder RPG Beta was released, I loved what Paizo had done, but I was bummed that the ranger was still a spellcaster (I’ve always been firmly in the ‘Aragorn didn’t cast spells!’ camp ). So, I wrote up a variant class called the Spell-less Ranger and submitted it to Kobold Quarterly. It was published and became rather popular, which lead to some additional articles of mine also being published. I also starting doing some BW illustrations for Wolfgang here and there and, eventually, also started doing some graphic design and layout work. Over time, I did more and more of the graphic design and layout, until eventually Wolfgang asked me to officially become art director

Q: Walk us through the process of being an art director for a project, say a setting book like Southlands or a GM accessory like Tome of Beasts.

Ha ha . . . how long do you have? The first part of the process involves working with Wolfgang to understand the scope of a project—is it a hardcover, softcover, or PDF for instance. Will it be BW or color? How much art (and what kind of art) do we want, and what is the art budget? The same types of questions are discussed regarding cartography. From there, I contact artists (either from our stable of established regulars, or sometimes new artists I want to try out), assign the art, write art briefs, and then generally work with the artists so we end up with the most awesome art we possibly can!

The second part of the process comes once the final art is in and I receive the final, edited manuscript. That’s when I start working on the actual layout of the project and where it really all starts to come together!

Q: Has Kickstarter changed the game dramatically in terms of art direction? I look at the expansion of artwork in books in just a few years, say the difference between the Midgard Bestiary in 2012 with the Tome of Beasts due to come out this year.

Absolutely! Prior to things like Kickstarter, you took more of a risk when you produced a book—you had to figure out how many copies you thought a given book might sell, how much you might make, and so on. You then had to decide how much you were willing to spend on art and maps, which often meant you might need to settle for less art or maybe use BW instead of color. With Kickstarter, the public tells you up front! If a project funds, or even does a little better than you expected, you can figure out exactly how much you can spend on good, quality art and maps. If a project absolutely explodes (two perfect examples: Deep Magic and the Tome of Beasts!) then you can add MORE art and you can work with the top artists so all that art is AWESOME!

Q: You are looking at new ways to present design and layout of different products. Take the current run of adventures. How has layout and design and art placement changed since the earlier Open Design products?

Well, I wasn’t involved with the early Open Design projects, so I can’t really speak to them. I will say, though, that I’ve worked very hard to ensure that everything Kobold Press does has awesome art; clean, well-designed page treatments; great trade dress; and a dynamic graphic presentation. The reality is, no matter how amazing the content is . . . if the product isn’t visually appealing, most people will pass it over for something else. More importantly, once folks actually dig into your product, well-designed, interesting pages with great art help keep the reader interested, excited, and engaged in the content so they can navigate smoothly through the product.

As the company continues to grow and expand, it’s very important to me (and to Wolfgang as well) that Kobold Press products have the best art and the best overall look possible. My personal goal is to have folks open up every Kobold Press book (or view every Kobold Press PDF) and, before they’ve read a single word, their first thought is “WOW!”

Q: What has been the most gratifying project you’ve worked on with OD/KP? What made it so?

There are so many! If I had to pick just one, it would have to be the New Paths Compendium. Although I also did the layout and graphic design for that book, I’m proudest of the game content itself. I wrote the majority of the material in the NPC (although some excellent additional material was contributed by other talented designers) and I’m really, really proud of that book! In fact, I have a number of additional classes designed and I’d LOVE to see the New Paths Compendium expanded into a hardcover some day!

Q: Certainly, in your long tenure, some interesting or stressful situations have developed. Would you care to share a tale or two?

I think working of the Tyranny of Dragons books for Wizards of the Coast was by far the most challenging! The simple fact that they were still finalizing the game while we were working on the adventure made it quite a project, as you might imagine. I remember spending more than a few very long, very late nights revising the layout because various things had changed. Having said that, the folks at Wizards were great and I was thrilled to have been involved! After all, as someone who grew up playing AD&D as a kid, and who dreamed about how cool it must be to work for TSR and create all those wonderful books and adventures . . . seeing my name in a series of official Dungeons & Dragons books from Wizards of the Coast is something I wouldn’t trade for anything in the world!!!

Q: Thematically, do you have the luxury of building an art theme for a project, or is the trick simply to assign an art order to an illustrator who has a style that fits the assignment best?

Good question! I definitely think a lot about the theme and style of each product and absolutely assign artists that best fit. Fortunately, we have a great stable of artists and I know their styles, their strengths, and their weaknesses very well, so it’s usually pretty easy to decide who might be best for a given project

Q: Many times you are working with aspiring artists. It may be some of their first professional work, correct? Does your role involve as much coaching and shepherding as it sounds?

Typically, we work with fairly established artists, but we do also sometimes work with more up-and-coming artists as well. In those cases, I definitely work more closely with them and try to help them deliver the best art they can.

Q: Talk to us about your role as a writer. What are your goals when crafting an adventure?

I love to write (I just wish I had more time to do it!). Probably my favorite thing to write/design are classes. I get really excited about a new class when it starts to come together, and I seem to have something of a knack for class design. My newest class is the trickster, a Pathfinder class that combines arcane magic with roguish skills!

I also like adventure writing, although that doesn’t seem to come quite as easily to me as class design does! When I write an adventure, I try to strike a balance between the more straightforward simplicity of those classic AD&D adventures (which I LOVE) and the more complex nature of most modern adventures.

Since we’re on the subject of adventures, I’m extremely proud of my first one for Kobold Press, Shadows of the Dusk Queen, and I hope everyone checks it out! :)

Q: Do you come at this from a player’s perspective or, now that you’ve seen how the sausage is made, from a creative direction perspective. Is it hard to take off the art director hat and put on the GM/Designer hat?

An EXCELLENT question! It is sometimes hard to keep my roles distinctly separate (and I’m not sure I always can . . . .) There are many times, for example, when I’m laying something out, I run across a bit of prose, or a rules element, and I think about how I would do it differently. In fact, I have been known to shoot an email to Wolfgang, or the editor and/or developer, noting something I think might need changed. I try not to do it too often though :)

Q: Share with me those times where the illustrator and the concept for the piece really came together to create something stunning—something that exceeded expectations and really matched subject matter to the art. (For me, the chapter page for the Grand Duchy, the Imperatrix on her throne, was one such piece. She is the Grand Duchy, and the Grand Duchy is her.) Are there others that come to mind, and why?

That happens fairly often, in fact, which is great! One perfect example just off the top of my head is the cover art for Deep Magic. It was in the early stages of planning out what that book would be and what it would look like. We were trying out a new artist (new to us, that is!) for the cover, and the resulting cover was just stunning! Not only was it stunning, but I think seeing it really helped to define a lot about what Deep Magic could be. I know it helped me to lock in on how I would approach the book’s layout and overall look!

Q: Fantastic images that make a lasting impression. What RPG products (or non-RPG products, for that matter) have served as your inspiration when putting together a big book for KP?

Heh . . . everything and anything can be an inspiration! The way two colors look together on a magazine cover in the doctor’s office; a cool-looking title treatment on a TV show . . . anything! I almost always have a notebook with me so I can jot down a thought, or sketch out a quick idea. As far as RPG products, you can’t go wrong emulating your peers! Paizo’s books are amazing visually, as are Wizards of the Coast’s, and many of the other bigger third-party companies. If someone looks at a recent Kobold Press book and feels it looks every bit as good as something from Paizo or Wizards, I’m a happy guy!

Q: To conclude each interview, I’m asking each person to think about something fantastic or wonderful (or scary) from all the KP products that would make an awesome gift for Wolfgang. Basically, let’s fill up Wolfgang’s garage with weird and wonderful stuff. What gift would you choose and why?

Hmmm . . . well, I happen to know just how much Wolfgang LOVES RPG monster books, so, in an odd way, I think doing everything I can to make the Tome of Beasts as visually awesome as possible just might be the best gift I can give him!

That, or maybe a box full of obscure, German hardcore metal CDs :)

Congrats on 10 years of Kobold Press, Wolfgang! Here’s to another 10!

5 thoughts on “Interview with Marc Radle”