Skip to content
Home / Delve into the Depths in the Kobold Blog / Book Review: Rise of the King, Companions Codex II, by R.A. Salvatore 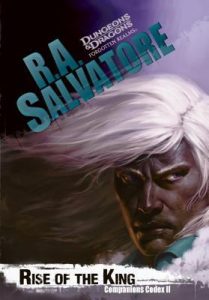 The orc has really hit the fan—actually the orc, the drow, the frost giant, the goblin, and the white dragon have all hit the fan and once again the fan is the Silver Marches. As Drizzt and the Companions cross the land to finish laying the soul of one of their long-time allies to rest, they learn of the extent of the peril that the cities and citadels of the Silver Marches are actually in. This peril is led by the ever-scheming drow, who are not only trying to further themselves but who are doing the will of their vengeful goddess. The dwarven citadels are surrounded above and below ground, and any efforts to reinforce the besieged cites near them will lead to their fall. The drow have divided and are poised to conquer. Will the Companions overcome this monstrous incursion, or will the Silver Marches finally fall?

If this sounds like a book written by R.A. Salvatore that you have already read, you wouldn’t be completely wrong. Events like this have happened before in different forms with less powerful enemies. There comes a point where, as a reader, I stop caring about the fate of the ever tenuous alliances in the Silver Marches, and this series put me at that point. Salvatore’s writing skills and his exploration of some characters that have not gotten the spotlight in the past are about the only things that kept me reading this book or this series. The whole reincarnation of heroes who should have stayed dead was bad enough, but to add insult to injury, here they are fighting the same old battles that they have fought in the past, and many of the characters really haven’t changed as much as you think they should have.

No one can doubt Salvatore’s writing skills. He knows the setting and the characters intimately. They are his children and he has raised them. He can write a fight scene that isn’t soon forgotten. The intrigue that permeates everyday drow life is not easy to keep track of. I would venture to say that at one point or another even the grand master Salvatore has had to do a few double takes to make sure something he has written fits into the complex and tangled web he weaves. His godlike knowledge of the setting and characters combined with those mad skills that I mentioned were the life-line of this book.

Regis, also called Rumblebelly, has really stepped into center stage and has evolved from a whiny mostly ineffectual combatant to quite the fighter. Sure, he still does thief stuff, but his willingness to engage in bloodshed to help his friends is unprecedented. I’m not a huge fan of his pining away for a lost love—not every part of the story that he is involved with had to end with him starry-eyed and lamenting their separation. Like orcs attacking the Silver Marches, I stopped caring about the twentieth time it happened, and that wasn’t even halfway through the first book. It settled down in this installment, but I still really don’t care and I have a feeling I am supposed to. I also think Wulfgar hasn’t developed one bit—sure Salvatore has made him more introspective, but when it comes to fighting, he is an idiot. I get he is a barbarian, but he has acted more like a 12-year-old boy playing his first 1st-level barbarian all the way. You would think he would get it this time around….

Minus a few gems here and there, this entire series feels like a homage to all the fans who just couldn’t stand to see the end of the Companions. Wizards of the Coast isn’t stupid—they know that anything with Drizzt on the cover will sell books, and they are right. In a small way, this series actually feels like a sell-out and that makes me sad. This novel has also proven to me that Drizzt fans are so entrenched in wanting to see the same characters with the same animals wielding the exact same equipment all of the time. Is it any surprise that Bruenor has all of his old equipment? And, at one point in the book, Wulfgar was separated from his war hammer, captured, and almost died (that has never happened before….). While escaping, he just happens to run across the orc that found his weapon, and he leaves battered and bruised but with his hammer that everyone seems to love.

If you are a fan of the Companions, then you will love re-reading the same story about them again and again, and the money you spend to reread that story will not bother you one bit. If you have grown weary of hearing Drizzt mull over the nature of good vs. evil or of seeing Wulfgar make bad tactical decisions, then trust this review, reread another Drizzt novel you’ve already paid for, and let a fan get you caught up on the events of this edition of “enemies attack the Silver Marches and the Companions come in and save the day.”