Skip to content
Home / Delve into the Depths in the Kobold Blog / Open Design 003: Kobold Quarterly 10 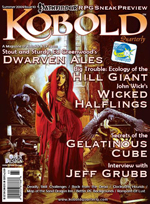 Welcome to the Open Design Podcast, a discussion about game design and game mastery with hosts Wolfgang Baur, Ed Healy and Rone Barton.

John Wick created Legend of the Five Rings and 7th Sea for Alderac Entertainment Group, winning four Origins awards in the process, before moving on to start Wicked Dead Brewing Company with Jared Sorensen. Last year, John released the long-awaited Houses of the Blooded, which sold out in under a week. He’s a brilliant designer and he agreed to share some wisdom with us.

John’s Open Design credits include the Wicked Fantasy series – articles about classic fantasy races, but with a twist. The first installment is in the recently released Kobold Quarterly Issue #10.

Dan Voyce has been a patron on numerous Open Design projects, including Wrath of the River King, Tales of Zobeck, and both editions of Halls of the Mountain King. We asked him to come on and talk about patronage, and his journey from patron to contributing author.

Tim and Eileen Connors have been collaborating on adventures and magazine articles for the last three years, first in Dragon and Dungeon magazines, and then for Kobold Quarterly. More recently, they have contributed to various Open Design projects, including the Tales of Zobeck anthology. We spoke with them about their work, and about working together.

If you enjoyed this episode, consider subscribing so that you’ll be notified when the next one is released. Feel free to drop by the Kobold Quarterly forums to tell us what you think as well.